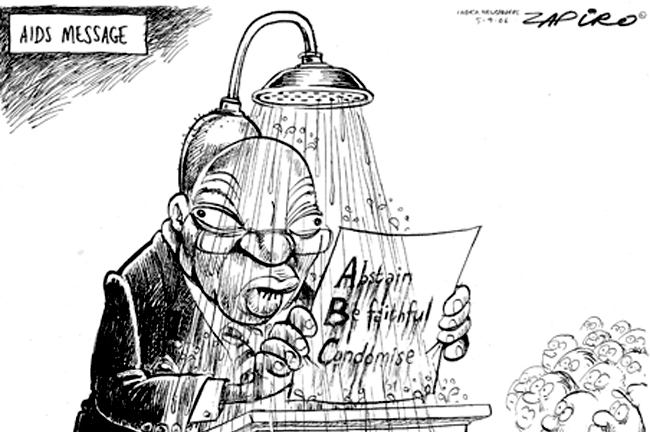 It must be the most famous shower in South African history. The one Jacob Zuma took just after you-know-what happened, back in 2006. Boy, he must regret it. But he has not been allowed to forget it. Zapiro, or Jonathan Shapiro, has referred to it in almost every cartoon since. Now, someone new has had enough, this time very politely so. By STEPHEN GROOTES

Zapiro rocks. It really is that simple. Who else can draw Air Force One as an obviously tumescent phallus and get away with it. Or a machine gun shooting ammunition that clearly swims down a birth canal, or that dent in the head that says so much. Especially when the cartoon features so many babies with a similar dent. No one else has so accurately portrayed our post-1994 politicians’ foibles and nonsense as well as Jonathan Shapiro. His hero, Don Martin, looking down on our madding crowd must be justifiably proud. But there are many who are not. One of them, in particular, has decided to do “something” about it.

His name is Wesley Mabuza. And his title is the Reverend Dr. And he’s not your average political schemer. He’s a man of some thoughtfulness, of some soul if you like, someone who has actually applied mind before tongue. He’s the head of the – deep breath now, you’ll need it – Commission for the Promotion and Protection of Cultural, Religious and Linguistic Communities. Now exhale … slowly.

You haven’t heard of it before? It’s an organisation that rarely sticks its head above the parapet. It’s a Chapter Nine institution, and occasionally it will say something and then disappear. We remember one unforgettable occasion when it held a press conference to defend Tony Yengeni for killing a bull when he was released from prison. The first question from a less-than-awed hack was, “I’m sorry, but who the hell are you?”

Well, now it has itself some PR. Mabuza has written an open letter to Zapiro, asking him – asking him, note, not telling – to please stop drawing President Jacob Zuma with that bloody showerhead. Mabuza is not dogmatic about it, he’s not going to force in any way, or even in anyway attempt to force Zapiro to stop doing it (he doesn’t have the power, after the Human Rights Commission ruled in Zapiro’s favour on that “Rape cartoon” case, any court would likely agree). He’s asking him nicely.

There are several arguments. Some are easy to bat aside, some are not.

To put it concisely: “You shouldn’t dis the President”. Ja, but “it’s still relevant” is the answer. “He is the President. He spoke about showering as a form of HIV protection, and stuff this big-man stuff anyway”. Okay, “But what about his children”. “I’m sorry for them, but if you go into politics grow a thick skin.”

How about, “The majority of South Africans elected him and you should respect that”. “Sure, but they voted for the ANC, not the man, and see answer (a).”

Okay then, “There are people among us who went to Botswana and planted bombs and killed people there, you don’t draw them every day dragging corpses around.”

“Ah. That is different. It’s a good point. I suppose none of them are in public life, but hmmm, let me ponder that.”

Unfortunately, all of the above, fun as it is, misses one fundamental point. Zapiro is using the showerhead to signal his disapproval of Zuma, not just of the man, but of his performance as president, of his policies, of how things are going, of the direction of the country. You may remember he went through a phase where the showerhead came off (after a cartoon showing Zuma trying to remove it with various dangerous implements with the message “Just govern well and it’ll disappear”). It hovered in the background for a while. Then Menzi Simelane was appointed head of the National Prosecuting Authority, and it was bolted squarely back on Zuma’s head, where it’s remained ever since.

It’s easy, as a journalist, a member of the chattering classes, to simply be a cheerleader for Zapiro. It’s fun, he’s bloody good and he is killingly funny. But we mustn’t forget that this stuff only appeals to a small sector of our population. There is a large group of people, perhaps a majority, who do find this deeply offensive. It’s not only unfunny, it’s hurtful. These are people, and this is a very legitimate point of view, who feel that the person who was elected president deserves respect, if only by virtue of the position he occupies. He is the symbol our country and thus should not be shown too much disrespect.

This is not the same as saying he should not be criticised or the victim of satire. It’s just that, for many South Africans, there is a line and Zapiro should look way behind him. And it’s also the constant nature of it. The idea that Zuma has not been forgiven for something of which he was acquitted and for which he has apologised. For these people, Zapiro should just let it go.

We’ve said before and we’ll say again, when it comes to arguments about media freedom, when Gwede Mantashe and the ANC claim a majority of South Africans do not necessarily love the media, we should take them seriously. We must not presume that everyone agrees with Zapiro and thinks he should just be allowed to gaily get away with abusing the president.

That doesn’t mean Zapiro should stop. What it means is the media needs to make the case, in careful, thoughtful language, for Zapiro to continue. And it mustn’t just be “He has a right to, it’s freedom of speech”. It must be more nuanced than that. It’s not a “He can, so he will” argument, it should be a “He must and here’s why” argument.

Zapiro is a thoughtful man who is a hugely important voice in our politics and our country. Already he has responded to requests for comment on Mabuza’s letter. He’s done radio interviews and there are probably more to come. But it would also be a good idea for him to write his own open letter to Mabuza. Something thoughtful, something that justifies why it is still important to keep the shower on the head. It would be a really good start to a debate we should have. That will open minds. That will end with Zapiro still drawing his cartoons. And, once people have been convinced of his arguments, he will have more fans than before. DM