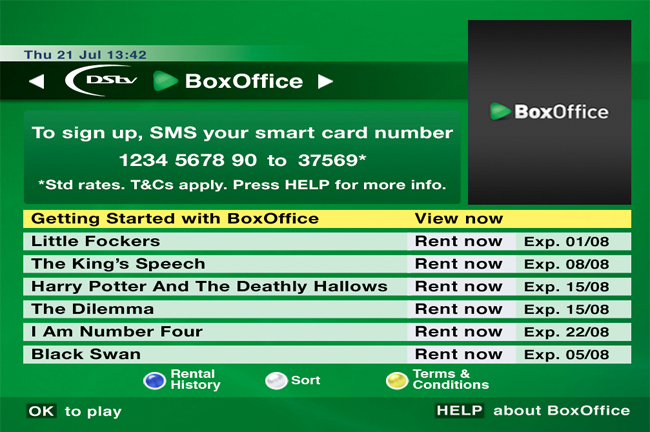 DStv Box Office will be available to DStv Premium subscribers only, for now. And only if they have a PVR decoder. Multichoice launched the service with a 48-hour for R25 offering. There are currently 15 popular titles available on DStv, which doesn’t seem like much.

Speaking at the launch, DStv Online CEO John Kotsafatis said they were constrained by the fact that they were using the PVR decoders to download and store films, making them available for rent once the user had paid. The titles on offer would be constantly renewed as studios released them.

Kotsafatis said they planned to make DStv Box Office available on the Internet for non-DStv subscribers by the end of the year. The service wouldn’t allow video streaming, due to South Africa’s ultra-slow broadband speeds. Multichoice plans to make up to 40 titles available for online rent at a time. Oh, and unfortunately for the more lascivious among us, they will not be offering pornographic films for rent.

Kotsafatis explained that a film downloaded onto a computer would come wrapped in DRM (digital rights management) software that would automatically delete the rented film after 48 hours.

DStv users who wish to rent a film would have to press the green button on their DStv PVR remote controls, which would take them to the “Box Office” page. Once the user had gone through the process, involving SMS confirmations and either a credit card, or account (separate from their DStv account). Once payment had been made, a code would be sent to the user’s cellphone via SMS, at which point the film would be available for 48 hours.

According to Kotsafis, DStv had positioned itself between television and cinema, as do video rental stores. This means the films available on DStv Box Office will have been on circuit at cinemas for eight weeks or so, but still months away from being offered for free on television, whether subscription or public viewing. This is nothing like Netflix, which only offers titles once they’ve appeared on TV.

DStv Box Office is not positioning to be in direct competition with DVD peddlers and stores like CNA and Look & Listen that sell DVDs, nor indeed is it supposed to be in competition with its own channels that show blockbuster films. The rights purchased by Multichoice for Box Office will allow them to rent out films just as they hit video rental stores – which could be up to eight months before they are licensed out to television networks. You even get the sense that the video-on-demand service isn’t really in competition with video rental stores – what it really offers is a perk to DStv PVR users. So even though the market for DVDs is gigantic and certainly not limited to video rental stores, Multichoice hopes to have made its money from renting 15 blockbuster titles long before you can pick them up in Musica or a flea market.

“One of the limitations we will always have is the amount of broadband available in this country,” Kotsafatis said. “So that will hamper uptake for some time. What we’ve done to get around the broadband problem is that we will push the video onto the device, either a PC or a Mac, and then let you rent it from there.”

Kotsafatis would not reveal how many PVR and online users Multichoice was aiming to reach. He said, in the interim, the biggest chunk of DStv Box Office users would access it via PVR, but the company anticipated that, with improvements to broadband speeds in SA, online would eventually take off and surpass PVR users in volume.

Even though DStv Box office will have a Hollywood slant, Kotsafatis said it was open to talking to local studios as well. “We’re trying to talk to as many local producers as possible, and trying to find those real, big ‘blockbusters’. We’ll consider them as independents.”

If you’re a video rental store owner, you needn’t sell your business just yet. Broadband constraints mean that even for the online offering, uptake will be very slow – and there’s just no way that offering 40 films is competitive, when compared to a store full of DVDs and a range of products from games to entire television series for rental. And for now, the PVR option is only available to premium users (R599 a month for that, plus R65 for PVR access). Even when DStv Box Office becomes available to most DStv users, video rental stores will still have their place in South Africa.

Unless by some miracle 20 undersea cables land on the coast within the next five years. Then there may be cause for panic. DM