UK: The day the News died

UK: The day the News died 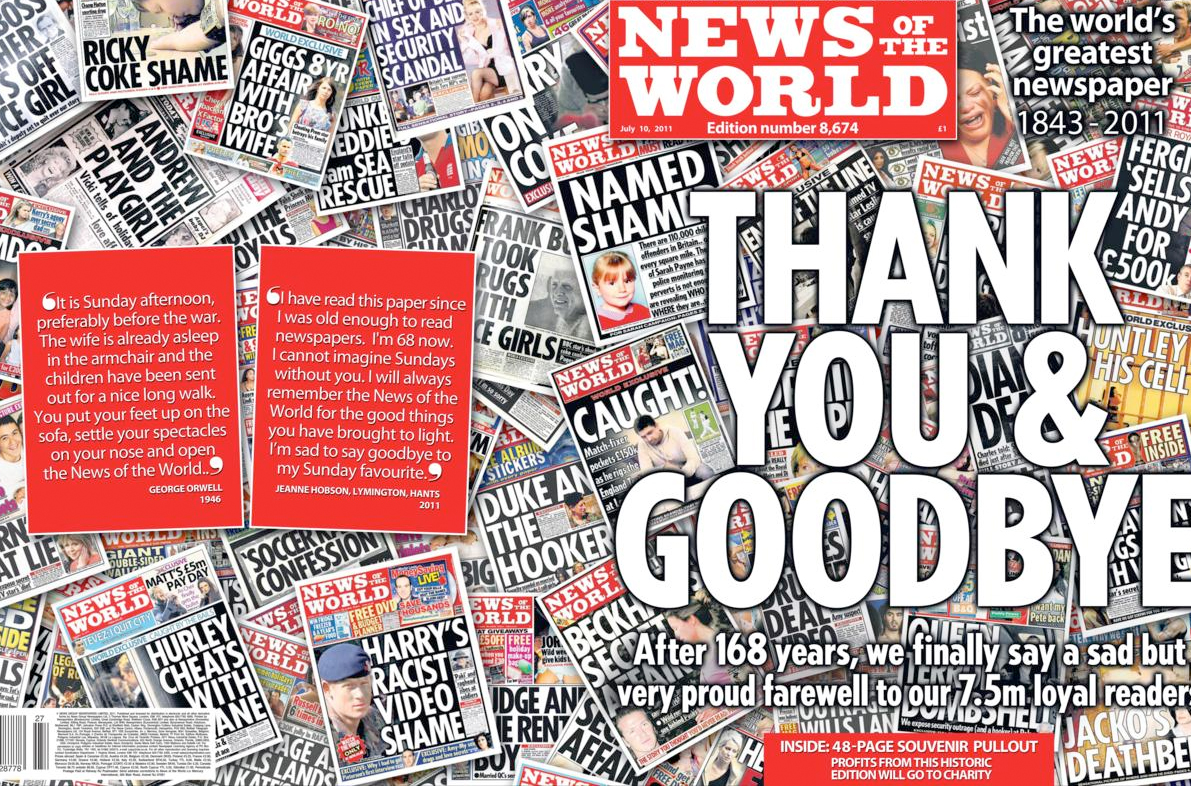 “All human life was here”, ran the heading of the 48-page souvenir pull-out in Sunday’s last edition of  News of the World. “As long as it involved paedophiles, royals or extramarital sex,” you might be tempted to add to that sentence after flicking through its selection from 168 years of lurid front pages.  After 8,674 editions, the world’s self-proclaimed “greatest newspaper” is no more. By REBECCA DAVIS.

The tone of yesterday’s final incarnation of the paper was a mixture of self-congratulatory nostalgia, muted contrition and – particularly – defiance. The phone-hacking scandal definitely, absolutely did not involve anyone currently at the newspaper, readers were repeatedly told. Nobody had a clue.  Nobody had ever heard of such a thing going on, and whoever was doing it was scum who left the paper years ago.

Yet in a week where public outrage in the UK over the phone-hacking reached fever pitch, apologies had to be made.

“Phones were hacked, and for that this newspaper is truly sorry,” the full-page farewell editorial read. “There is no justification for this appalling wrongdoing…Yet when this outrage has been atoned, we hope history will eventually judge us on all our years.”

Notably absent from the flavour of the valedictory edition was the anger felt by NOTW staffers. The Telegraph reported that former editor Rebekah Brooks recruited two loyal journalists for sister paper the Sun to comb through NOTW before publication to ensure no digs at Brooks or News International made it into print. They succeeded, with the exception of a number of suspicious clues to the paper’s cryptic crossword. “Mix in prison”, was the clue for 23 across. “String of recordings”, 18 across; “Will fear new security measure”, 8 down. 24 across, “Woman stares wildly at calamity”, is thought to be a reference to the widely-circulated photograph of a grim-faced Rebekah Brooks looking out of her car window as she is driven away from the newspaper’s HQ after the announcement of its closure.

The tabloid’s demise dominated the front pages of most of the other Sunday reads. The Sunday Mirror was an exception, choosing to prioritise speculation on whether singer Cheryl Cole would return to her footballer ex, Ashley. The Daily Star also went against the grain, selecting to lead instead with the news that Prince William has accepted an invitation to be the godfather of David Beckham’s next child – a type of story known in the industry as “total bollocks”.

The staunchly pro-Tory Mail on Sunday managed to find an angle to the phone-hacking story to spin what is clearly a PR fiasco for the Conservatives into bad news for Labour: “Blair ‘tried’ to hush up hacking scandal”, their front page proclaimed. The Guardian’s Sunday arm, The Observer, avoided obvious gloating, but devoted a full 11 pages to the story. News International’s other Sunday publication, The Sunday Times, ran a low-key front-page headline, but inside featured a four-page spread on “The Tabloid That Died of Shame”. All indications are that The Times and The Sunday Times have managed to avoid contamination from NOTW because the public is unaware that the titles are linked. This association is not something the Sun has been fortunate enough to escape, however. On Saturday its front page was devoted entirely to an exposé of rising gas prices – essentially the equivalent of shouting “Everyone, quickly, look over here instead!”

For the NOTW, however, the question was: How to cover the news on a day when you are the news? With the exception of the souvenir pull-out, the answer to that was largely, business as usual. Global news was taken care of in a 10cm column summarising  six countries’ affairs in no more than 20 words. There was, of course, an undercover investigation. There was always an undercover investigation. This one was a sting operation where they trapped a Bulgarian sex-trafficker. There was no mention of his voicemail.

Plenty of celebrity news featured – Gwyneth Paltrow on holiday, Katy Perry’s new house and at least three pages were devoted to the “rockstar royals”, Princes William and Harry. Casual homophobia was everywhere, as usual. One article attributed declining viewing figures on soapie “Coronation Street” to “a raft of gay characters”. Ian Hyland, “Britain’s best TV critic”, signed off with a review of a new lesbian TV show: “So far we’ve met a girl from the Aussie outback (please don’t ask her if she’s missing the bush”. A “thighlights” package of their favourite Page 3 girls reminded readers that “the always tasteful Nudes of the World cheered up many a Sunday”.

Arguably the most egregious feature of the NOTW has been the leading role it has played in whipping up and sustaining the national obsession with paedophiles – or “perverts”, to use NOTW’s preferred terminology. Nothing says “Sunday” in the UK like the NOTW screaming about paedos, and here, too, they obliged yesterday. Sara Payne, mother of a girl murdered by a child molester in 2001, was trotted out to testify that the newspaper was a “force for good”. The paper reminded readers of its successful campaign for the introduction of Sarah’s Law, whereby families have to be informed if a sex offender moves into their neighbourhood.

Backslapping was the order of the day in other respects as well. “We’ve made you laugh, made you cry, made your jaw drop in amazement,” the editorial modestly reminded readers. And its impact didn’t stop at the writing, it was at pains to stress. “We’ve saved children from paedos & nailed 250 evil crooks,” one headline proclaimed. “It was as loved by its enormous army of readers as it was loathed by villains the length and breadth of Britain and overseas.” It would no doubt be churlish to point out the breathtaking hubris of the NOTW presenting itself as the moral compass of a nation. After all, this isn’t just a newspaper, as readers were repeatedly told. It’s an “institution”, it’s “part of the fabric of Britain”, it’s “as central to Sunday as a roast dinner”.

Brand experts have reportedly told the Murdochs that they would be “crazy” to contemplate launching the mooted replacement title, the Sun on Sunday, before the end of the year. NOTW readers may have to switch over to the rival tabloid, the Mail on Sunday, for sustenance in the interim: Similar character, but less celeb gossip, more hate and a paranoid focus on protecting the interests of the middle-class. By contrast, NOTW reminded us that it was “a paper for the working man and woman”.

When the Sun on Sunday does launch, it is likely to follow the formula for success that has seen both NOTW and the Sun thrive. Enough tits and arse to titillate, but not offend; frequent big-ticket exposés of sex scandals and corruption; “real-life” stories of heartache and inspiration and a lot of bigoted columnists.  All that remains to be seen is whether the British public will forgive News International for killing “the world’s greatest newspaper”. DM