The Tyler factor: A new confession that may finally bring down Lance Armstrong 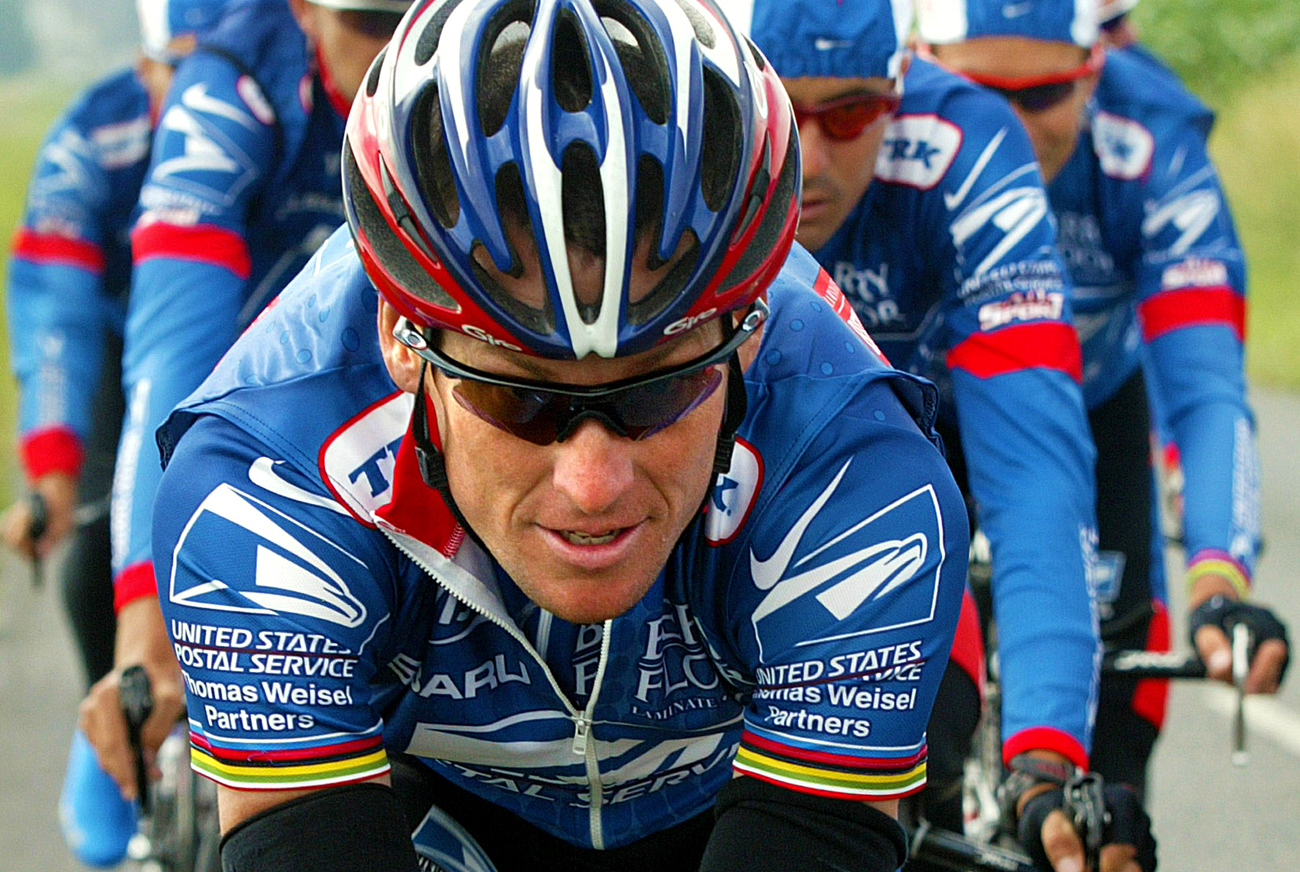 In 2002, Tyler Hamilton, once professional cycling’s heir apparent to Lance Armstrong, was on his way to a legendary career in his own right. He wasn’t merely tough, but was capable of feats of strength and bravery that were literally superhuman. That was a long time ago. On 20 May, he sent an open letter to friends and family warning them of a forthcoming appearance on CBS’s “60 Minutes” in which he finally admits to doping. And he seems determined to take Lance Armstrong down with him. By RICHARD POPLAK.

Over the course of the 2003 Tour de France, a rangy American cyclist named Tyler Hamilton embodied the word “valour”. That Tour was marred by, among other things, a mass crash on Stage 1, in which Hamilton went down hard, breaking his collarbone. Day after day, his shoulder taped up, Hamilton mounted his bike, his pallor a sickly grey, and rode up and down the mountains of France, culminating in a dazzling victory on Stage 16. He finished one minute and 55 seconds ahead of the field on that furiously hot afternoon. No one could quite believe it; there wasn’t a dry eye in all of France.

For those of us who followed Hamilton’s career, this was astonishing, but not out of character. He had ridden the Giro d’Italia with a broken scapula and had displayed both mental and physical toughness during his years on the American circuit that vaulted him into every fan’s “most loved” category. He was Armstrong without all the bravura, a quiet force of nature, who rode first and talked much, much later. When he won gold at the 2004 Athens Olympics in the individual time trial, a scant few begrudged him the victory.

Even if you don’t follow cycling obsessively, you probably know where this is going. Hamilton’s fall from grace was swift and precipitous. His Athens results were tainted by his A-sample testing positive for blood doping. He was swept up in the Spanish government’s Operacion Puerto doping dragnet, which busted cyclist after cyclist for a range of systematic doping programmes. By 2006, he was serving the first of two multiyear suspensions and was so utterly tainted that his earlier acts of heroism were shadowy memories from an alternate past.

Through it all, Hamilton maintained his innocence. Like his one-time teammate and sometime mentor, Lance Armstrong (he raced for US Postal from 1995 to 2001, while Armstrong was riding through his own terrible health problems), he started the Tyler Armstrong Foundation to help raise money for multiple sclerosis research and assist younger cyclists move up through the ranks. He kept a blog that remains a paragon of our current victim culture, a snivelling yet measured “why-me?” litany of the injustices he had to weather over the course of his career. Hamilton never, it seemed, quite got the seriousness of the allegations, or how to figure his own complicity into the equation. He was morally at sea.

Until now, that is.

In an open email to friends and family, sent on 20 May, Hamilton warned them he had recently come clean about being so dirty – on national television too. The salient question is, of course, why now? Why after all these years, is Hamilton issuing his mea culpa so long after his career has become a nasty footnote in the history of doping? “There are two reasons,” he writes. “The first has to do with the federal investigation into cycling. Last summer, I received a subpoena to testify before a grand jury. Until the moment I walked into the courtroom, I hadn’t told a soul. My testimony went on for six hours. For me, it was like the Hoover Dam breaking. I opened up; I told the whole truth, and nothing but the truth. And I felt a sense of relief I’d never felt before – all the secrets, all the weight I’d been carrying around for years suddenly lifted. I saw that, for me personally, this was the way forward.

“The second reason has to do with the sport I love. In order to truly reform, cycling needs to change, and change drastically, starting from the top. Now that I’m working as a coach, I see young people entering the sport with hopes of making it to the top. I believe that no one coming into the sport should have to face the difficult choices I had to make. And before the sport can move forward, it has to face the truth.”

There is a buried implication in that last statement, a bull’s eye placed on the jersey of cycling’s greatest figure, its Kaiser Soze, its Godfather. Last year, the disgraced 2006 Tour de France winner Floyd Landis, had similarly come clean after facing a grand jury. But he refused to go down alone. Also an Armstrong teammate early in his career, he swore he had seen Lance Armstrong doping and went to war with seven-time Tour winner and his vast entourage. A legendary photo of the then CSC team rider Tyler Hamilton of the USA, who fractured his collarbone in the first stage of the Tour de France, seen bandaged during the 197.5 km sixteenth stage of the race, which he won July 23, 2003. REUTERS/Vincent Kessler

Landis wanted the world to know that Armstrong was filthy, even though the stakes for Armstrong are much, much higher than they would be for your average professional cycling Joe. Because Armstrong was a director of US Postal, and then Discovery, if found guilty of doping it would represent felony fraud and he would be on trial for the sort of white-collar crime that has seen Conrad Black, Bernie Madoff and Raj Rajaratnam do serious San Quentin time.

The accusations swirling around Armstrong are that serious, and they are legion. So far, though, they are all circumstantial. In a recent Bicycling Magazine feature, Bill Strickland and his team break down the anecdotal evidence against the former champion, and it doesn’t look good. Nor is there a smoking gun. Lance Armstrong, in a hotel room, taunting a teammate with a syringe in his shoulder. Armstrong again, asking a young cyclist who walks in on him juicing, “Are you a man or a mouse?” Landis claims the official cycling body helped cover up a positive sample for Armstrong, which suggests complicity from the top. Or, the kind of unproven conspiracy theory that exasperates federal investigators and grand juries alike. Slowly, the snitches are snitching. But the problem is that the snitches are as filthy as the snitched-upon. So the case against Armstrong remains rickety.

Now, Tyler Hamilton has thrown his helmet into the ring. “[Armstrong] took what we all took…the majority of the peloton,” he tells “60 Minutes”. “There was EPO [eryhropoeitin, which stimulates red blood cell growth]…testosterone…a blood transfusion. I saw [EPO] in his refrigerator…I saw him inject it more than one time like we all did, like I did many, many times.” The frankness of this admission, and the fact that it will land on national television on Sunday night on a major news show, represents a serious threat for Armstrong, and it might be the beginning of the end.

“Tyler Hamilton just duped the CBS Evening News, ‘60 Minutes’ and Scott Pelley all in one fell swoop,” said his people in a statement. “Hamilton is actively seeking to make money by writing a book, and now he has completely changed the story he has always told before so that he could get himself on ‘60 Minutes’ and increase his chances with publishers. But greed and a hunger for publicity cannot change the facts: Lance Armstrong is the most tested athlete in the history of sports: He has passed nearly 500 tests over 20 years of competition.”

Landis, for his part, scoffs at that declaration. “Five hundred tests that come back negative are meaningless because the tests don’t work. All the negative tests in the world don’t hide the fact that there were positive tests that were covered up.” But Landis is a known cheat and a liar. As is Tyler Hamilton. Snakes everywhere, and the truth becomes more and more amorphous as investigators and fans alike try to decode the mess of cycling’s doping era.

It’s a long time since this fan watched Stage 16 of the 2003 Tour de France, but I can still recall the feeling—I witnessed an act of human bravery that was a testament to our collective spirit. What Hamilton did that day, juiced or not, remains for me a profound statement of what we are capable of. Through agony, we find glory. For cycling to win, Lance Armstrong must go down. It will be ugly, it will be bloody. And it starts, properly, this Sunday night. DM

Photo: Then four-time Tour de France winner Lance Armstrong of the US Postal Service team, in action during a training run near Paris, July 3, 2003. The 100th Tour de France starts here July 5, 2003 ending back in Paris on July 27, 2003 after winding its way arround France for 3,350 kms. REUTERS/Eric Gaillard