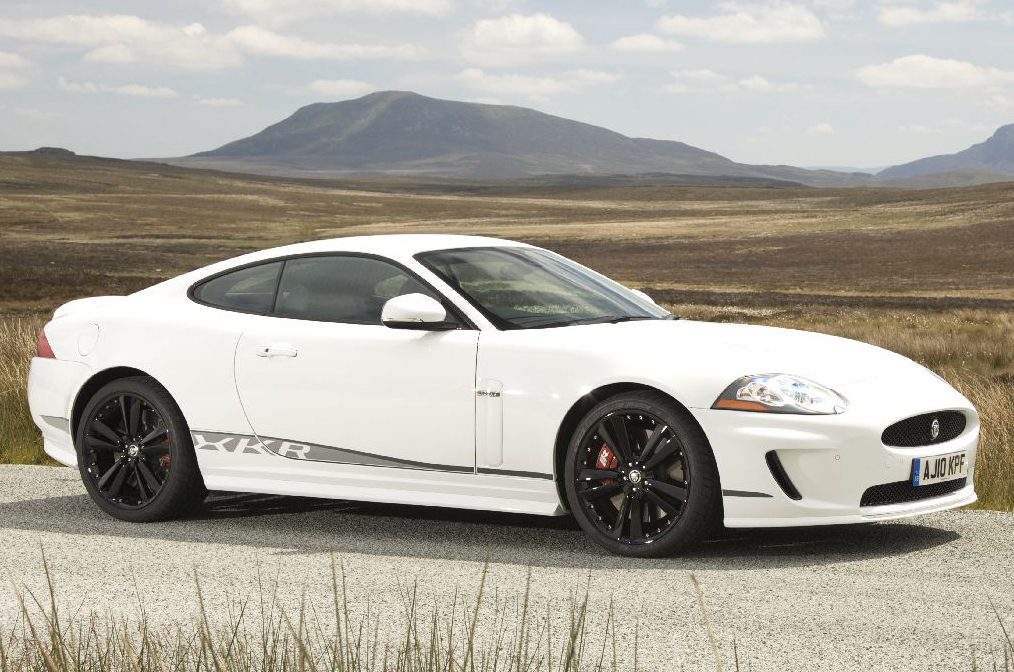 In standard trim, the Jaguar XK-R is an aristocratic sports car that combines quintessential British design with enough muscle to add an unexpected, but no less enjoyable, hooligan streak. That the XK-R Black Pack looks a lot meaner and more aggressive, suggests it should be even faster and even wilder. But don’t judge a book by its cover. By DEON SCHOEMAN.

Meet the XK-R Black Pack, a British sports coupé that is to Jaguar’s already aggressive XK-R what Superman is to Clark Kent. Well, sort of.

So then, what makes the Black Pack version different? Does it have a bigger engine? A racier gearbox? More power and torque?

The answer to all of those questions is … absolutely not! Instead, the differences between the extrovert, head-turning Black Pack and the sleeker, slimmer standard model are all cosmetic. The most obvious, most eye-catching elements of the package are those massive 20-inch rims, finished in glossy black, and shod with sticky, fat, low-profile Dunlop rubber.

But there’s more. The Black Pack also includes a full body kit that combines a deeper front airdam and splitter with extended sills and a larger, more acutely angled rear spoiler. The hungry air intakes get the black glossy treatment too, which adds further aggression.

The styling kit and the wheels not only add a pugnacious pose to the XK-R’s presence, but also make the two-door look more hunkered down. No wonder, it looks significantly faster than the standard model. And therein lies the rub: the Black Pack’s menacing mien creates an expectation which, in pure technical terms, the car is unable to live up to – at least not in absolute performance terms. But experientially, this XK-R does somehow feel racier and more reckless.

The driving experience starts with a cabin that’s still firmly rooted in the best bespoke traditions of the British sports car art. There’s soft, hand-stitched hide in abundance, while the trim includes glossy, dark wood inserts. The result is an overriding aura of craftsmanship, but not at the expense of modern conveniences.

Both front seats offer full electric adjustment, including for lumbar and lateral support, ensuring that even the most fastidious driver will be able to dial in the perfect, and perfectly comfortable, driving position. The attention to detail is impressive: The seat controls are tactile and intuitive, so tweaking the settings on the move is easily accomplished.

The standard equipment list is a long and comprehensive one and embraces almost everything the heart desires.

A system common to top-end Jaguar and Land Rover products is the touch-screen display-based control system: a kind of command centre where a host of settings and systems can be accessed and adjusted to match personal preference. It’s one of the best interfaces in the business.

The audio system, complete with Bowers and Wilkins speakers, is any music lover’s dream and envelops the Jaguar’s occupants in rich and glorious sound.

Less impressive is the rear seating: It’s supposed to qualify the XK-R as a two-door coupé, but accessing  the two indentations masquerading as seats requires the skills of a contortionist.

If, by some miracle, you manage to wedge yourself into that tiny space, the almost complete lack of legroom will turn even a short journey into agonising hell. As a result, those rear seats are little more than extra parcel shelves. At least the boot is generous enough to swallow ample luggage for two.

While the exterior and interior of the Black Pack are a departure from the XK-R norm, the contents of the engine bay are all too familiar. In fact, the five-litre supercharged V8 under the lightweight bonnet is identical to the unit powering the standard XK-R. That’s not necessarily a bad thing – after all, 375kW and 625Nm are nothing to be scoffed at. And it’s a lot of urge and twist for a two-plus-two coupé. The Jag’s 1,8-ton kerb mass means that the Black Pack has an impressive power-to-weight ratio of 208kW /ton.

However, even those stats don’t really match the in-your-face image of the XK-R Black Pack. And while the maximum output is generous enough, it seems a pity there isn’t at least something that’s different: A bit of extra power, a slightly different gear ratio set or even a stiffer or adaptive suspension.

The gearbox has also remained unchanged. The ZF-sourced six-speed automatic is a conventional design, but its cog swaps are slick and quick and it easily copes with all that performance potential.

The XK-R feels quite different to any other sports car with a similar power-to-weight ratio. It’s happy enough to trundle along with the engine barely ticking over, or tackle long-distances with effortless composure.

But select Dynamic mode, with the DSC stability control now partly disabled, and the Black Pack suddenly feels every inch the edgy, truant, delinquent muscle car part. Give it too much stick too early, and you’ll feel the tail begging to step out. And in straight-line terms, the acceleration is astounding. The factory specs quote a zero to 100km/h sprint time of 4,8 seconds, but the hands-on experience always faster, and more concentrated, than those figures suggest. Top speed is limited to 250km/h, but it’s obvious that, if unfettered by such electronic watchdogs, the Jag would easily reach 280km/h or more.

Even driven with only mild enthusiasm, the XK-R feels edgy and impatient. It takes some practice to get throttle input just right, but the big brakes have plenty of bite and the steering is quick enough to catch that wayward rear with relative ease.

The Black Pack shares all of these traits with the standard XK-R, but somehow, this coupé’s dynamics feel more acute, more concentrated. Just imagine what it would be like if it did have a bit of extra muscle at its disposal – especially since the Black Pack treatment creates such high performance expectations. So, as distinctive cars go, the Black Pack coupé certainly looks the hard-core part. But frankly, we’d stick with the normal version of the XK-R, because it offers much the same for less.

However,  Jaguar has an ace up its sleeve: At the recent Geneva Motor Show, it unveiled the XK-S – a car that not only makes a visual promise, but actually backs it up with gains in power and torque. If our local fuel is deemed good enough, the ‘S’ may well become the ultimate XK to own. DM