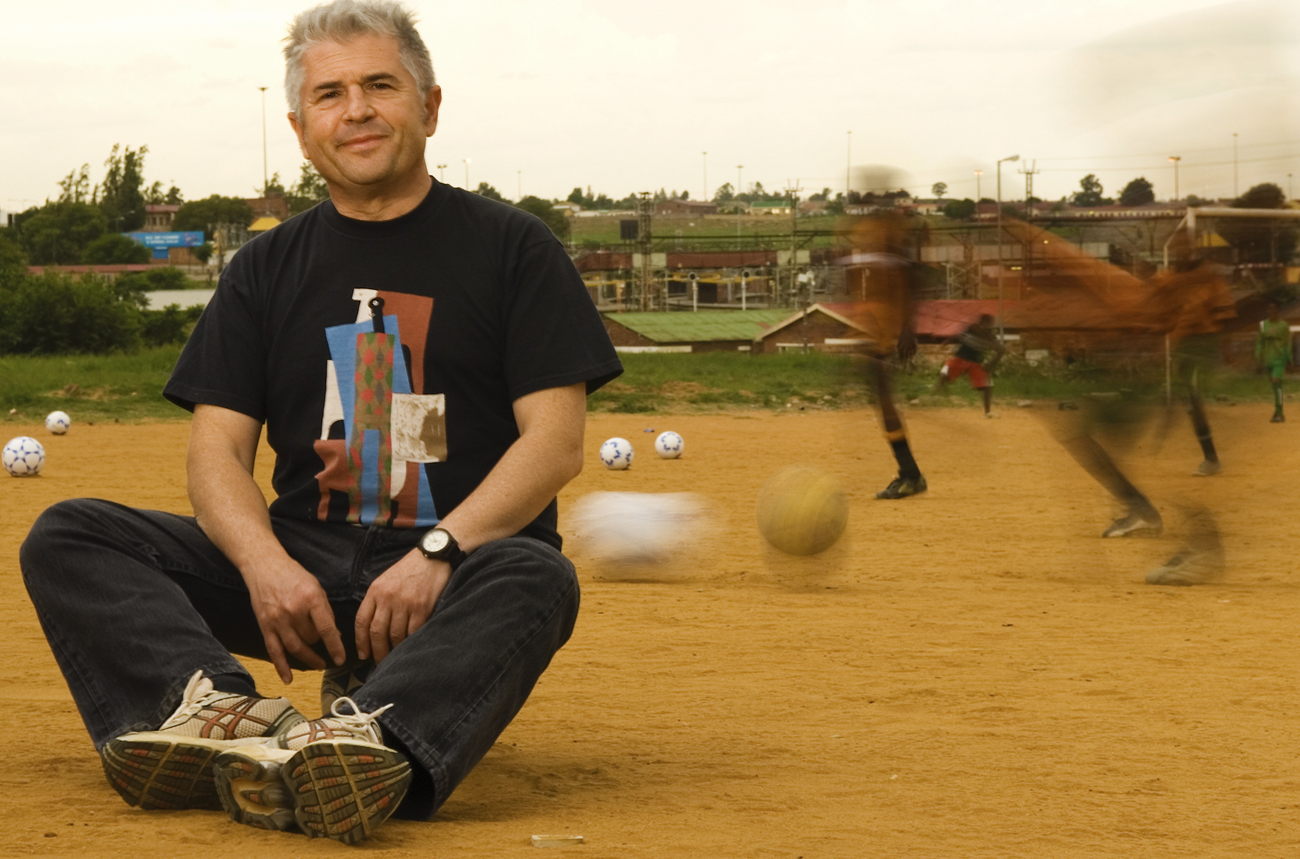 When John Perlman was presenter of the AM Live show on SAfm, it was one of the most hard-hitting and influential radio programmes in the country. His famous run-in with the broadcaster’s politburo left him weary of political games, so he founded an NGO. Now the one-time cynic is a full-time believer.

Around the time of the 2006 World Cup in Germany, veteran journalist John Perlman started to think about where he’d be and what he’d be doing when the 2010 World Cup arrived in South Africa. A lifelong football enthusiast, he knew his profession would give him the opportunity to get close to the players and the intrigue – but he was wary of coming at the tournament from the position of the cynic. He wanted to do something that had “social benefit” (a tough thing for a journalist to acknowledge, but there you have it), and he followed his instincts. By October 2007 Perlman had officially launched the Dreamfields Project, a section 21 company that places “resources for playing soccer” in South Africa’s townships and rural areas.

“This is all a bit of a revelation for me,” Perlman says, during an interview at the Dreamfields offices in Diagonal Street. “There’s a lot around the World Cup that you can get pissed off and sceptical about. I value scepticism, I think it’s important, but I just didn’t want that attitude with this World Cup.” Photo: Celebrating the launch of a new field at Hluvukani, Mpumalanga. Daniel Born

Also, he adds, he was “weary of politics” after what had happened at the SABC in 2006. Perlman, most readers will recall, was the key man in a whistle-blowing incident involving the existence of an editorial blacklist at the broadcaster – he contradicted SABC spokesman Kaizer Kganyago’s on-air denial that the organisation was engaged in political censorship, and although he was vindicated in an internal report, he resigned from his job as presenter of AM Live in January 2007.

He started working full-time at Dreamfields in March 2007, and was paying salaries to a staff by July. The founding capital for the NGO came from Old Mutual and BHP Billiton, who both, according to Perlman, “behaved in a very un-corporate fashion”. What he means by that is they allowed other brands to associate themselves with the project, and so far Dreamfields has partnered with around 40 companies of JSE-listed size, 100 small businesses, and 10 government departments. The Development Bank of Southern Africa has also been a major contributor, with donations of around R6 million.

The Dreamfields mandate is purposely simple; Perlman doesn’t believe in complicating the task with objectives that may or may not be achieved. So he and his team deliver football kits called DreamBags – containing soccer boots, full uniforms, shin guards, soccer balls, coaches’ shirts, and other gear – to schools across the country. The NGO also works to improve the state of soccer pitches in South Africa’s townships and rural areas, and stages a series of DreamEvents – tournaments or matches that celebrate the spirit of the game. As for successes, Perlman points out that Dreamfields has so far invested R20 million in the sport in communities across the country. Over 1,400 teams have been supplied with DreamBags (each bag equips 15 players); 12 soccer fields have been upgraded, three of which have been grassed; and 104 football events have been organised.

At least 60 of the larger events organised by Dreamfields have come with investments of R40,000 or more, resulting in a total of R2,4 million that’s been funnelled into the South African small business sector. “That money goes to caterers, the welders who make the goalposts, the events organisers, and the guy who brings in the sound system,” says Perlman. “And a lot of it is repeat business.”

In the medium term, Perlman’s aim is to make Dreamfields a resource for the creation of nationwide school soccer leagues. “If it’s not a regular, self-propelled activity, then we haven’t succeeded,” he says. The other objective is to conceive and implement an intensified plan for the upgrade of fields across South Africa, which involves levelling the tracks, building proper goalposts, and bringing in suitable soil. The Dreamfields vision is not, Perlman emphasises, to establish a talent-feeding scheme for Bafana Bafana. “This should ultimately help our national team, but it’s not the goal. We just want young people to have fun and enjoy themselves. If people asked me, ‘Are you looking for the next Lucas Radebe?’ I say, ‘Ja, but we’re also looking for the next Pius Langa or Mamphela Ramphele.’”

At the end of the interview, Perlman feels the need to say, once more, that he’s been having the time of his life. “The most amazing part of my day is to watch the transformation of the kids from when they arrive to after they’ve put on their kit. You have to be a bit misty-eyed to do this thing every week.”