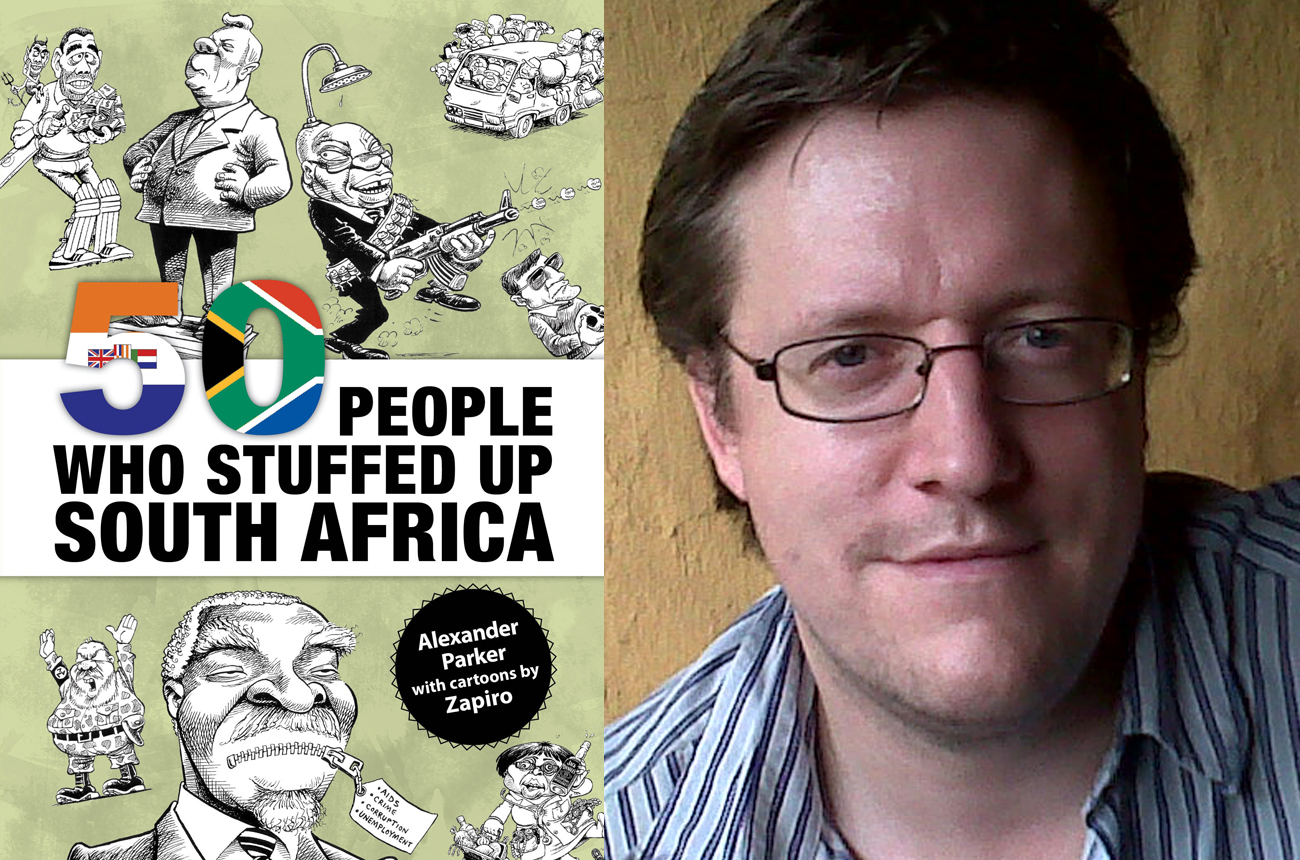 What do DF Malan, Kevin Pietersen, and Jackie Selebi have in common? They all feature in Alexander Parker's latest book, “50 People Who Stuffed Up South Africa”. And yes, in case you're wondering, Thabo Mbeki and JZ are in there too. By THERESA MALLINSON.

Parker is candid when it comes to admitting how he came up with the concept for his book. “A guy in Britain (Daily Mail columnist Quentin Letts) wrote a book called ‘50 People Who Buggered Britain’,” he says. “I liked the idea more than I liked his book. I thought his book felt a bit sort of bitter and not as edifying as it could have been. I felt South Africa was crying out for a book like this.”

Parker’s take on Letts’ book is that he was “really having a go at people who were still alive”, but his own book takes a different approach. “You can’t write about any of the current politicians without context, and of course, the context is apartheid. Where did it come about? Where did nationalism come from? Then you start talking about the Boers, and British colonialism, and all of a sudden you’re back in 1652.” Parker’s selection of people to profile runs the gamut of South African history, from Jan van Riebeeck, who lived from 1609 to 1677, to Khanyi Mbau, born in 1985 and still very much alive.

A lot of debate went into choosing the nasties that made it into the final 50. “When  we first got into that process I realised how much fun it was going to be,” says Parker. “I think a lot of people wrote their own entry into this book. There was no doubt that there would be people like Verwoerd and that lot. What I found interesting was, with the ANC people, it was quite difficult, because the context is so different. You’re talking about Manto (Tshabalala-Msimang), and there’s no way she couldn’t go into the book because of the damage she caused, but there’s so much she sacrificed, which is why I tried to pull my punches a bit with some of those guys.”

Despite its subject matter, “50 People Who Stuffed Up South Africa” is just as much fun to read as it must have been to write – largely because of Parker’s pithy and often humorous style. In the brief descriptions that start off each chapter, Sepp Blatter is the “modern coloniser of South Africa”, PW Botha is the “Rubicon non-crosser”, and Schabir Shaik is a “medical miracle”. Of course, a huge part of the fun is coming up with your own list of people you think should’ve been included. How about Ivy Matsepe-Casaburri (who stymied economic development by strangling the communications industry), Clive Derby-Lewis (one of Chris Hani’s killers), or Kader Asmal (remember outcomes-based education?).

Parker says there seems to be a general consensus that the list is about right. One person that he has taken a lot of flak for excluding is Winnie Madikizela-Mandela. “My publisher and I had a fairly long debate about Winnie Mandela, and I eventually put my foot down and said: ‘I can’t; I’m not going to put her in’.” says Parker. “Everyone knows about Winnie’s crimes, but she gave up too much and suffered so much. South African stuffed her up, not the other way around.”

On the surface, Parker’s book can be pigeonholed as a classic Christmas-stocking filler, but, owing to the historical depth and breadth of the stuffer-uppers he included, it’s much more than that. In fact, if you’re not well-read in South African history, it could certainly serve as a decent primer. “I thought I was going to write more of a polemic,” Parker says. “(But) I ended up really feeling it was important I wrote about (Lord) Carnarvon and (Lord) Kitchener and (Bartle) Frere. Most South Africans haven’t heard of those guys, because of the historically poor nature of history teaching in South Africa. They played a huge role; they’re why Zululand is like it is now, why South Africa is even a country – it always goes back to that era.”

The sketches of British colonialists, apartheid villains, and corrupt post-1994 politicians is deftly balanced with the inclusion of some not-so-serious baddies: Randall Abrahams, Khanyi Mbau, and “that guy I sat next to at the polo”, among others. “I had a lot of fun writing about taxi drivers and Julius Malema and Steve Hofmeyr, the base idiots of our society,” Parker says. “Malema and Hofmeyr are the same person really.”

Although the concept of “50 People Who Stuffed Up South Africa” is an inherently depressing one, Parker’s lightness of touch means one ends up laughing more often than crying at the cast of characters that people his book. This is, of course, greatly added to by the cartoon portraits that accompany the majority of entries – by none other than Jonathan Shapiro. “My publisher and I were discussing the fact that we wanted to get it illustrated (and) we just sent Zapiro an email. To our delight he said ‘yes’, and he actually became really involved,” Parker says.

Parker didn’t want his book to be a bitter one, and he deftly pre-empts criticism of his book by the good news brigade with his heartfelt introduction. “I can’t say that I agree with the premise (of the title),” he writes. “It’s just that 50 People Who Tried Their Damndest To Stuff Up South Africa But Couldn’t Quite Manage It In The End isn’t as catchy, is it? So, while the various characters featuring on these pages may have done their best to stuff up this fine land in which we live, I must declare their collective failure. It’s why I choose to live here. I love the place.”

We’re not quite sure if any of the living people included in the book will love Parker if they ever get around to reading it. So far, he hasn’t received a response from any of them, but jokes: “I’m waiting to hear from Steve Hofmeyr”. Truth is, Steve’s probably too busy writing angry letters to his friend Julius to bother with the likes of Parker. But wouldn’t it make a great Christmas present for both of them? DM

The “50 People Who Stuffed Up South Africa” (in alphabetical order)