Evly: SA’s own crowdsourcing and social networking mash up 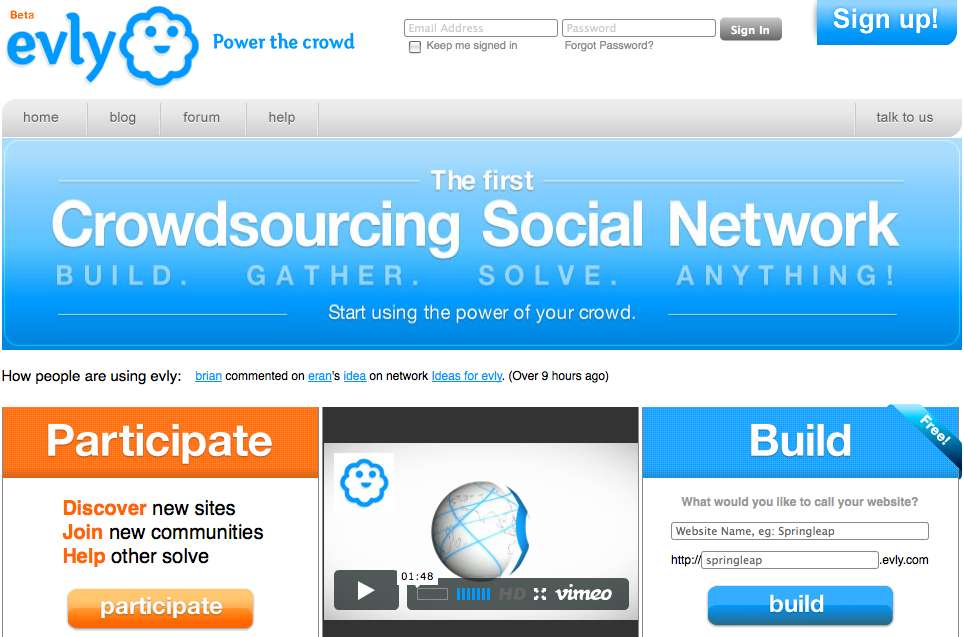 South Africa's local-to-global crowdsourcing contender, Evly, has just gone live. Only time will tell if it will be successful, but it has certainly unleashed hope that this country can produce a top contender in the social networking stakes. By MANDY DE WAAL.

Silicon Valley has devoured global media interest with a host of social networking platforms that have captured the world’s attention, with the likes of Twitter and Facebook taking over Web 1.0’s media darlings eBay and Amazon. But the tide is turning, as evidenced by Ushahidi’s edging into the global consciousness and with Wall Street eyeing players tucked away from the Western headlines like Naspers’ Tencent. With interest turning to Africa, isn’t it about time South Africa had a major digital success story and will Evly be the crowdsourcing start-up that could? Evly’s Eran Eyal is bullish enough to think so.

Touted as the place where people can create a crowdsourcing venture in just seven clicks, Evly’s all about launching new products, solving problems, doing market research and finding funding from the crowd. “Evly is the world’s first crowdsourcing social network,” says Eyal. “What we are doing could revolutionise the Internet.” Eyal draws on a mathematical model used for calculating returns for businesses with viral loops and says a high-road scenario could see Evly gain massive traction by achieving 36 million users in its first 18 months. If thoughts rush to images of servers falling over, Evly’s been built in the cloud, which Eyal says ideally should expand and contract to accommodate scale.

“We have very robust platforms and some of Microsoft’s team were recently out here to study us. The tricky part is that the cloud should expand and contract with the growth in users, but Evly is so new and the technology we’re using is so new it’s a bit of a gamble. It is literally cutting-edge innovation.” Eyal and his partner Eric Edelstein have close on three years’ experience on crowdsourcing start-up Springleap, which is a local success story, albeit on a smaller and less ambitious scale. “We wanted to know what it would be like to build a crowdsourced business that would make money from day one.”

Eyal says Springleap is profitable, but won’t reveal figures – only to say that revenues are good with sales from BigBlue, African Trading Port, SKA, GlobalGirl and a range of local independents. Springleap also supplies The Tigers Eye which is a Tourvest company focused on the travel market, and the crowdsourcing company is making good inroads into offshore markets. “We have 3,500 artists who form a part of our community of 25,000 subscribers,” says Eyal.

That’s a long way from 36 million, which will require some solid investment for infrastructure and scale. Evly’s invested in by Eyal and Edelstein, as well as YDE’s Paul Simon, who also put money into Springleap which seeded Evly. “We received R4 million from Lord Duncan Barratt to get the beta version of Evly built. Now we’re looking for our next round of funding,” Eyal says.

At the time of making the investment late last year Barratt likened the local crowdsource business to Twitter, Facebook and Ning. The big issue, of course, is the Jerry Macguire incantation: “Show me the money!” Loads of digital businesses have achieved user traction, but few have been able to convert those numbers into cash.

Watch an introduction to Evly:

Ning is the brainchild of Marc Andreessen (and the lesser known Gina Bianchini) and was launched with “angel funding”. After this came investors with the big cheque books which saw Ning get two rounds of venture capital totalling more than $100 million. At the time Ning was valued at $2 billion.

Like Eyal, the management of Ning is mum on profits and turnover, although Business Insider worked out last year that Ning was turning a $10 million annual income. Now, if only they could work out Ning’s expenses.

Evly’s big benefit, of course, will be foreign exchange. The site will be charging for services in dollars, but the development and management of the platform will take place in South Africa.

From a user perspective what’s unique about Evly is that it allows multiple personas and mashes crowdsourcing with social networking. Users can register a business persona, create a different account to seek seed capital for a start-up on the side, petition the crowd on political issues or source talent for work on a favourite charity. While they do all of this, they can communicate with the crowd à la Facebook.

But don’t expect bells and whistles just yet. Eyal says Evly is an early-stage beta product. “We could have waited six months to release something more robust, but then there’s the thought that if you’re not embarrassed by the product at launch, you’ve launched too late. It’s crucial to get traction and customer feedback, to build a better product and keep on moving.”

Some of the first insights Evly should take on board come from Web researcher and author Arthur Goldstuck, who registered with Evly pre-launch. “There is nothing to prevent a clever crowdsourcing strategy from achieving global scale. However, it is hard to tell how successful Evly will be because they still haven’t shown their faith yet. They’re talking hard, but not showing a lot,” says Goldstuck.

“The Evly user community should have been instantly informed of their launch, so I am a bit concerned about their go-to-market strategy, which continually befuddles me. There have been a few pre-launch announcements and each drove people to the platform to register. When you have that sort of build-up you have an obligation to inform all your stakeholders the minute your platform is ready for them,” says Goldstuck, who as a user has yet to receive an email from Evly on the launch.

Goldstuck says Evly is a fantastic platform for building a crowdsourcing environment, but adds that the operation may need to hold people’s hand and guide them into the model. “The misconception that people might have after the Evly launch is that all you have to do is click a few buttons and you can crowdsource. It is not as simple as that. You still have to understand what you want to achieve and take a strategic approach. Evly may find that they have to guide people into the process and that their business growth will require a little more customer intervention.”

And what about the money? Evly will initially monetise by running ad words and through internal user-generated advertising similar to Facebook. Users will get to enjoy basic services for free, but premium services like the hosting of unique domain names and owning the data generated by your Evly initiative will cost, as will other premium services. In the long term Evly will offer white-label platforms and will get revenues from licensing the crowdsourcing software to big corporate clients or brands that want a stand-alone crowd site.

It is obvious that Eyal and Edelstein have a way to go before Columbia Pictures makes a movie about them, but it would be pretty great for South Africa if that happens. DM

Read more: Crowdsourcing and open source: knowledge is a gift in The Telegraph,  Ed Norton’s Innovative New Charity Site – Crowdrise, Johnny Cash and the future of crowdsourced videos in the Guardian, Project Activate – Ushahidi comes to town in the Guardian, and Crowd-sourcing your investment portfolio with Quovo in Fortune.