Commonwealth Games: It's not party time for the Indians...

Commonwealth Games: It’s not party time for the Indians either 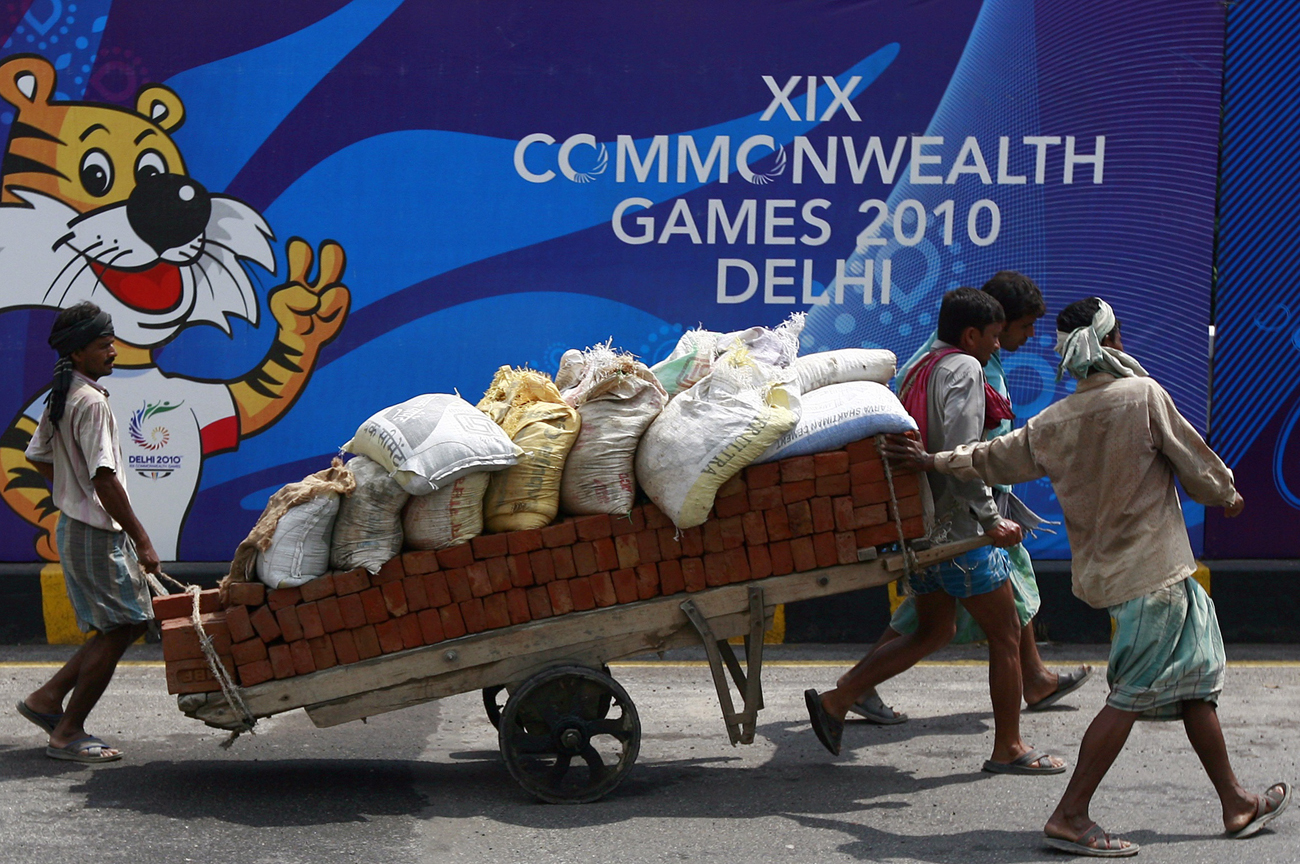 The city you live in is hugely inconvenienced by construction works. Every day new instances of mismanagement and corruption around the hosting of a major sporting event come to light. The international press rips into the lack of preparation, and taxpayers are pissed off that their money is being used to fund such a fiasco. Sound familiar? No, we’re not writing a reprise of the 2010 World Cup, but focusing on the upcoming Commonwealth Games. Once again, the politicians have a lot to answer for. VRINDA MAHESHWARI reports from Delhi.

Residents of Delhi are not at all happy with their city’s dismal performance in preparing for the Commonwealth Games, and far from charmed with the negative publicity it’s attracted. Tuesday’s collapse of a footbridge near the Jawaharlal Nehru Stadium, one of the main venues of the Commonwealth Games, brought more criticism, with the safety of the buildings being questioned. The city had barely recovered from the accident, which left some 23 labourers injured, when ceiling tiles started falling in one of the venues.

Now Delhi’s chief minister, Sheila Dikshit, is trying to save face. In a recent statement, she said that the Organising Committee was facing problems and setbacks, but that everything was, by-and-large, under control. Calling all the alarming incidents that occurred “minor glitches and hitches”, she went on to state that some problems are present before every event and that these, too, are surmountable. We don’t disagree, but some specific facts and figures about the Delhi games in particular, rather than vague generalisations, might have been more to the point.

Dikshit has asked the city to remain positive, maintain the “national pride” that is involved with the event, and to support the effort that is being put into the hosting of the Games. Various officials involved in the organisation of the Games have in fact gone to the media multiple times, exhorting the public to be enthusiastic. Radio stations are joining the fray as well, with several campaigns being launched to retain some semblance of public support.

But are the residents of Delhi – and in fact, Indians all over – ready to roll over and play nice? Are they willing to forgive the administration and bear the brunt of badmouthing they are now receiving from the international press? By the looks of it, definitely not.

A recent poll by a leading national daily, Times of India, found that 76% of Delhi residents felt that the $3 billion cost of the Games – many times the original estimate – was completely unjustified. About half the people polled felt that the preparation for the Games had disrupted their lives in a major way. Photo: A crane removes waste from a collapsed pedestrian bridge outside the Jawaharlal Nehru Stadium in New Delhi September 22, 2010. A footbridge being built for the Commonwealth Games in India collapsed on Tuesday, injuring 27 people and highlighting the raft of problems that have so far blighted the event, meant to showcase an emerging global power. REUTERS/Andrew Caballero-Reynolds.

A survey by another leading national daily, The Hindustan Times (in association with market research organisation Cfore) is equally damning. An overwhelming 68% of Delhiites felt that the Games made them feel ashamed (compared to 17% who felt indifferent, and a mere 15% who felt proud). A resounding 66% felt that the Organising Committee was chiefly responsible for the mess; and depressingly enough, less than half the people interviewed said they would actually watch the Games.

This is a pretty poor report card for the nation’s chief sporting foray since the 1982 Asian Games. And it’s not only the newspapers that are carrying such reports. Callers on radio shows are disappointed and angry as well, and the reluctance of foreign sportspeople to participate in the Games is adding to the discontent. Many residents are planning on leaving the city while the Games are happening, since most schools and businesses are on holiday. In fact, “Commonwealth Escape Packages” are being offered by a number of tour operators and are selling like tickets to the men’s 100m final would be if Usain Bolt hadn’t withdrawn.

The political repercussions of the mismanagement are slowly being felt. With allegations of corruption and the widespread furore over Delhi’s lack of preparation for the games, the head honchos are having to face the music. Among them is Organising Committee chairman Suresh Kalmadi, who is being given the cold shoulder by the Congress. Kalmadi represents the national behemoth party as a member of the Lok Sabha (the House of Representatives). Interestingly enough, the political party seems readier to forgive the other party members who have been involved in the games, including Delhi chief minister Sheila Dikshit, and union ministers MS Gill and S Jaipal Reddy.

The party has been quick to distance itself from Kalmadi, saying that he will have to reply personally to any charges levelled against him. Congress spokesperson Shakeel Ahmed made this crystal clear, stating that: “Suresh Kalmadi is… not a Congress representative but the Chairman of the Indian Olympic Association.” Curiously enough, the integrity of the two union ministers and of the chief minister was said to be unimpeachable.

The delays in construction of buildings for the Games, caused partially by the unexpectedly prolonged monsoons, as well as the outbreak of diseases such as dengue fever in the city, has put the residents of Delhi in a foul temper indeed. They’re in no mood to listen to the excuses being put forth by Games management and the government.

For now, investigations into the corruption and mismanagement charges have been put on hold, as the actual organisation of the Games has been given the priority. The public is just waiting for the event to be over; come 15 October, they will be baying for the blood of the people who have misused public funds to such an extent. The Organising Committee had better watch out. DM

Main photo: Labourers pull a hand cart loaded with bricks and sacks of sand in front of boards advertising the Commonwealth Games in New Delhi September 23, 2010. More nations delayed their teams’ arrivals for the Commonwealth Games as organisers raced against time to address security and health concerns that have already led several top athletes to pull out. REUTERS/Andrew Caballero-Reynolds