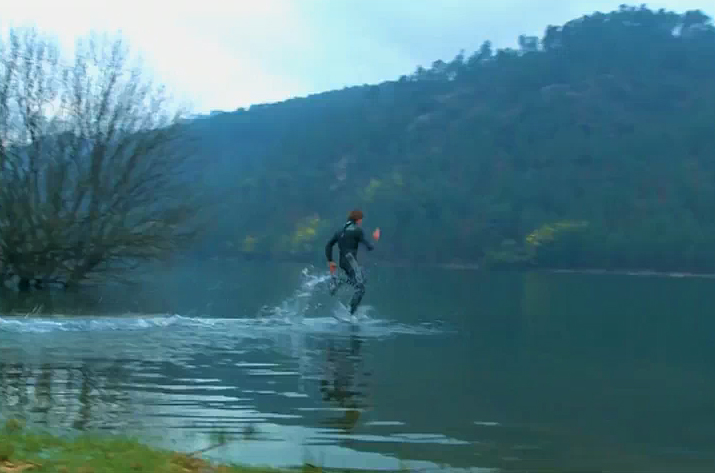 All the cool kids in Europe are taking up liquid mountaineering (that’s walking on water if you’re unfamiliar with the craze). There’s only one snag to attaining prophet-like superpowers: it seems you’ll need a pair of Hi-Tec shoes first.

Over the last month or so, more than four million people have been introduced to the world’s latest extreme sport through a video spreading virally via YouTube. The documentary-style clip features a bunch of guys in Gerês, Portugal, who have developed “liquid mountaineering” – walking (or running) on water. The first guy interviewed is “Sebastian Vanderwerf” – who talks with a distinctly South African accent – and claims that the idea is “Ulf’s brainchild”, Ulf being one of his Jesus-like mates. The video then goes on to show early attempts and how the aquatic mountaineers get progressively better at their art, achieving eight to 12 steps on water before plunging in. ‘

As described on the discipline’s website: “Liquid Mountaineering is a new sport which is attempting to achieve what man has tried to do for centuries: walk on water. Or to be more precise: running on water. We are developing the sport from scratch. By accident we found out that the right water repellant equipment you can run across bodies of water, just like a stone skimming the surface. It’s a difficult technique, involving the right water conditions, making use of the surface tension, speed and angle. It’s hard work to make even a few steps, but once you get the hang of it, you actually do get some distance!”

The video is just plausible enough that some people fell for it hook, line and (excuse the pun) sinker. But the phrase “the right water repellant equipment” was the first clue that this could well be an undercover marketing campaign. In the video, the guys mention discovering these 100% water-repellant shoes “by mistake”, a serendipity that helps them achieve their miraculous feat. If you look closely in the video you will also notice the subtle Hi-Tec branding on their clothing (T-shirts, caps and pullovers). However, the brand or model of shoe is never mentioned.

Initially, Hi-Tec came over all coy about its speculated involvement in the project. On May 17, Hi-Tec UK released a statement on the phenomenon. “We have recently been made aware of a viral film which is sweeping the internet worldwide, under the name Liquid Mountaineering. After some investigation we have found out that Hi-Tec Poland was contacted by these guys and has supplied a few pairs of shoes and some apparel as ‘sponsorship’ for their crazy new sport.” Not exactly an outright denial that the company was behind the campaign. According to an article on Clickz.com, Hi-Tec’s US PR manager Dayna Panales stated: “We had zero to do with that. Nothing. This is not a campaign on our part at all.” A plausible denial? Perhaps the folks in the US simply didn’t know what the European division was up to.

However, on Monday Hi-Tec finally admitted that it was behind the liquid mountaineering video. Really? We didn’t have a clue…

Watch: The Making of The Liquid Mountaineering video

Simon Bonham, the group head of marketing at Hi-Tec explains the reasoning behind the campaign.  “The idea was to take a traditional form of marketing and totally turn it on its head, in the process capturing the fun, spirited side of our brand.” To do so, Hi-Tec called in Amsterdam agency CCCP, with a brief to “make Hi-Tec famous”.

And CCCP rose to the challenge. As Bonham says: “The reaction to the viral has surpassed all expectations; with people all over the world debating whether this could indeed be possible or not and even trying to do their own Liquid Mountaineering. We’ve even seen a number of entertaining attempts appear on YouTube.”

For an undercover advertising campaign, Hi-Tec and CCCP certainly went to a lot of effort. While the video was posted on YouTube only on 28 April, the first post on the Liquid Mountaineering blog was on 15 November 2009, and the Facebook page was also set up last year. It’s the care that’s gone into developing the back story that made the campaign work. Because, despite being Hi-Tec’s baby, liquid mountaineering genuinely appears to be less about the gear one uses, and more about the personal experience.

“To run over water is not comparable to anything you are familiar with, like ice or any other surface for that matter. It feels more like running on an invisible carpet that could tear at any moment. When you do actually make a perfect run is just an awesome feeling. We are still pioneering the sport and the techniques to run across water, but we’re pretty sure it could be the next big thing. We’re truly lucky to live in this historic time when technology and human skill come together to make the impossible possible,” states Ulf in his first blog post.

And, believe it or not, people have started subscribing to Ulf’s philosophy in real life.Ed Mancebo and Richard C founded the Seattle Liquid Mountaineering Club in Seattle, and filmed their own attempt at walking on water. At the end of the video the pair sum up what they’ve achieved.  “Have we taken a step on water? No. Have we taken a step in the right direction? Yes,” they state.

Sure, Liquid Mountaineering may have begun life as a make-believe idea. But its success makes it as real as a viral campaign gets.