05 May: BP’s hopes hinge on containment domes to cap... 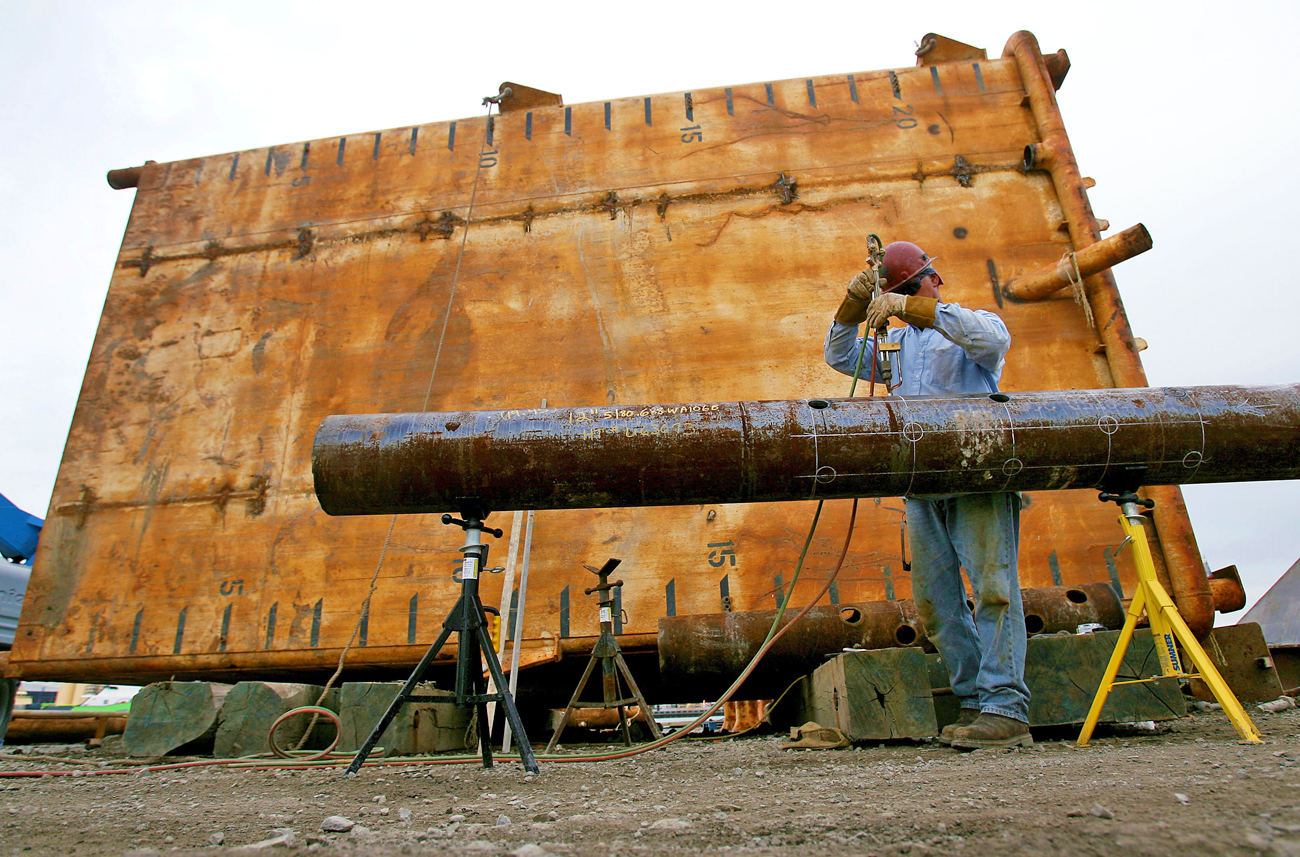 The quickest resolution to BP’s woes over the sunken Gulf of Mexico oil rig that’s gushing some 800,000 litres of oil a day into surrounding waters hinges on capping the leak. That’s what a number of 100-ton metal and concrete lids being built by US company Wild Well Control are meant to do, enabling the pollution to be sucked up into tankers on the surface. Hopefully they’ll protect fisheries, wildlife sanctuaries, oyster beds, beaches and wetlands along the coasts of Louisiana, Mississippi and farther east along the Florida Panhandle. But the containment domes are an untested solution in water 1,500m deep. If capping the leak doesn’t work, BP’s only solution will be a relief well that could take up to three months to drill. The oil major has already said it will pay for all “legitimate” clean-up costs, but blames US-based rig owner Transocean for the leak, saying faulty equipment led to the catastrophe.

Photo: Welder Marshall Banks cuts a pipe on a second BP Pollution Containment Chamber at Wild Well Control, Inc. in Port Fourchon, Louisiana May 3, 2010. The system is made up of a 125-ton structure that will be set on top of the largest leak source. This leak is located at the end of the riser, about 600 feet from the wellhead. Energy giant BP Plc, its reputation battered by a catastrophic oil spill threatening the U.S. Gulf shore, said on Monday it was working to stem the gushing undersea leak and promised to pay for the cleanup and compensation claims. BP is working on to try to seal the ruptured well with the undersea containment system that would capture the leaking oil and channel it to a tanker on the surface. REUTERS/Sean Gardner

California’s governor Arnold Schwarzenegger has withdrawn support for a plan to allow new offshore drilling for oil off Santa Barbara County. The Hollywood hero had earlier championed the cause, drawing the ire of environmental groups and praise from those who say the state needs oil for jobs and revenue. As a Republican, Schwarzenegger has followed the lead of former President George W Bush in seeking to make the US independent as far as possible of foreign oil (an idea recently and controversially backed by Democratic President Barack Obama). But in citing the disastrous BP spill in the Gulf of Mexico, Schwarzenegger now says that images from the Deepwater Horizon rig explosion have changed his mind, adding he won’t allow such as a disaster to happen in California. It’s likely to be a contentious move, as the state faces a $20 billion budget shortfall. Critics are already saying that such accidents should not drive public policy, claiming its better that oil comes from California, where it will generate local jobs and revenues, rather than from the Middle East, Venezuela or Indonesia, where sources carry considerable political risk.

YouTube, Google’s video sharing site, claims to serve an average 96 videos each to 135 million viewers a month. So now it’s building an automated system that will enable existing content partners to rent out movies to YouTube viewers, instead of only serving them with advertisements. Such content partners include Hollywood studios. However, the company says amateur video providers won’t be able to charge for their vacation movies, and that press reports about its plans up to now have been all wrong. The rental movies will be available in 1080-pixel resolution, which is far higher than the TV and movie streams on free online video service Hulu.com that offers hit TV shows including Family Guy and 30 Rock. YouTube says this’ll provide another way for video uploaders to make money off their wares, other than from an ad-supported format. The rentals will be paid for through Google Checkout, a PayPal-like service, although the company is still experimenting with pricing. YouTube has been at pains to point out that it’s not opening the rental floodgates to independent and amateur video producers. But in time to come, Google will likely come under pressure to let copyright owners rent their works.

A complaint from Adobe may lead to yet another change in developer policy for Apple’s iPhone, after regulators were reported to be readying an antitrust probe over restrictive changes in the device’s developer agreement. The changes banned the use of tools that convert apps built on other platforms into iPhone apps. Apple’s newest policy led Adobe to give up on its Flash-to-iPhone compiler, leading the company to claim that Apple is stifling innovation. Apple’s boss Steve Jobs has made his dislike of Adobe’s Flash technology clear, arguing that Flash is too unreliable to be on the iPhone, and is a massive drain on the battery. It’s real techy stuff, and while Apple will be keen to placate regulators, Jobs’s stance against Flash and other third-party authoring tools for the iPhone makes it difficult for the company to reverse its policy.

Coffee giant Starbucks is being sued by a customer who claims that an order of tea in a New York store was too hot and came in unsafe containers, resulting in her getting second-degree burns and suffering great physical pain and mental anguish. Oh dear, that sounds like the old finding-a-cockroach-in-your-soup trick, and sure enough the customer is seeking unspecified damages. It’s deeply ironic too as the Starbucks chain is best known for its coffee. The case is similar to a 1994 lawsuit against McDonald’s when the fast-food giant was ordered to pay nearly $3 million to a plaintiff who claimed coffee scalded her.