Untouched by recalls, this Lexus is spoiling for a figh...

Untouched by recalls, this Lexus is spoiling for a fight 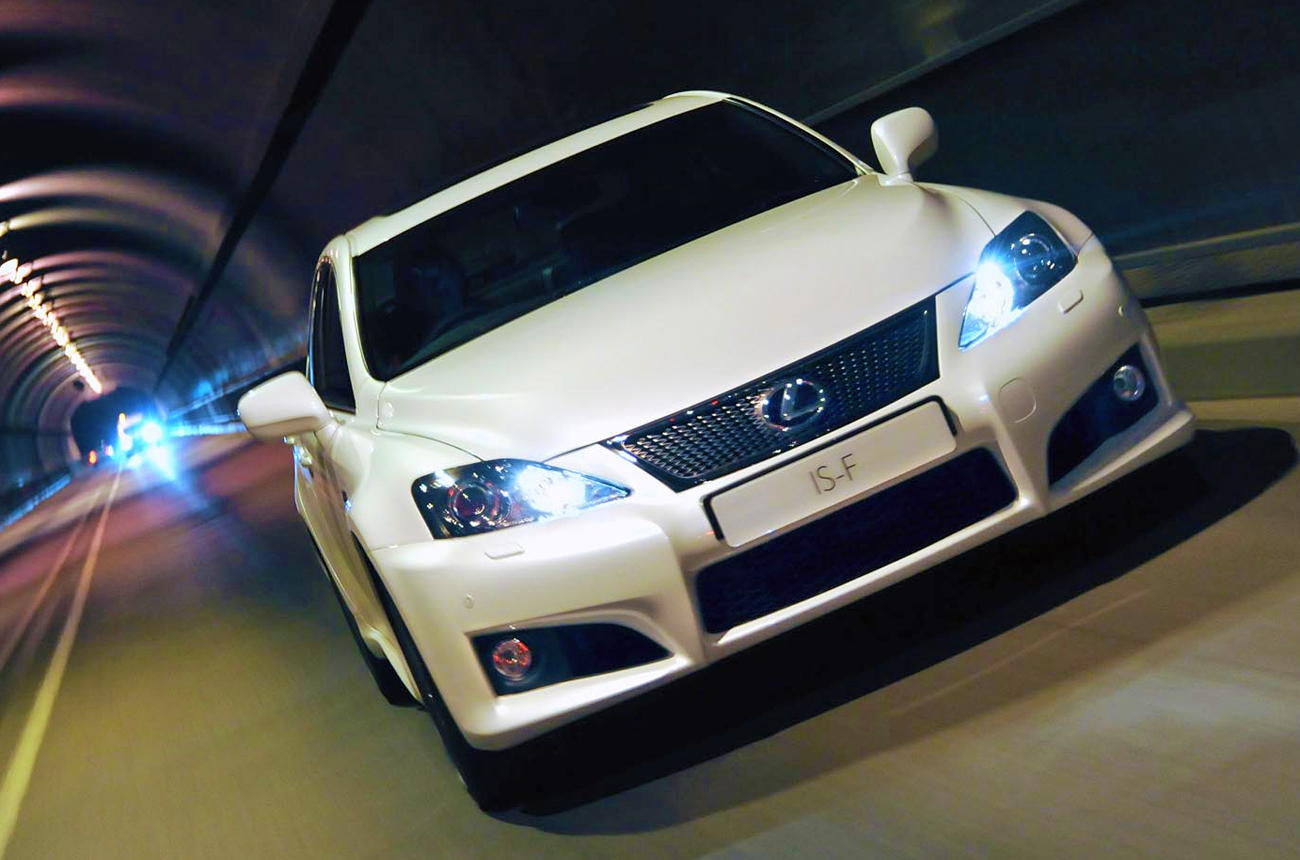 Nowhere in the motorverse is the rivalry as fierce as in the battle for super-sedan supremacy. And the protagonists are always the same: BMW M3, Mercedes-Benz C63 AMG, Audi RS4. But what’s this: a new upstart in the Fight club? Yes, sir – and it wears a Lexus badge.

Between them, these muscle machines can make many a more exotic sports car look distinctly ordinary.  But Lexus? Yes, you read it right the first time. The brand that oozes luxury, that wraps slick technology in rich leather, soft lighting and pearlescent paint has planted a designer boot in this hard-core camp. Ladies and gentlemen, please welcome, all the way from Japan’s Fuji Speedway: the Lexus IS-F.

If this four-door sedan looks vaguely familiar, it’s because the low-slung machine, with its flared wheel arches, blacked-out grille, dark-chromed wheels and ominous presence is actually based on the rakish, preppy IS250 sedan.

But there’s nothing youthful or wholesome about the IS-F. It has the hungry look of a bully spoiling for a fight. The sedan’s intentions are not only signalled by the bulging sheet metal and the quadruple tailpipes, but also by an exhaust note that resonates with the beautiful noise only a big V8 can produce.

And a big V8 it is. The aluminium lump under the bonnet may be shrouded in horrible, faux-carbon plastic, but it is a work of performance art. Although originally designed for effortless power and superior refinement, it has been radically fettled to ensure the IS-F’s entrance to the fight club.

Among the many changes to the internals, the bullet-proof forged crank is one of the stars, as are the special cylinders, developed for Lexus by  Yamaha, and featuring carefully calibrated variable valve timing. The V8 squeezes 311kW from its five-litre capacity, coupled to a huge, drivetrain-challenging 505Nm of twist – especially since all of that muscle is passed on to the rear axle. The good news is the presence of a mechanical limited-slip differential that helps to put the muscle down where it counts.

Sound good so far? Absolutely! But here’s the rub: the gearbox is not the high-tech, faster-than-you-can-blink, direct clutch transmission we expected (after all, the IS-F is the freshest card in this performance pack). Instead the car has to make do with a revived and adapted version of the Lexus eight-speed auto box with a shift action optimised for rapid cog swaps – faster, says the company, than any racing driver can achieve. Ahem, well yes – that’s on paper. Reality is a little different.

It’s not that the gearbox is slow. Tap the shift paddles behind the steering wheel’s fat  rim, and the response is instant. But it’s the way the shift occurs that’s, well, a little soft. There’s still a torque converter buried deep inside the drivetrain, and the result is a shift that slips, rather than snaps into place.

Besides, with so much torque spread so thickly across the rev range, a half-dozen gears would provide more than ample overlap to ensure immediate response to accelerator input.

But let’s drive the beast. The big, leather-trimmed chairs are bolstered for support, electrically adjustable and supremely comfortable.

As befits a serious performance car, the colour scheme inside is black. Black seats, black headlining, black dash. Even black-faced instruments. It’s dramatic, yes. But there’s an element of undertaker chic that can become depressing. Time to hit the starter button then. Next, select manual shift mode. Press the “Sport” button. Release the parking brake. Now, take a deep breath. Hook first with the shift paddles – and floor the throttle. There’s an initial hesitation, a tremble from the drivetrain, and the Lexus lunges forward.

A shift indicator beeps with measured precision each time you approach the 6,800rpm redline, and there’s almost no let-up in power delivery between shifts. Best of all, the entire performance is accompanied by a glorious bark from those quadruple exhausts.

This is a very, very rapid car – a missile that needs space to show off its pace. Lexus claims it has limited the IS-F’s top speed to 270km/h, and it feels capable of at least that. The same goes for the 4,8sec zero-to-100km/h sprint time.

But handling, response and road manners are the parameters that will ultimately determine whether the IS-F makes it through the Fight Club’s portals. And what better place to put those aspects to the test than the world-famous Kyalami Grand Prix circuit.

The IS-F rises to the challenge, cutting from apex to apex with the precision of a scalpel and showing off a penchant for subtle power slides when getting on the gas just that smidgen too early. The steering is quick enough to dial in perfect doses of opposite lock if needed, but also has ample weight and loads of useful feedback.

Switch to Sport mode, and everything takes on a slightly harder, keener edge. The steering becomes stiffer and more direct, the accelerator is as sensitive as a teenager with acne, and there’s an added urgency to the exhaust note.

Big Brembo brakes on all four corners will haul down this imposing Lexus from almost any speed without breaking a sweat. So, what’s missing? Certainly nothing in the IS-F’s cabin, which is endowed with every conceivable convenience: satnav, reversing camera, parking sensors, a Mark Levinson 14-speaker sound system, dual-zone climate control, keyless entry – and that’s only the start.

What is absent, however, is outright personality. The IS-F is almost too competent, too composed. It flatters average drivers, but doesn’t necessarily satisfy good ones. It has a huge appetite for kilometres, but leaves its occupants a cocooned from the on-tar experience.

Is that such a bad thing? Not if what you’re expecting is a Lexus. Refinement has been the brand’s holy grail from the outset and is retained in the IS-F package, while it flatters the driver. But if you want to step into the ring with M3s or AMGs, the IS-F may just be too … polite.

Realistically, more people will derive more day-to-day driving pleasure from the IS-F than from any of its rivals. But for red-blooded performance purists, it is not edgy or challenging enough.

Instead, the Lexus IS-F is the ultimate all-rounder: a true muscle car that can be as civilised, or as wild, as its driver demands. The question is this: does that make it good enough to qualify for Fight Club status?

Watch the Lexus IS-F in action at the Kyalami Grand Prix circuit on a forthcoming episode of RPM TV on SuperSport. Broadcast times can be found on the RPM TV website at www.rpmtv.co.za.