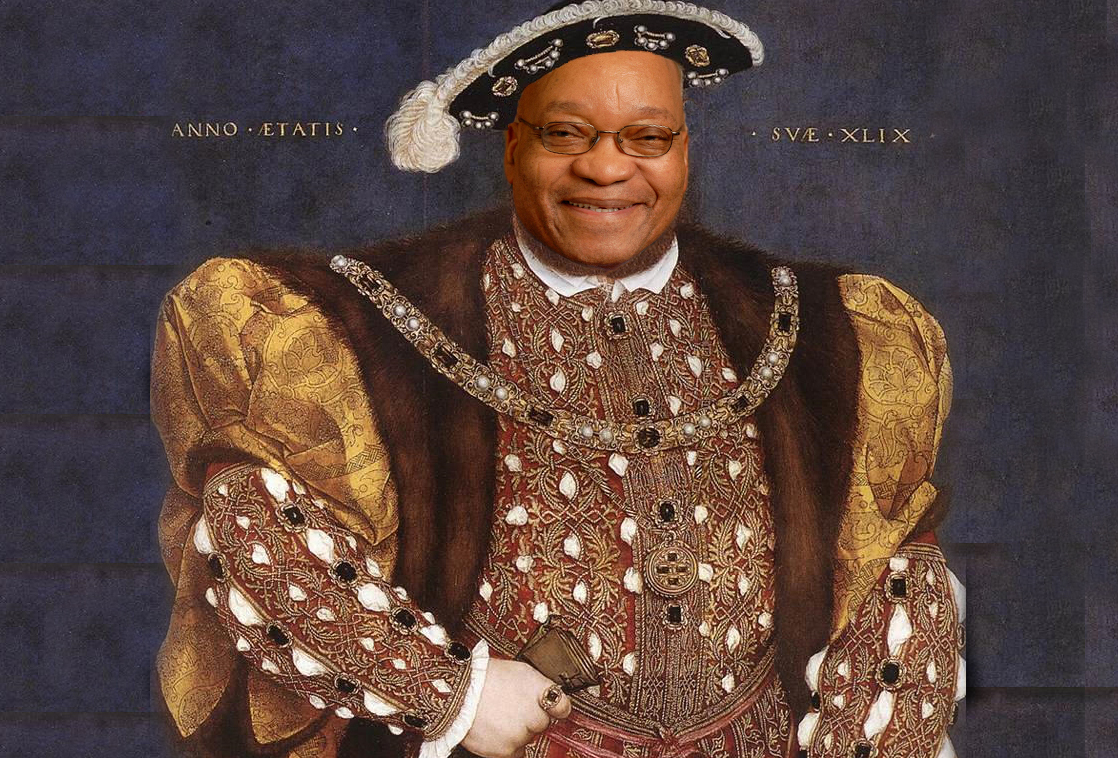 One day, when historians set out to write the book about the life of Jacob Gedleyihlekisa Zuma, they will no doubt compare it with that of another larger-than-life historical figure, King Henry VIII.

Like King Henry VIII, President Jacob Zuma is accumulating wives at a furious rate. But unlike the monogamous Henry VIII, who was faced with the uncomfortable duty of disposing of his wives, Jacob is having them all together.

And the more we learn of Zuma, the closer he compares to the famous English king, whose voracious appetite for things physical and emotional enmeshed themselves into statecraft of the time, adapting culture and religion to suit his personal purposes.

The dominant Roman Catholic Church forbade his marriage, so he started a new church. The object lesson being that if your advisor and mentor talks back at you, chop off his head and get another one (advisor, that is). And so Henry’s personal desires, grafted onto the divine right of kings, steamrollered an entire culture, changing it as it crashed through the weak and formative barriers that were supposedly in its way.

Likewise, suddenly the Constitution’s protection of privacy – introduced into the constitutional negotiations by the ANC’s opponents as a method to secure what they fancifully thought of at the time as their “way of life” – is now being hauled out as a justification for criticising the bearers of, let’s face it, a rather embarrassing message.

And like the English king, it’s almost as though Zuma’s obvious shortcomings are not what makes him unpopular, but they are the very things that increase, perhaps not his popularity, but an appeal by virtue of their undercurrent of lascivious fascination. For Zuma, polygamy provides a link to “ordinary people” and traditional culture. It connotes riches and virility, energy and sex appeal.

Yet there is a less salubrious undercurrent too. The same instinct that animates a desire to stare at road accidents animates the desire to observe inside the strange lives of multiple presidential wives and mistresses. You just have to know what happened, what’s happening and what happens next. The South African state is in grave danger of becoming a gaudy reality TV show, where notoriety and popularity become interchangeable.

Defenders of the president cite “Zulu culture” as a defence. The ANC Youth League, for example, says it will “not be agreeing to discuss private issues of elders in the public discourse, and hope that it is now a closed chapter”. Yet the principle of “don’t criticise your elders” is not just Zulu culture, but the culture of conservative elderly autocrats everywhere. He is being treated like the proverbial African “big man”.
There seems to be practically nothing South African’s would not forgive their new president. Until now, that is. There does seem some gentle criticism this time, and not just from the usual sources.

Here is Al Jazeera’s South African correspondent Haru Mutasa: “I think he should be in the media for what he is doing to run the country – not his sexual escapades. Yes, he is entitled to his private life – but maybe his advisors should consider the implications of his actions.”

Here is women’s rights activist Nomboniso Gasa writing in the Sowetan: “In a country where the hatred of women, misogyny, is rampant and there are patterns of gender inequality, the president must lead by example. In a country where there are so many girls who are victims of incest and many children who suffer paternal neglect, the president must show responsible conduct towards those he relates with. We deserve better leadership,” she concludes.

And University of Natal Zulu lecturer, Ndela Nelson Ntshangase, writing in The Times, argues that there is a great emphasis on family values in the Zulu culture and the importance of children growing up with both parents. This is why a relationship leading to the birth of an illegitimate child is not acceptable.

And what about the foreigners? What do they think? Huffington Post carries a contribution by Luso Mnthali, a freelance writer from Malawi. “As alien as this situation is to me, I have to admit it fascinates me as much as the next person. People erroneously assume sometimes just because I am African, I am going to agree with Zuma’s culture and the choices he makes. South Africa has also been trying to understand the president’s choices and I’ve seen several ‘man-in-the-street’ television interviews where a number of black people, women especially, vehemently condemn the president’s decision to keep marrying. One woman said, ‘I don’t allow it! I just cannot allow it!’”

Mnthali goes on to compare the ability to get an abortion and gay rights in the US and SA, where SA compares favourably. “In a sense, South Africa has a lot going for it, even if the president seems to want to be at odds with some basic tenets of a modern and healthy society. He and his supporters would probably say, ‘Well, that’s just according to you, and not us,’ what is modern and healthy.

“For at least some steps forward, there are some other steps backwards somewhere in the world, but South Africa cannot use this as a reason to excuse a president that is surely setting a bad example.”

King Henry VIII also faced popular criticism for his wife-swapping activities, which he brutally suppressed. Yet his wife-swapping was at least partly enmeshed into statecraft since he used the break with the Catholic Church to seize church property and enrich the crown.

For Zuma, there is no associated benefit: Unlike kings, presidents rule by persuasion, not by authority vested by God. He is in danger of becoming a risible figure not only among his opponents, but also among some of his supporters who can surely appreciate the difference between culture, practice and gratuitous impropriety.

And down that road lies trouble.