Hard-hit global hospitality sector on the mend from Covid-19

Few, if any, mainstream economic sectors were hit as hard by Covid-induced restrictions than the global hospitality sector.

Fortunately, the worst seems to be over and the recovery during 2022 has been impressive. According to the United Nations World Tourism Organisation (UNWTO), international tourism recorded an increase of 182% during the first quarter of 2022 (year on year).

Worldwide destinations welcomed an estimated 117 million tourist arrivals, compared with only 41 million during the first quarter of 2021. The fact that 40% of the first-quarter arrivals were recorded in March is a clear sign that the recovery is gathering pace.

Although international tourism remains at about 60% down from pre-Covid levels (in 2019), the recovery is expected to continue throughout 2022, especially in the wake of further easing or lifting of restrictions on travel and attendance of sporting events.

According to the UNWTO, a total of 45 destinations (of which 31 are in Europe) had no Covid-related restrictions in place as at the beginning of June.

Fortunately, South Africa is no exception, with a fairly dramatic reversal of fortunes for tourist arrivals having taken place since the end of last year.

In July 2021, only 5,000 overseas tourists visited South Africa – a mere 2.6% of the number that arrived in the same month two years earlier. 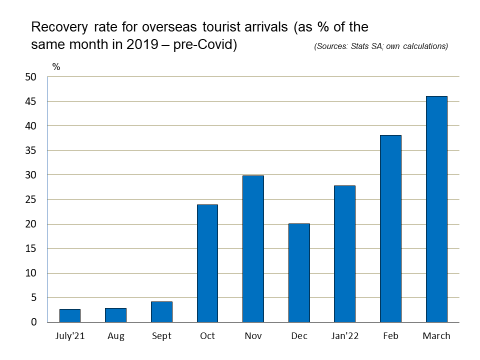 In October last year (when the splendours of spring became visible), the recovery became quite evident, with 60,000 overseas tourists embarking on our shores – almost a quarter of the pre-Covid norm.

Since January 2020, the recovery gained further momentum and in March more than 100,000 tourists arrived from overseas – close to a 50% recovery rate and higher than the global recovery benchmark.

Although a traditional drop-off in tourist arrivals is bound to occur during the South African winter – when countries such as Spain, Italy and Portugal experience tourism booms – the recovery of the domestic tourism industry should make up more lost ground once spring arrives.

It is interesting to note the existence of a correlation between source countries for overseas tourist arrivals and for foreign direct investment.

None of the countries that is favoured by the South African government – from an ideological perspective – feature in the latter two indicators, which are critically important to the further economic growth and development of South Africa.

When voting on key international issues takes place in the United Nations, it remains a point of concern (and embarrassment) that South Africa has a distinct bias towards a voting bloc that often includes the likes of Iran, Venezuela, Cuba and China – countries that have shameful human rights records. 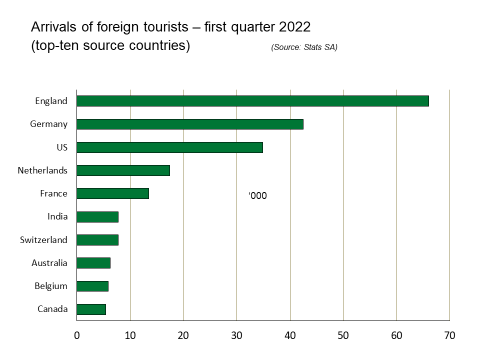 A further indication of the welcome recovery of the tourism sector can be found in the latest data on income earned by the hospitality sector.

According to Statistics SA, the turnover from accommodation by hotels and guest houses amounted to R3.8-billion during the first quarter of 2022 – more than double the figure for the same quarter last year.

The resumption in September of the biennial Africa Air & Defence (AAD) exhibition at Waterkloof Air Force Base in Pretoria is bound to provide a boost to the tourism industry.

According to Johan Nell, a board member of the Commercial Aviation Association of Southern Africa, delegates from 62 countries have already confirmed their attendance at the 2022 AAD exhibition.

When tourists visit destinations in South Africa, a catalytic effect is unleashed on these industries, as well as on retail trade. Few, if any, international tourists leave South Africa without some memorabilia, including T-shirts (probably with a lion or leopard emblazoned on them), various types of artefacts and ornaments, jewellery and often some good wine.

From a policy perspective, the significance of growth in tourism activity lies in the industry’s expanded supply chain, its relatively unregulated nature and high employment multiplier effects.

It would be useful if the CAA could heed government’s newly proclaimed policy approach of greater cooperation with the private sector, and ensure that the current obstacles to the expansion of commercial aviation are removed.

Other elements of a proactive tourism strategy should include the relaxation of visa requirements – particularly for residents from key trading partners – and improved training for public sector and airport officials who are directly involved with the arrival and departure of foreign travellers, particularly at OR Tambo International.

First impressions count, and it would be very useful to ensure that first-time visitors to South Africa feel welcome upon arrival and are not subjected to unfriendly attitudes and lengthy delays at passport control. BM/DM