Heartwarming stories of Ukraine’s pet rescuers and a symbol of hope in Gloria, the Borodyanka cat

Ten-year-old Gloria lived on the seventh floor of an apartment building in Borodyanka until it was struck by a Russian missile in March. She had no food, no water and no way to get out for a month. No one even knew she was alive in the destroyed building. Her being spotted after the deoccupation of Borodyanka was surely pure luck.

In just a couple of days, we’ll be marking the 100th day of Russia’s offensive in Ukraine. As this brutal invasion continues, I find myself under a very painful burden of bearing witness to unimaginable and inhumane war crimes being committed by Russians in my beautiful country.

All of it is so surreal and overwhelming, that writing this weekly blog post has become a form of escapism for me. Here, I get a rare chance to step back and spend an hour telling you about our wonderful people, about Ukrainians who have no choice but to roll up their sleeves and start working on any and all challenges in spite of adverse circumstances.

I’m more than honoured to share these stories of strength, exhaustion, grief, anger and heroism with you, but I also need to touch on one topic that hits very close to home for me, a millennial Ukrainian with grandparents who lived through Russia-made famine. I’m very grateful for this platform and this chance to issue a warning: it’s becoming more apparent each day that Russia’s war on Ukraine is laying the ground for what would be the worst Russia-made famine in the world.

We already have a global food supply extremely damaged by warming temperatures and the Covid-19 pandemic. Now, after three months of this unprovoked war, the world is beginning to understand that Russia is weaponising the global food supply crisis. Russia is blocking all of Ukraine’s ports and they are holding the world hostage until the sanctions imposed on them for starting the war are lifted.

They keep draining every Ukrainian city they come into of all the grain stock. Their military keeps dropping gravity bombs on grain silos and grain storages and mining the crop fields throughout Ukraine. Holodomor, or, as we also call it, the Soviet Russia-made famine, has killed up to 10 million Ukrainians. Ten million of our citizens were starved to death at the beginning of the previous century and we are extremely afraid that Russia is now moving forward with its plan to starve the world.

But I digress; let me get back on track and tell you a few more stories about our wonderful pet rescuers.

Borodyanka, a beautifully green city just outside of Kyiv, was destroyed at the very beginning of the war. This town suffered excessive shelling by Russian forces; so much so that not a single building survived and people are still being recovered. Thousands of our citizens could still remain under debris.

Borodyanka was well known as the biggest skydiving dropzone, for its beautiful parks and forests, ostrich farm, and, of course, a widely known Borodyanka pet shelter. Every Thursday, cars with volunteers drove from Kyiv to Borodyanka to play with the dogs, walk them, and let them run and enjoy life. Volunteers went every week, be it summer or winter, rain or shine. Those dogs were their friends. Many of them were adopted by the volunteers and became a part of their families. This was a big tragedy for a lot of people.

The town was occupied for almost a month and all 485 shelter residents were trapped. Borodyanka was swarming with Russian soldiers, civilian casualties were high and those who survived, stayed hidden. That’s why beloved dogs were left in their kennels without any food and water, and no way to get to them. Dogs, once loved and very well taken care of, were left to starve.

At the very moment the authorities announced the liberation of the region, volunteers from UAanimals raced to Borodyanka. When we say that Russians want to destroy every living thing in Ukraine, it’s not just words, it’s fact: footage and images shared on social media by the rescuers showed piles and piles of bodies of severely malnourished dogs. I’m not going to share any of those photos — they are horrifying and impossible to forget. But, if you are doing research, the images are easily accessible online.

If you are wondering how this horrific story became a beam of hope for us, we didn’t expect any survivors, yet, when UAanimals entered the premises, they were ecstatic to see 150 of them! They were starved and sick, but alive.

Today, I’m happy to report that most of our precious friends rescued from Borodyanka have already found new families, moved to new towns, and a lot of them immigrated to new countries. You can check out their individual stories and see their recoveries on Facebook #rescuedfromBorodyanka.

Gloria, the luckiest cat in the world

This is a story that needs no words and you’ll see why. Gloria, the Borodyanka cat, is now nothing less than our national hero.

Gloria became famous because the story of her salvation is a real miracle. She is 10 years old and happily lived on the seventh floor of an apartment building in Borodyanka until it was struck by a Russian missile in March. She had no food, no water and no way to get out for a month. Furthermore, there was no one that even knew she was alive and trapped in the destroyed building. Her being spotted up there after the deoccupation of Borodyanka was surely pure luck.

People immediately contacted ZooPatrol, the Ukrainian volunteer group that has already performed more than one miracle during this war. Lo and behold: they’ve performed another one. Please enjoy these photos shared online by almost every single Ukrainian: they’re of Gloria’s and ZooPatrol’s heroic tale in five impressive photos. 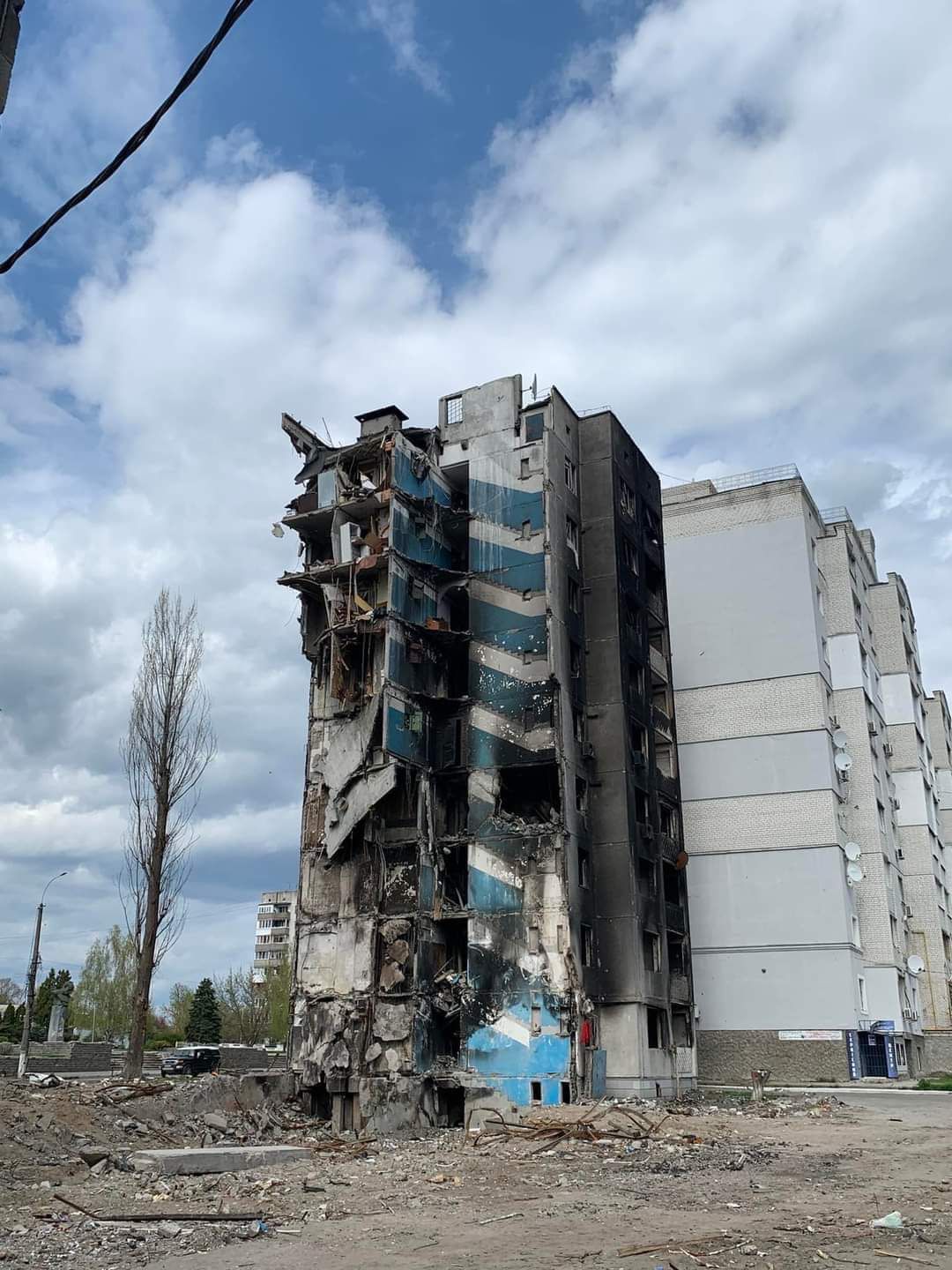 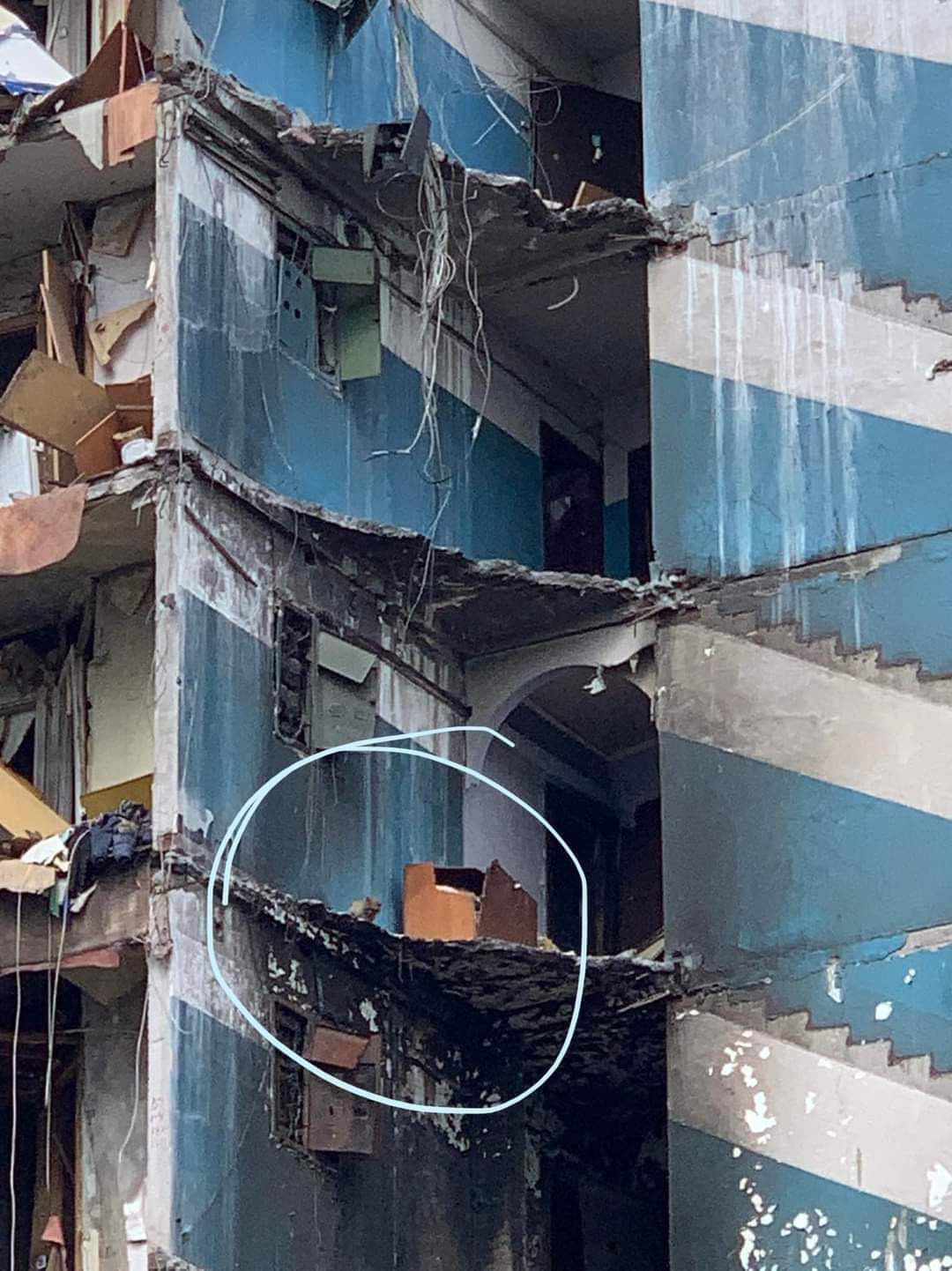 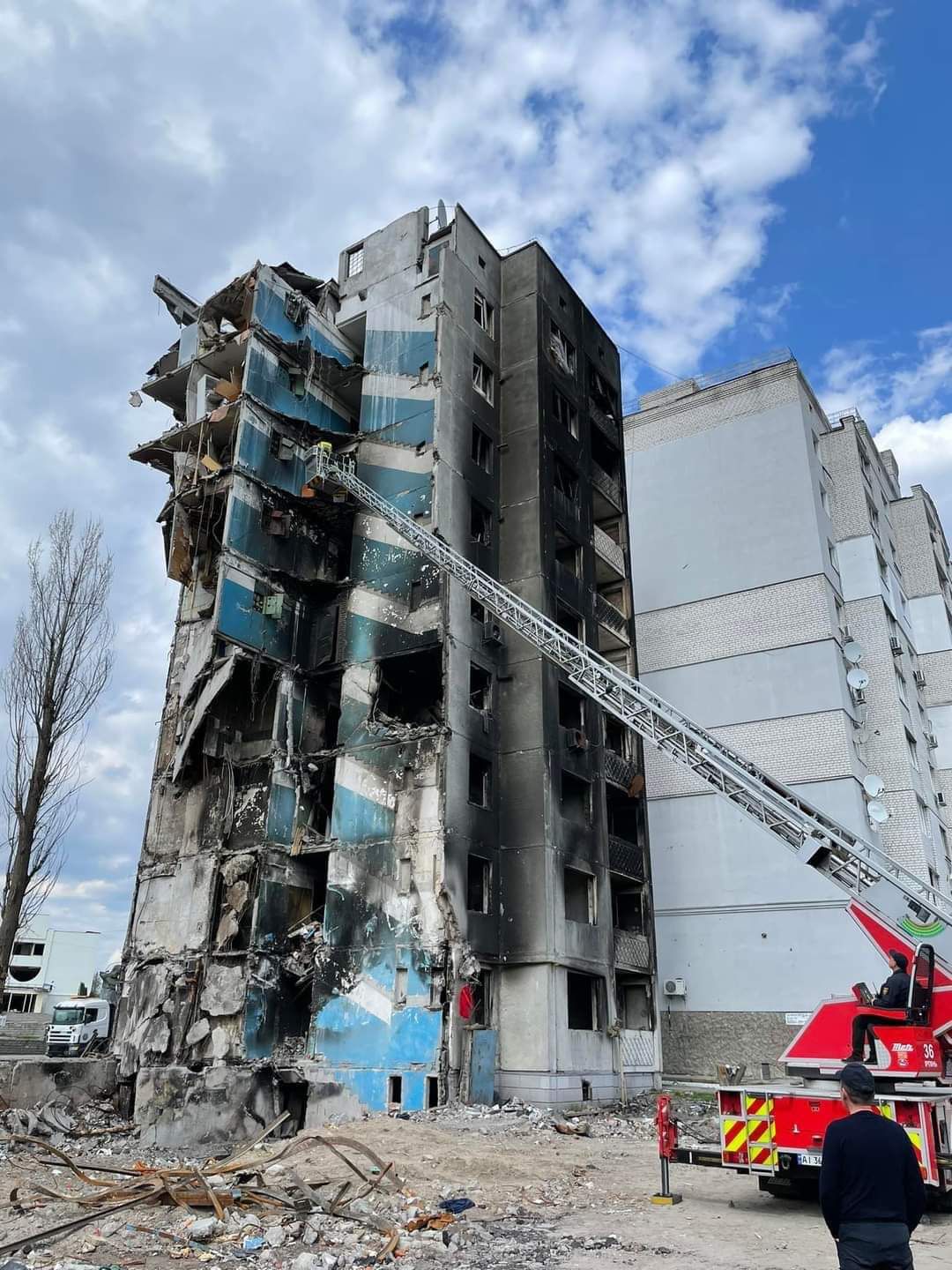 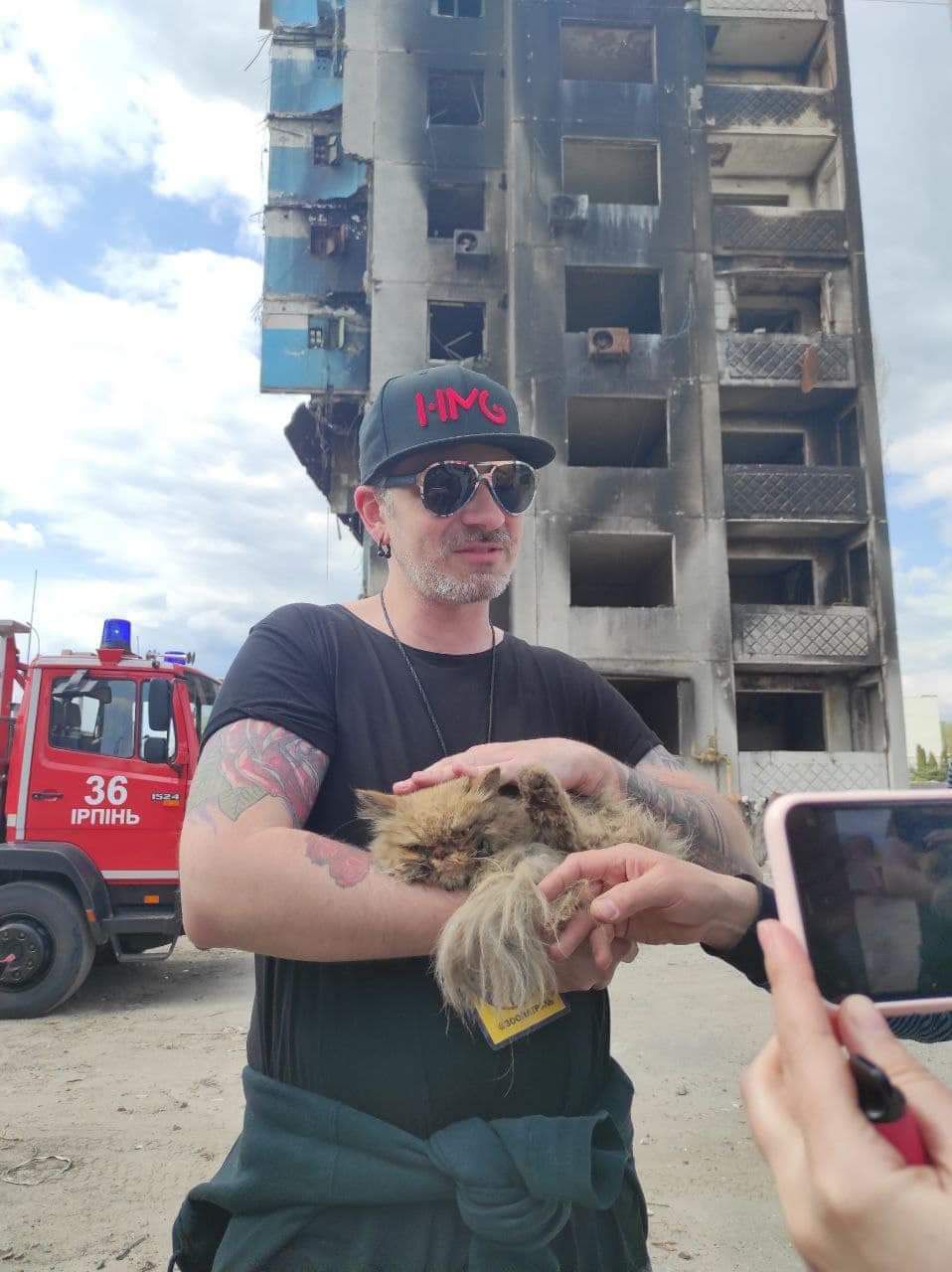 I want to end this week’s post by sincerely thanking countless foreign pet rescue organisations, those which stepped forward to lend us a helping hand, those which stand with us and continue helping us to take care of our animals in these devastating times.

As the war continues to unfold, our neighbours — Poland, Latvia, Romania, etc — have fully lifted all of the requirements previously in place for pets to enter their countries. And, I assure you, this decision has saved countless lives of Ukrainians. I personally know people who would have never abandoned their family pets in Ukraine when moving abroad. Thus, the ability to cross the border to safety without a certificate of vaccination or a veterinary passport has played a major role in our lives.

Also, we have countless foreign volunteers working with our pet rescuers to find our dogs and cats new homes. They’ve created pet drop-off spots on the border, emergency adoption centres and emergency shelters. We’re eternally grateful for the compassion, the empathy and continued generosity that will never be forgotten or taken for granted. DM