Michael Settas is a member of the Free Market Foundation’s Health Policy Unit. He has provided strategic consulting to health funders and managers, and currently runs his own health insurance business.

There can be no accounting for the galactic difference in the medical malpractice liability between the Eastern and Western Cape. If the Eastern Cape was a private medical institution, it would have filed for bankruptcy years ago. It remains in existence under the funding from National Treasury – aka taxpayers – who are supporting a liability that has grown by an astonishing R5.2-billion per annum from 2014/15 to 2018/19.

The Covid-19 pandemic, now running its third wave through the province, has laid bare for all the rot emanating from Bhisho, with the province’s health department justly becoming the poster child for gross ineptitude. And given the parlous state of many of the other provincial health departments, it takes some effort to top this notorious list.

The Eastern Cape’s medical malpractice liability is by a long shot the highest of all the provinces. At R29-billion for the 2018/19 financial year, this figure accounts for 30% of the state’s entire medical malpractice liability, even though the Eastern Cape only accounts for 12% of the nation’s uninsured population (i.e. not on medical aid). Their liability exceeds the province’s entire annual budget (R24-billion) for the same year by R5-billion.

Various articles quote medical staff in the Eastern Cape as citing understaffing and a lack of budget as the eminent problems. But a comparative analysis of results from the province’s neighbour, the Western Cape, indicates that this argument does not stack up to scrutiny.

I have no doubt of the arduous and stressful experiences of frontline staff, most notably during the past 18 months, where the Eastern Cape has been hit hard by the Covid-19 pandemic.

But the point of this article is this: good clinical outcomes are fundamentally a result of quality management and adherence to proper governance frameworks. Once these are destroyed – as the ANC has so adeptly done through its policies of centralisation and cadre deployment – no amount of money or medical personnel will bring about an overall improvement in clinical outcomes.

Frontline medical staff are thus left hanging in the wind, trying their best to overcome health system challenges that are unrelated to their core competency of delivering medical care to patients.

The Western Cape has largely been able to preserve its governance framework and restrain the levels of cadre deployment and corruption seen in other provinces. The primary reason it has achieved this, is that it has for years been governed by the principally different DA.

So, what does adherence to such good principles tell us?

Below is a table showing a comparative barometer of these two health departments for 2018/19. The data are derived from the annual reports of these provinces, Stats SA and several other health publications, such as Health Systems Trust: 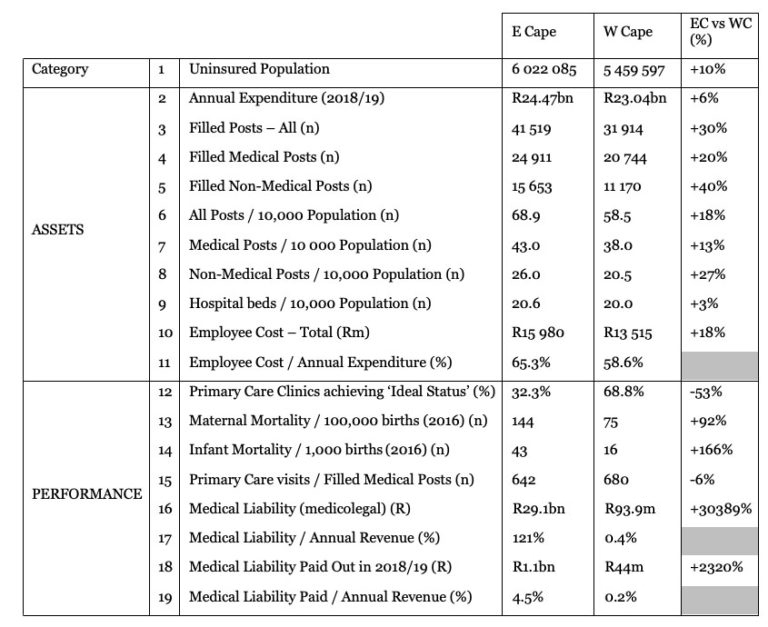 In every item within the category of “ASSETS” (rows two to 11), the Eastern Cape has more money, more personnel and more facilities than the Western Cape.

Yet, in terms of “PERFORMANCE” (rows 12 to 19), the Western Cape is superior in every metric – in most instances by a very substantial margin.

The Ideal Clinic and Realisation and Maintenance Programme, started by the national Department of Health a few years ago, reflects one such contrast. Just over 32% of clinics in the Eastern Cape have achieved “ideal clinic” status, whereas the Western Cape has reached nearly 69% (row 12).

Looking at standard proxy indicators of competent facility management, such as maternal and infant mortality rates, (rows 13 and 14) the Western Cape again achieves significantly better results – also the best in the country – at 75 and 16, respectively, whereas the Eastern Cape achieves 144 and 43, respectively.

What these figures mean is that, for every 100 babies born in the Eastern Cape, more than four mothers will mourn the death of their newborn.

Some may decry that the disease burden and population density of the Eastern Cape are different to that of the Western Cape. That may be true, but the vastly greater assets should accommodate such differences.

In any event, there can be no accounting for the galactic difference in the medical malpractice liability between the provinces. If the Eastern Cape was a private medical institution, it would have filed for bankruptcy years ago. It remains in existence under the funding from National Treasury – aka taxpayers – who are supporting a liability that has grown by an astonishing R5.2-billion per annum from 2014/15 to 2018/19.

The following statement is recorded in the province’s 2018/19 annual report (Sect 2.1.5, pg 36): “The Department has in the past and continue [sic] to sustain high financial losses due to the scourge of Medico-legal Cases.”

It surely is a scourge – most especially for patients in need of quality healthcare.

The Eastern Cape reflects the grossly bloated nature of government under the ANC’s well-established cadre deployment policy, and resultant corruption and poor service delivery. This is now taken for granted by the governing party, defining its nature as being entirely incapable of disentwining itself from its own destructive strategies. DM

(Author’s Note: I have used 2018/19 figures throughout this article as there is one province that has yet to publish its 2019/20 financials on the Department of Health website. I leave you to guess the absent province!)