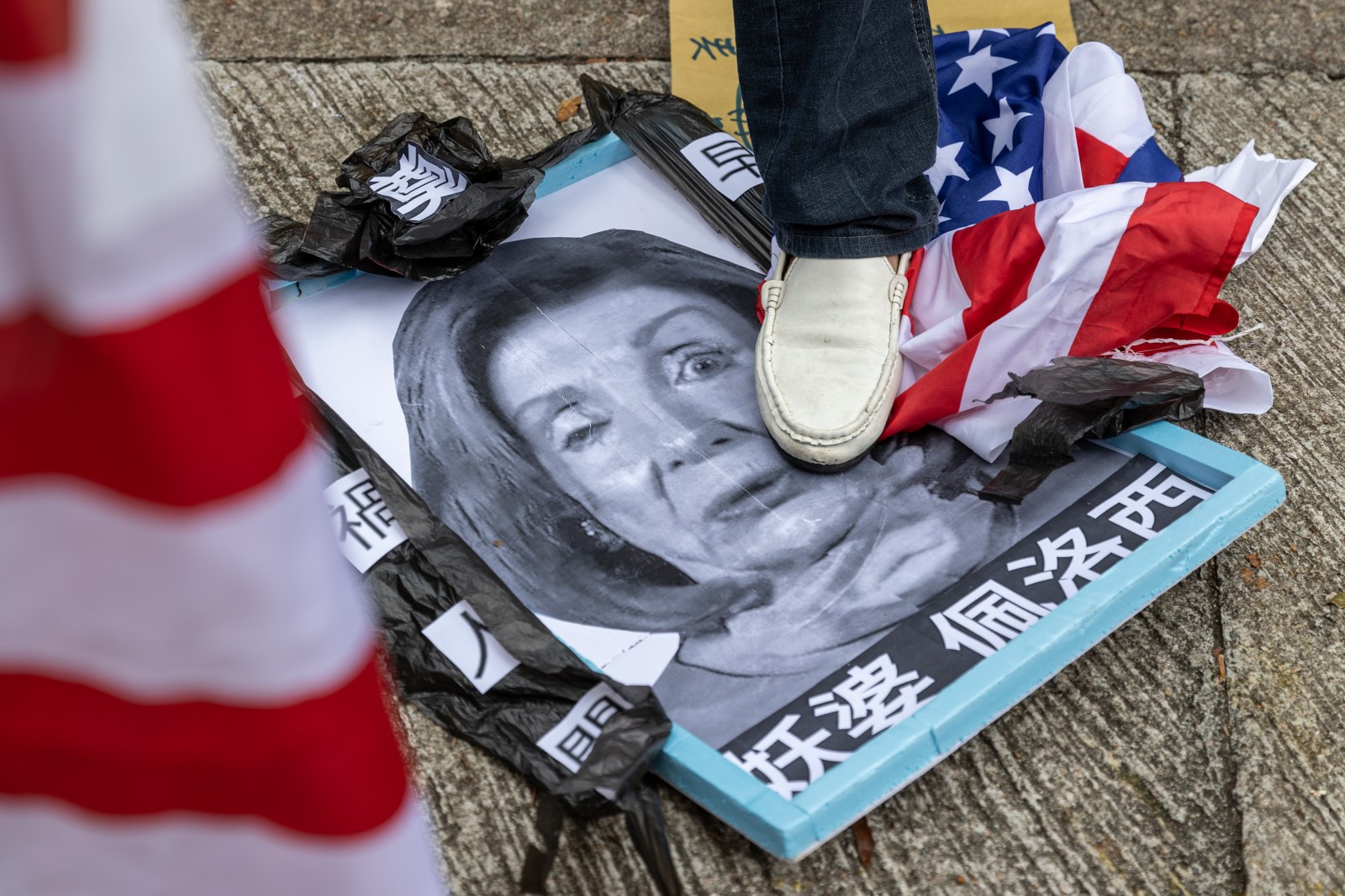 A group of pro-China supporters steps on a mock up funeral photo of US House Speaker Nancy Pelosi outside of the US Consulate General in Hong Kong and Macau, in Hong Kong, China, 03 August 2022. The group protested the visit to Taiwan by Nancy Pelosi who is leading a Congressional delegation to the Indo-Pacific region with stops in Singapore, Malaysia, South Korea and Japan. (Photo: EPA-EFE / Jerome Favre)

Hackers have attacked Taiwan’s defence ministry website and suspected drones flew over outlying islands, authorities in Taipei said on Thursday, a day after a visit by US House of Representatives Speaker Nancy Pelosi that outraged China.

China was to begin a series of military exercises around Taiwan on Thursday in response to Pelosi’s visit, some of which were to take place within the island’s sea and air territory, according to the defence ministry in Taipei.

That has never happened before and a senior ministry official described the potential move as “amounting to a sea and air blockade of Taiwan”.

China, which claims Taiwan as its own territory, said on Thursday its differences with the self-ruled island were an internal affair. Read full story

China’s Xinhua news agency has said the exercises, involving live fire drills, will take place in six areas which ring Taiwan and will begin at 0400 GMT.

Major General Chang Zone-sung of the army’s Kinmen Defence Command told Reuters that the drones came in a pair and flew into the Kinmen area twice on Wednesday night, at around 9pm and 10pm.

“We immediately fired flares to issue warnings and to drive them away. After that, they turned around. They came into our restricted area and that’s why we dispersed them,” he said.

The heavily fortified Kinmen islands are just off the southeastern coast of China, near the city of Xiamen.

Pelosi, the highest-level US visitor to Taiwan in 25 years, praised its democracy and pledged American solidarity during her brief stopover, adding that Chinese anger could not stop world leaders from travelling there.

China summoned the US ambassador in Beijing and halted several agricultural imports from Taiwan.

Security in the area around the US Embassy in Beijing remained unusually tight on Thursday as it has been throughout this week.

Although Chinese social media users have vented fury on Pelosi, there were no signs of significant protests or calls to boycott US products.

‘Will not abandon Taiwan’

Taiwan scrambled jets on Wednesday to warn away 27 Chinese aircraft in its air defence zone, the island’s defence ministry said, adding that 22 of them crossed the median line separating the island from China. Read full story

Pelosi arrived with a congressional delegation on her unannounced but closely watched visit late on Tuesday, defying China’s repeated warnings and amid sharply deteriorating US-Chinese relations.

“Our delegation came to Taiwan to make unequivocally clear that we will not abandon Taiwan,” Pelosi told Taiwan’s President Tsai Ing-wen, who Beijing suspects of pushing for formal independence – a red line for China. Read full story

“Now, more than ever, America’s solidarity with Taiwan is crucial, and that’s the message we are bringing here today.”

China considers Taiwan part of its territory and has never renounced using force to bring it under its control. The United States and the foreign ministers of the Group of Seven nations warned China against using the visit as a pretext for military action against Taiwan.

“Sadly, Taiwan has been prevented from participating in global meetings, most recently the World Health Organization, because of objections by the Chinese Communist Party,” Pelosi said in a statement issued after her departure.

“While they may prevent Taiwan from sending its leaders to global forums, they cannot prevent world leaders or anyone from travelling to Taiwan to pay respect to its flourishing democracy, to highlight its many successes and to reaffirm our commitment to continued collaboration,” Pelosi added.