ON YOUR SCREENS IN AUGUST 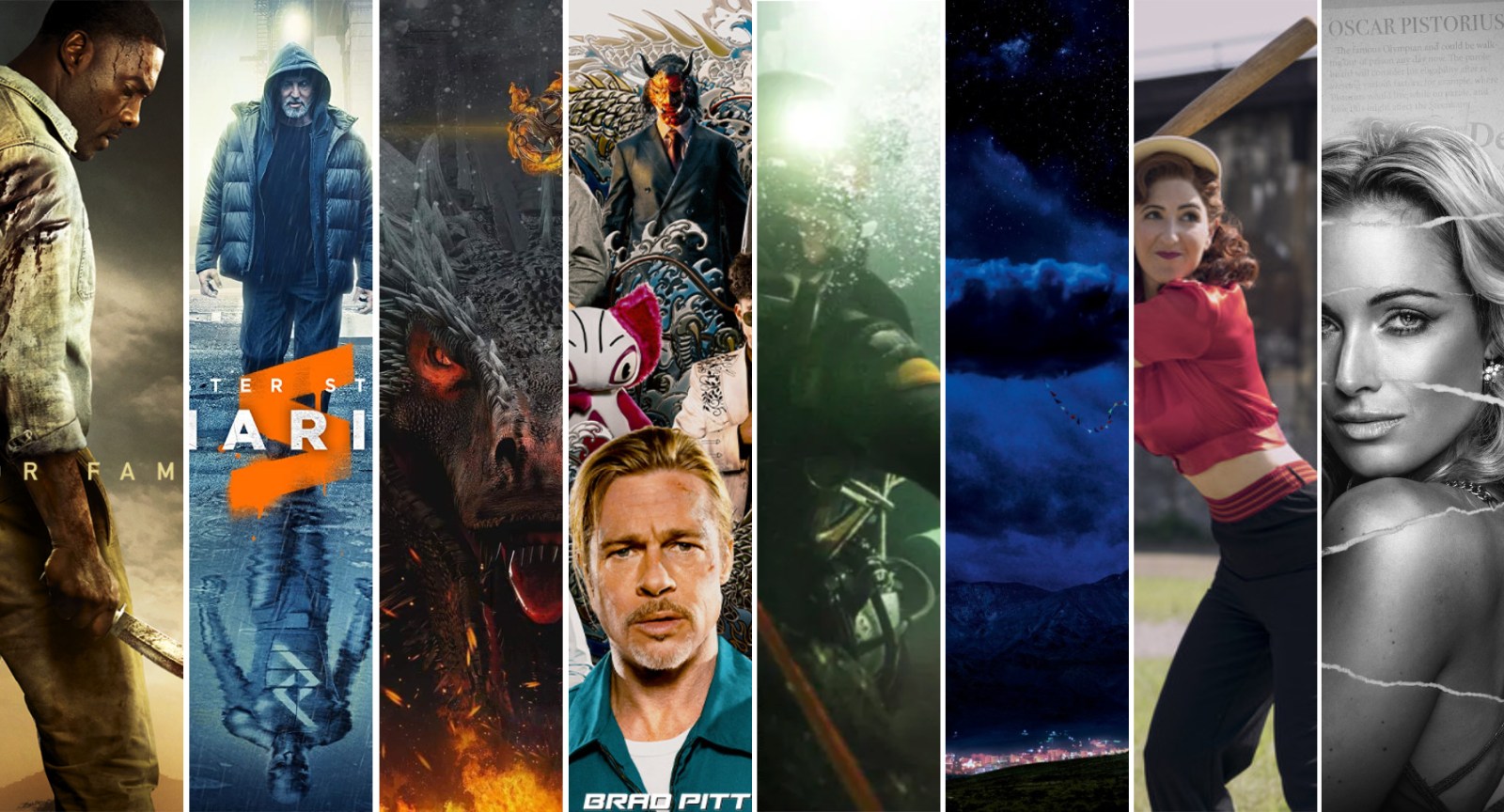 Films and series to look out for in August 2022. Images: Supplied

Maverick Life’s pick of films and series to look out for in August 2022 in cinemas, on Prime Video, Apple TV+, Britbox and M-Net.

Brad Pitt stars as an assassin returning to work for an apparently simple mission to pick up a briefcase on a bullet train from Tokyo to Kyoto. His handler (Sandra Bullock) renames him Ladybug in an attempt to shift his perception of his “biblical” bad luck, but it definitely doesn’t seem to be working. Directed by David Leitch, who did Deadpool 2, expect equally ridiculous, dark, action-packed comedy.

An adventure thriller that sees Idris Elba up against a lion; filmed on location in Cape Town, Limpopo and the Northern Cape. Elba plays a recently widowed husband who returns to South Africa with his daughters to visit a game reserve managed by an old family friend (Sharlto Copley). Their trip quickly devolves into a fight for survival, as the family evades the ferocious beast stalking them. It’s a full feature of jump-scares and far-fetched R-rated blockbuster magic with Elba in hunky hero mode. Think Jaws with a lion.

Jordan Peele directs another suspenseful sci-fi horror epic. Daniel Kaluuya, who starred in Peele’s Get Out, returns as the lead – a Californian rancher struggling to maintain the family horse ranch with his sister, played by Keke Palmer (Hustlers,  Alice). When the sibling duo bear witness to an inexplicable phenomenon in the sky, they become determined to capture evidence of this apparently supernatural occurrence.

A biographical thriller drama about the 18-day rescue mission to get a group of boys and their soccer coach out of a flooded cave in Thailand in 2018. Ron Howard directs an ensemble cast (led by Viggo Mortensen and Colin Farrell) with a notably earnest and underplayed approach to the acting, while emphasising the drama of the rescue itself.

Amazon has rebooted Penny Marshall’s 1992 CBS sports comedy based on a true story about women’s pro league baseball in 1943. Abbi Jacobson is the showrunner, co-creator, executive producer and star of the eight-episode series, which features a completely different set of characters than the original script. With a cast full of personality, it has the makings of a fittingly hilarious successor to the classic film.

An Amazon exclusive action film in which a boy discovers that the old rubbish collector who lives across the street (Sylvester Stallone) may secretly be a superhero past his prime who went missing decades ago. Previously adapted into a series of one-shot Marvel graphic novels, it’s yet another dark, realist take on the superhero genre.

The debut feature from Skydance Animation, led by the former ex-Pixar frontman John Lasseter. In this computer-animated family comedy, the unluckiest person in the world is suddenly transported to the mystical Land of Luck, where she teams up with magical creatures to unlock a force even more powerful than luck.

An eight-episode medical drama miniseries by filmmakers John Ridley (12 Years a Slave) and Carlton Cuse (Lost) based on the true events written about by Pulitzer Prize-winning journalist Sheri Fink. Set in New Orleans in the immediate aftermath of Hurricane Katrina, with floodwaters rushing in, the series follows the attempts by caregivers in a local hospital to keep their patients alive.

An English-language adaptation of the Belgian series Clan, set instead on the Irish coast, about a band of sisters whose promise to look out for one another after their parents’ deaths sees them wrapped up in a different murder case. The dark comedy thriller stars Sharon Horgan, Anne-Marie Duff, Eva Birthistle, Sarah Greene and Eve Hewson.

A two-part 2013 period film dramatising the 1963 hijacking of a train near London – at the time, the biggest and most ambitious robbery in Britain’s history. Part 1, The Great Train Robbery, shows the heist from the perspective of the brutal mid-level thugs (led by Luke Evans) who pulled it off. Part 2, A Copper’s Tale, flips to the viewpoint of the elite team of investigators (led by Jim Broadbent) attempting to catch the culprits before they can make it out of Britain; all amid a media frenzy.

Conleth Hill (Game of Thrones, Vienna Blood) stars in an adaption of TV presenter Graham Norton’s darkly witty murder mystery novel. PJ is a police officer with an eating disorder whose thoroughly boring routine in the quiet fictional village of Duneen, West Cork, is suddenly consumed by the discovery of a missing local legend’s body, leaving PJ with the responsibility of solving a high-stakes crime for the first time in his career.

The Thief, His Wife and the Canoe: 23 August

A four-part drama miniseries based on the true story of John Darwin, who faked his own death to commit insurance fraud and convinced his wife, Anne Darwin, to deceive friends, family and police into believing that he’d gone missing while canoeing off the coast of Seaton Carew in Cleveland when he was actually living next door. The series focuses particularly on how Anne (played by Monica Dolan of A Very British Scandal and The Dig) slowly became complicit in the crimes of her husband (played by Eddie Marsan of Ray Donovan, Sherlock Holmes, The Gentlemen)

House of the Dragon: Episodes released weekly from 22 August

My Name Is Reeva: Episodes released weekly from 25 August

Nine years after Oscar Pistorius killed Reeva Steenkamp, this three-part true-crime series directed by filmmaker Warren Batchelor pays tribute to Steenkamp and examines the events that led up to her death on Valentine’s Day in 2013. Batchelor’s series makes the point that the public nature of the trial, which was viewed by millions, overshadowed the woman who was the actual victim of the crime. DM/ML

Want more? Also read Movies, series and games coming soon to a screen near you

Movies, series and games coming soon to a screen near you