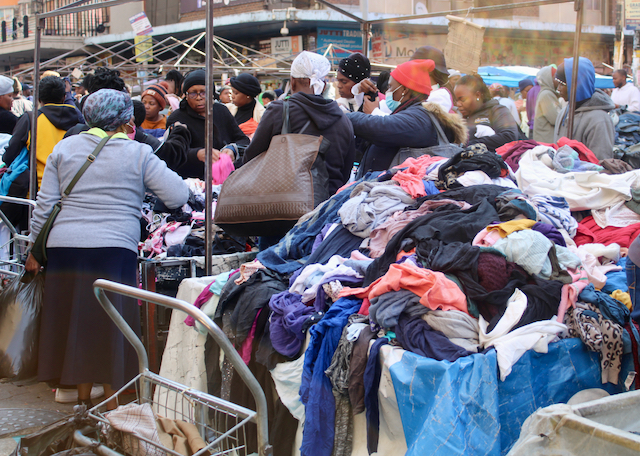 Business is bustling again in the second-hand clothing market in De Villiers Street, but traders are nervous about their future. Photo: Kimberly Mutandiro

Traders in the bustling second-hand clothes market along De Villiers Street in the Johannesburg city centre say they fear for their safety after threats to lawyers who defended them from eviction.

The traders were evicted by Johannesburg metro police on 19 July. They say members of Operation Dudula, who had confronted them a week before, also took part in the eviction.

Lawyers for the Socio-Economic Rights Institute (Seri), representing the SA Informal Traders Forum, succeeded in getting the eviction overturned in court.

The Gauteng high court ruled in favour of the traders and issued an order allowing them to return to their stalls. According to a statement issued by Seri on 1 August, the City consented to the order according to its own proposals.

Commenting on the court case on Twitter, MMC for Economic Development Nkululeko Mbundu (ActionSA) claimed the traders were immigrants and that South Africans were being used as a “front” by Seri. He said the trading precinct would be “invaded” as a result of the court order.

Seri said his comments prompted a response on social media, with threats to burn down the institute’s offices, kill the lawyers and harm the staff. Staff had also received threatening phone calls.

Mbundu has denied, through his spokesperson, that he incited violence in any way.

But the threats to Seri have left the traders worried.

“This also poses questions about our safety in the long run,” said Ayanda Kela, vice chairperson of the African Traders Organisation (ATO), who is also a trader.

Many are immigrants from Nigeria, Mozambique, Malawi, the DRC and there are also traders from South Africa. Some say they have been trading at De Villiers Street for over two decades, such as Morris Abiodun Azobandu, originally from Nigeria, who started trading on De Villiers Street 22 years ago, and Emmanuel Akuwara, who is married to a South African, and has been at the market since 2004.

The traders sell second-hand clothing and shoes. The place is so popular it has been nicknamed Edgars and Mr Price, after the big clothing retailers.

Resellers who buy in bulk also sell in other South African townships and neighbouring countries like Zambia, Botswana, Zimbabwe and Malawi. GroundUp met Isaac Makata, who travels from Malawi every fortnight to fetch stock and has been doing so for over five years.

Kela says they were surprised when on 19 July traders arrived to find metro police officers telling them not to trade, and officials of the City accompanied by Mbundu.

He says they have been registered by the Metro Trading Company and pay rent to the Johannesburg Property Company.

“We were all given smartcards and are trading legally. The surprising thing is we are being chased away by the very same person [Mbundu] who is collecting rent from us.

“Initially they claimed to be after undocumented migrants, but they are now going after people with legal status,” said Kela.

ATO general secretary and trader Matron Mhlanga said, “All places where foreign nationals are trading are being targeted.”

Mmatshepo Oganne, City of Johannesburg spokesperson for economic development, said the department had “embarked on an operation to verify traders in the inner city” as part of implementing the Informal Trading Policy approved in April 2022. This coincided with Operation Buya Mthetho, led by the Department of Public Safety.

Oganne said the verification process found that the area had “approximately 400 informal traders in excess of the City’s records of the permitted traders” who were not on the rental roll. “This reduces the earnings capacity of the legal traders and poses an unmanageable burden on the City’s ability to provide adequate services in accordance with the Informal Trading Policy and by-laws.”

Mbundu’s spokesperson said allegations that his remarks had incited violence were “completely false”. “The MMC condemns violence in the strongest possible terms. The MMC retweeted a press statement issued by Seri and which Seri had initially tweeted from its Twitter account. The statement included the names and contact details of the contactable Seri staff, as a press statement usually does. By no means did the MMC incite violence in any shape or form.”

He said there were no anti-immigrant intentions behind the City exercising its duties to verify informal traders. DM