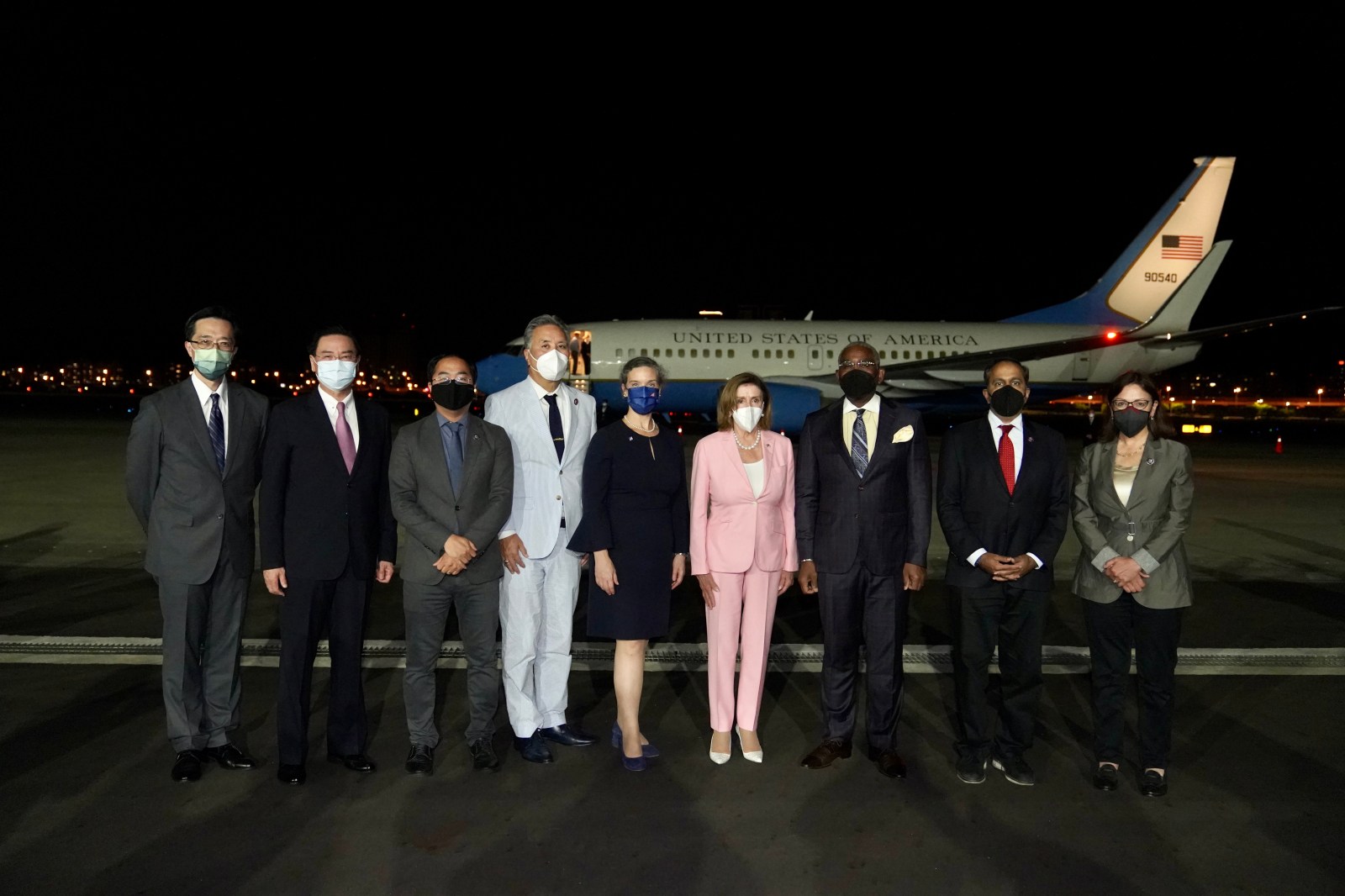 US House Speaker Nancy Pelosi (centre) poses for a group photo with Taiwan Foreign Minister Joseph Wu (second left) and other officials as she arrives at the Songshan airport in Taipei, Taiwan, 2 August 2022. Pelosi is the highest-ranking US official to visit the island in 25 years, despite strong warnings from China against the visit. (Photo: EPA-EFE / Taiwan Ministry of Foreign Affairs)

(Bloomberg) — US House Speaker Nancy Pelosi became the highest-ranking American politician to visit Taiwan in 25 years, prompting China to announce missile tests and military drills encircling the island that set the stage for some of its most provocative actions in decades.

Pelosi on Tuesday night greeted Taiwanese officials including Foreign Minister Joseph Wu on the tarmac, where she posed for photos. She plans to hold a joint press briefing with President Tsai Ing-wen at 10.53am on Wednesday, Taiwan’s Foreign Ministry said in a statement.

Pelosi said after landing that her visit “in no way contradicts longstanding United States policy” and that America “continues to oppose unilateral efforts to change the status quo”.

“Our congressional delegation’s visit to Taiwan honours America’s unwavering commitment to supporting Taiwan’s vibrant democracy,” she said in a statement.

As Pelosi arrived, China condemned the visit and announced it would stage a series of military drills including “long-range live firing” near Taiwan starting as soon as Tuesday evening, as well as more drills encircling the island from August 4.

The drills are the most significant show of force by China around Taiwan since at least 1995, when Beijing test-fired missiles into the sea near the island in response to Taiwan’s first democratically elected president, Lee Teng-hui, visiting the US. Back then, China also declared exclusion zones around target areas during the tests, disrupting shipping and air traffic.

“China will take all necessary measures to resolutely defend national sovereignty and territorial integrity, and all consequences must be borne by the US and the Taiwan independence forces,” the Foreign Ministry in Beijing said in a statement after Pelosi landed. The ministry summoned the US ambassador to protest against Pelosi’s visit, according to state media.

China, which regards Taiwan as part of its territory, had vowed an unspecified military response ahead of Pelosi’s visit, which risks sparking a crisis between the world’s biggest economies. President Xi Jinping told President Joe Biden last week he would “resolutely safeguard China’s national sovereignty and territorial integrity” and that “whoever plays with fire will get burned”.

“We are going to make sure that she has a safe and secure visit,” John Kirby, a spokesman for the White House National Security Council, said on CNN. “We will not be intimidated or deterred from all of our other security commitments in the region because of the Chinese rhetoric or even some of their actions.”

Traders braced for bad news ahead of the visit, with stocks sliding and haven assets such as the yen and Treasuries climbing. While there are few signs China is planning a full-scale invasion of Taiwan, Beijing has responded to past visits by foreign officials with large sorties into Taiwan’s air defence identification zone or across the median line that divides the strait.

Taiwan faced cyberattacks ahead of Pelosi’s arrival, with the presidential office saying it suffered a 20-minute barrage in the early evening hours that was 200 times worse than usual. The website of the Foreign Ministry also appeared to face periodic disruptions.

Taiwan’s Defence Ministry said in a statement Tuesday that the island’s military was prepared to send “appropriate armed forces according to the threat,” adding that it was “determined, confident and capable of ensuring national security.”

Pelosi is the highest-ranking American politician to visit Taiwan since then House Speaker Newt Gingrich in 1997. That came shortly after the last major crisis in the Taiwan Strait, when China lobbed missiles into the sea near ports and then President Bill Clinton sent two aircraft carrier battle groups to the area.

Pelosi will visit Taiwan’s parliament on Wednesday morning, have lunch with President Tsai Ing-wen and also meet democracy activists, according to local media reports. The previously unannounced stop in Taiwan comes after Pelosi led a congressional delegation to Singapore and Malaysia. They will head next to South Korea and Japan — two staunch US allies.

While the White House has sought to dial back rising tensions with China, emphasising that Congress is an independent branch of government, Beijing has rejected that argument. On Tuesday, Chinese Foreign Ministry spokeswoman Hua Chunying slammed the “provocative” visit and said any countermeasures from Beijing would be “justified.” Still, she left the door open for a possible in-person summit between Biden and Xi later this year.

Taiwan remains the most sensitive issue between the US and China, with the potential to one day spark a military conflict. Biden said in May that Washington would intervene to defend Taiwan in any attack from China, although the White House later clarified he meant the US would provide weapons, in accordance with existing agreements.

Chinese media outlets including the Communist Party’s Global Times have suggested the People’s Liberation Army would respond aggressively to a Pelosi trip, possibly by sending military aircraft over the island.

Under an agreement reached in 1978 to normalise relations between China and the US, Washington agreed to recognise only Beijing as the seat of China’s government, while acknowledging — but not endorsing — the Chinese position that there is but one China and Taiwan is part of China.

The US has insisted that any unification between the island and mainland must be peaceful, and supplied Taiwan with advanced weaponry while remaining deliberately ambiguous about whether US forces would help defend against a Chinese attack.

Visits by lower-level US lawmakers have also prompted military responses by China. Last November, Chinese warplanes flew around the east side of the island after a visit by a US congressional delegation.