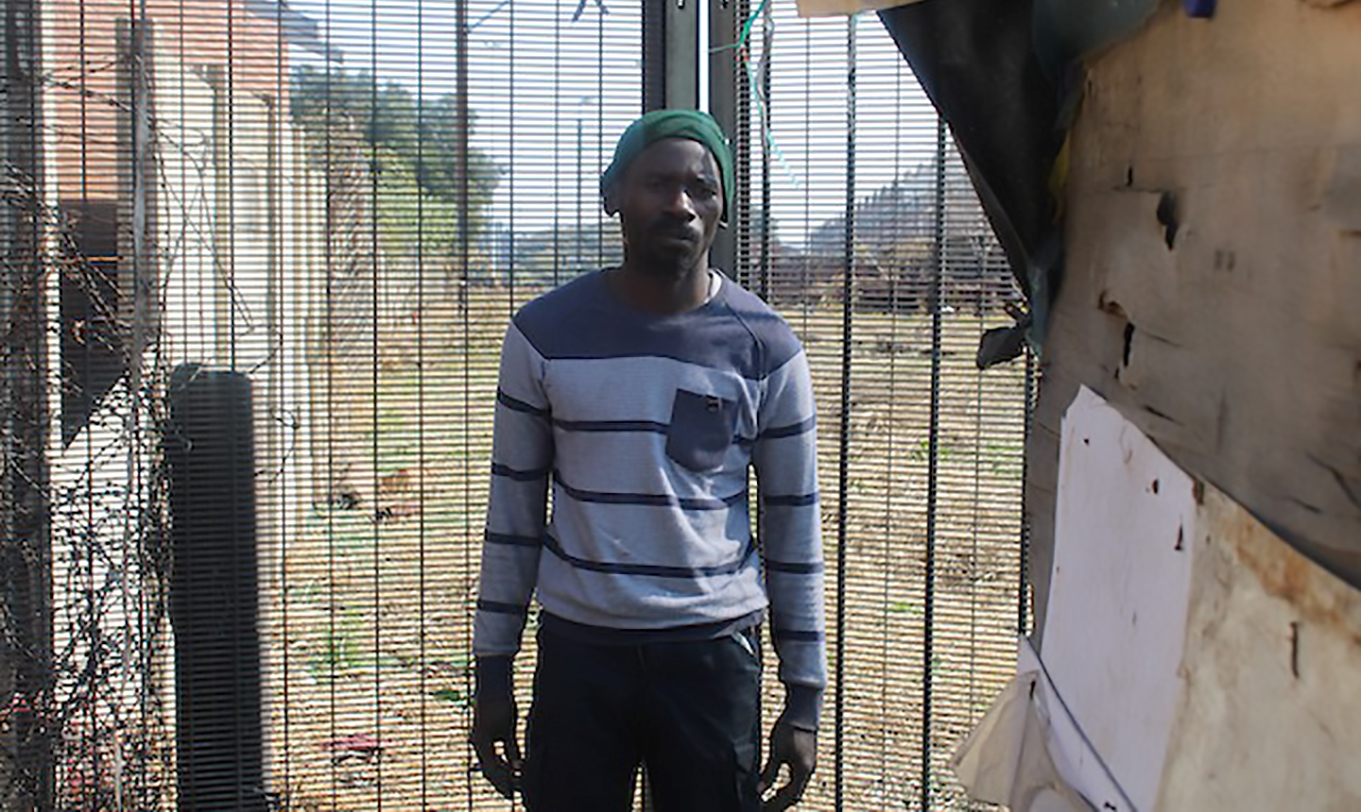 “Should they persist in moving people from here, we will have to finish the matter in court,” says Fanuel Mibota, who lives in a shack next to the the Prasa fence along the railway lines in Braamfontein. (Photo: Kimberly Mutandiro)

Some people have been living on the Braamfontein site for over two decades.

On a hillock known as Entabeni, next to a fence along the Braamfontein railway line, about 50 people live on railway land. They include women and children. Some stay in a dilapidated brick building, others sleep on cardboard huddled together outside, some have shacks. Several people in the community say they have lived here for over 20 years.

But they have now been given notice by the Passenger Railway Agency of South Africa (Prasa) to move and make way for an extended fence. They say the current fence was built while they were already living on the land.

Other people have tried to move on to the land, but the group has resisted such attempts, they say.

Nhlanhla Khumalo, a community representative, said Prasa put up notices telling them to vacate, but “without a single person’s name on them”. The occupiers say nothing was offered to them in terms of alternative land or accommodation.

For years Entabeni has been a place where they have been able to live for free while staying close to the inner city where they can earn a living. During the day, most of them go waste picking, collecting recyclable material which they store in a yard at Entabeni. In the evenings, the small community sits around a cooking fire and they chat before retiring for the night.

Now they worry about losing their home and livelihood if Prasa evicts them.

Getrude Shumikazi Nyongwana says she has been recycling for 24 years. She is looking forward to turning 60 next year when she will be able to collect an old age grant.

She says she has many fond memories at Entabeni, where she has raised her three children. Two of her children are now living on their own at nearby Bekezela College. Remaining with her is her last born, Pheliswa, who recently got a scholarship and commutes from their home at Entabeni to college during weekdays. On weekends, Pheliswa helps her mother with recycling to make money for the extra things she needs.

“This place may look like nothing to other people because we have no toilets or electricity. But to us it is everything, it is our home. The best thing is I am able to scrounge around for recycling material and earn a living right here in the city,” says Nyongwana.

“If they move us from here, will we go to where we can both live and earn a living at the same time. My daughter is now in college and we need every cent that we can make,” says Nyongwana.

She and a few others lost their ID documents in a fire that ripped through the place six months ago.

“All we want is to continue living peacefully as we have done all these years,” she said.

John Chivanza lives in a room next to Nyongwana, and has been here for 20 years. He used to do recycling and now gets work as a security guard. His family from Mpumalanga sometimes come to visit.

“Rent here in Johannesburg is expensive. Living here helps us because the cost of living is high and the money I earn doing security is little. If they move us, will they be able to provide us with another place to live? If not, they should leave us be,” said Chivanza.

Fanuel Mibota, who lives in a shack next to the fence, says the community does no harm, and if anything they help Prasa. He points to the fence. “It does not have a single hole in it,” he says.

“Should they persist in moving people from here, we will have to finish the matter in court,” he said.

Prasa spokesperson Bathabile Stella Mbhele said: “The City is in talks with Prasa to try and get alternative land to relocate the evictees.” DM