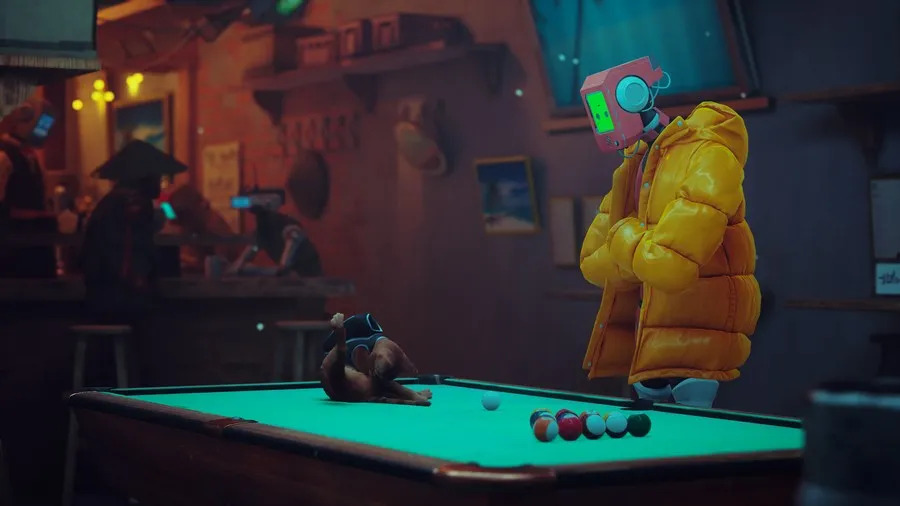 Play as a lost little cat exploring a mysterious cybercity in Stray, a new indie adventure from BlueTwelve Studio, published by Annapurna Interactive. Here’s what we thought of this highly anticipated release for PlayStation and PC.

On paper, the first effort from French developers BlueTwelve Studio, backed by publisher Annapurna Interactive, was going to be a largely on-rails experience that coasted in on player goodwill generated by its feline protagonist. Like a typical smart but lazy student who knows they don’t need to study to pass, the game would rest on its concept, tick the expected boxes and that would be that. A good little popcorn title for everyone to consume and move on.

Having finished the game, though, this writer is pleased to report that even without being catnip for cat lovers, Stray is a strong adventure game, cerebrally satisfying and poignant. It’s also one of the most visually sumptuous indie releases to date, presenting its unique world in intricate, lovingly crafted detail.

If you still need a synopsis for Stray at this point — i.e. you aren’t among the 50% of gamers worldwide who apparently already played it en masse — you control a little ginger cat separated from their feral colony while exploring some overgrown ruins. The result is that you find yourself in a long-forgotten cybercity deep underground and divided into ascending tiers.

There’s no sign of “the Soft Ones” (AKA humans) in this place, but there are plenty of humanoid robots resigned to spending eternity in a murky world where a swarming enemy known as Zurks (little cyclops turkey things) are consuming flesh and metal alike, and the authorities brutally enforce the status quo. Fortunately, our four-legged hero has an ally in the form of small flying drone, B-12, who also wishes to escape — along with other rebel robots.

In terms of gameplay, there’s the expected platforming and puzzle solving associated with the adventure genre, some action sections and even stealth levels, where a cat’s propensity for cardboard boxes comes in handy.

That’s one of the things Stray does exceptionally well: taking real-life feline behaviour and integrating it with gameplay staples. At no point does the cat slip into anthropomorphised Pixar mode, for example, which no doubt would have been more convenient for the narrative. You’re playing as a real-world cat, and their feline size, speed and nimbleness is key to advancing in Stray — getting to and through areas nobody else can reach.

Then there’s the additional flavour of being able to do typical cat things like rubbing against legs (sometimes tripping people up), running on keyboards, clawing furniture, playing with any ball-shaped items that cross your path, and sleeping on whatever and whoever you want. One of my favourite actions was simply to meow whenever close to robots, and watch how their facial screens respond. Like the player, these lanky machines can’t resist the Stray’s charm. And they have their own idiosyncratic appeal.

While B-12 is around to translate the robots’ garbled sounds into readable text, there is no conventional audible dialogue in the game. BlueTwelve Studio makes you care for its cast (and you will care for them a lot!) solely through excellence in character design and animation.

Just as you become invested in the characters, you’ll also become immersed in the game world due to its level of detail — and how impossibly good it looks. There are many indie games made by small teams that achieve a striking and memorable visual style, but that aesthetic is often stylised. Stray, somehow, sits at the level of next-gen graphics showcase. Every level of its cybercity is different, with a particular standout being the dazzling but dystopian Midtown. Basically, Blade Runner meets Shinjuku, Japan, its towering neon front is paired with gloomy, grubby back streets, depressing utilitarian apartment blocks and digital wanted posters, all reflected in wet walkways. It’s stunning, and my experience was that it runs well apart for some juddering in the final act.

For the record, Stray was officially announced as being a six- to eight-hour experience, although the reality is more like five hours. A comprehensive playthrough leans closer to the six-hour mark. Meanwhile, there’s even an achievement to complete the game in two hours if you want to know how quickly it can be done.

That said, detours in the surprisingly vast, open hubs are definitely recommended. Apart from the visual Easter eggs that drive home the point of this being a robot world, when you seek out the “collectible” locations associated with B-12’s memories, you flesh out the setting’s backstory. Stray has a lot to say about our own destructive, repeating patterns of behaviour, and when it’s time to let go of the past.

If there is any gripe to make about Stray, it’s that while the platforming is top-notch, the puzzle aspect isn’t quite as tight. It’s one of those games where you find yourself gathering items well before you know why you need them. Later levels also feel spatially bigger, but there’s less to do in them than in the arrival area of the slums, which contains optional side quests. Perhaps developer plans had to be dialled back, or it was a conscious design choice to focus players on the primary mission. Either way, you miss having a reason to scamper along ventilation shafts, and hop across balconies and air conditioning units to explore every nook and cranny.

Still, Stray isn’t short on ambition or achievement. What could have been a one-note easy win is something far more, and its level of accomplishment is impressive. Come for the cuteness; stay (or Stray) for the all-around fulfilling experience.

Stray is playable on PlayStation 4 and 5, as well as PC through Steam. It’s also available to PlayStation Plus members on the Extra tier and above. DM/ ML

This story was first published on Pfangirl.com.