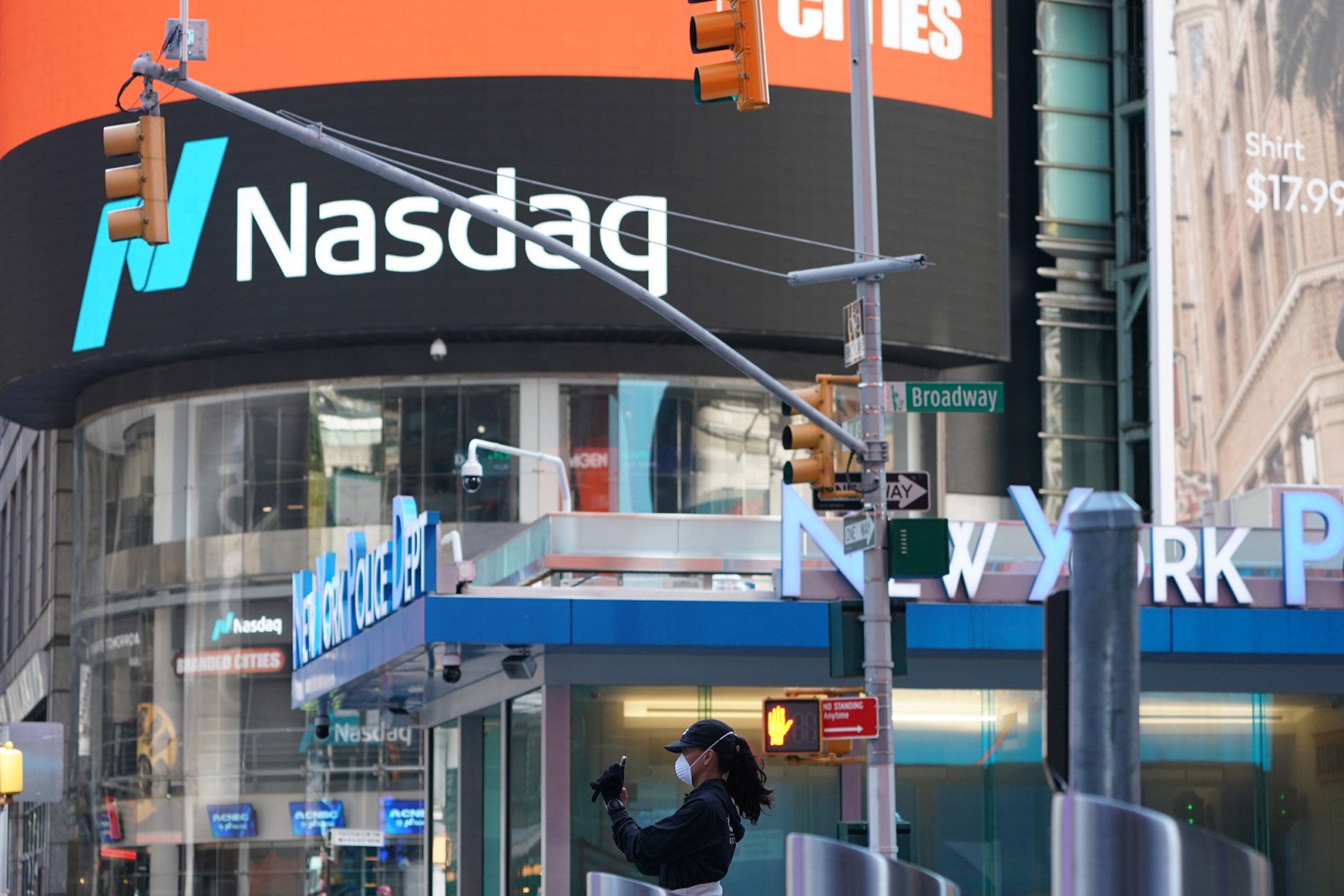 A woman takes a photo near the Nasdaq Marketsite in Times Square, in New York on 24 March 2020. (Photo: EPA-EFE/Bryan R. Smith)

Nasdaq 100 contracts added more than 1% after the US stock market hit a seven-week high on Thursday. Amazon jumped over 13% in extended trading, while Apple also advanced, after their revenues beat estimates.

But Asian bourses were more mixed, hampered by a decline in Hong Kong and hesitant performance in China. Traders were parsing a downbeat economic growth assessment from China’s top leaders at a key meeting and a lack of new stimulus policies.

Treasuries trimmed a rally that left the 10-year yield close to its lowest level since April. Bonds jumped in the Wall Street session on data showing a second consecutive quarterly contraction in the US economy, which bolstered the view that inflation will cool and that the Fed will become less aggressive.

A dollar gauge was steady, oil topped $97 a barrel and gold dipped. Bitcoin slipped back after breaching $24,000.

Global shares are on course for a second weekly advance, paring this year’s rout to about 16%. The risk is that the recent bout of optimism eventually gets a reality check if inflation stays stubbornly elevated, leaving interest rates higher than investors would like amid an economic downturn.

“At some point, the Fed will pivot policy and that should be better for risk markets, but in the meantime, they’re so bent on quelling inflation that we prefer not to buy the dip here,” Thomas Taw, head of APAC iShares Investment Strategy at BlackRock, said on Bloomberg Radio.

Second-quarter US gross domestic product fell an annualised 0.9% after a 1.6% drop in the first three months of the year. Back-to-back quarters of decline define a recession in most parts of the world, but in the US it’s not official until economists at the National Bureau of Economic Research deem it so.

Swaps tied to Fed meeting dates anticipate a peak in the fed funds rate of about 3.25% around year-end, less than a percentage point above its current level, followed by reductions next year to shore up growth. Such pricing is a major bone of contention for market participants.

“Market pricing is overdone and the terminal rate should move closer to 3.5%-3.75%” as inflation remains too high amid strong labour market and wage trends, Priya Misra and Gennadiy Goldberg, strategists at TD Securities, wrote in a note.

Elsewhere, a call between US President Joe Biden and his Chinese counterpart Xi Jinping underlined bilateral tension even as the leaders told aides to plan an in-person meeting.