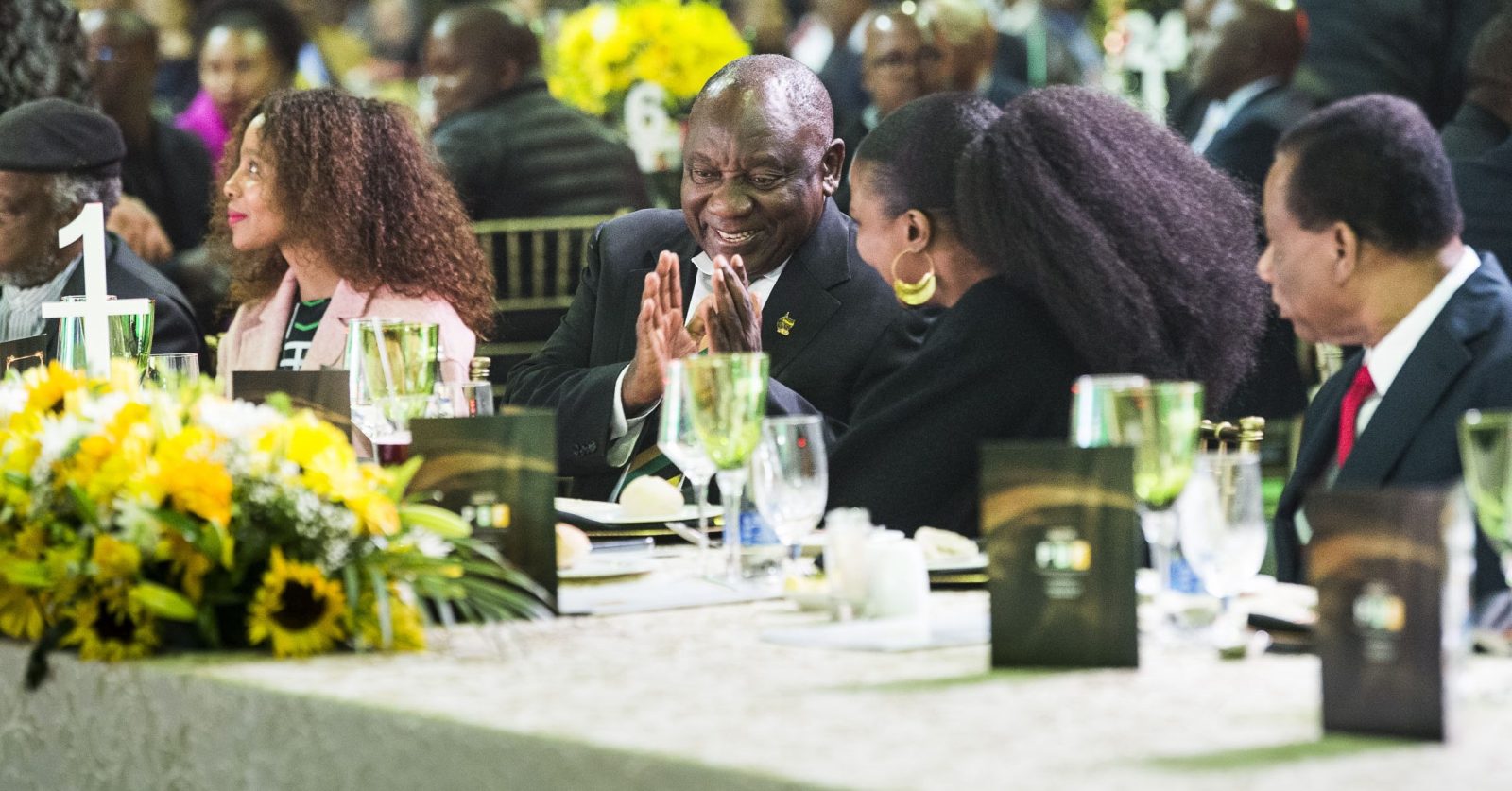 ANC president Cyril Ramaphosa seated at the main table where the Presidential Gala Dinner took place ahead of the opening of the National Policy Conference. (Photo: Supplied)

Despite seats being advertised from R5,000 to R20,000 the gala dinner was almost cancelled through a lack of interest.

There were many empty seats and few frills at the ANC’s Progressive Business Forum (PBF) gala dinner in the Nasrec Centre on Wednesday night, where the Motsepes again emerged as the big spenders.

Businesswoman Bridgette Motsepe forked out to pay the titanium price for six seats at the President’s table at the dinner, traditionally held as a fund-raiser ahead of mega-big party gatherings, such as the national policy and elective conferences, and its annual 8 January birthday celebration.

The seats were advertised for R200,000 each, but Motsepe herself didn’t take up any of these.

Instead, she doled out one of the seats to advocate Dumisa Ntsebeza, who traditionally has kept an arms-length relationship with the ANC, and Duma Boko, also an advocate and head of Botswana’s main opposition party, the Umbrella for Democratic Change.

Patrice Motsepe, who has often been the main purchaser of seats on these occasions, wasn’t present himself, with some speculating that it could have been due to his commitments as president of the African Football Confederation.

Those who paid the R165,000 per seat that it cost to be at deputy president David Mabuza’s table next to the main table got a raw deal, as Mabuza didn’t show up because his drivers collided with each other in Midrand on their way to pick him up earlier in the evening. Guests at that table got Baleka Mbete instead, former National Assembly Speaker, ANC chairperson, and deputy president (she was one for a few months at least).

The other seats cost between R15,000 and R95,000, depending on whether you could afford an “ANC deputy minister or MEC and another distinguished guest”, a minister or one of the two remaining ANC top six officials, chairperson Gwede Mantashe and treasurer-general Paul Mashatile.

Tables with no politicians went for a mere R5,000 and R10,000 (the latter includes a distinguished guest).

Ramaphosa arrived at the dinner from “a good day in the office” after Banyana Banyana, fresh from their Africa Women Cup of Nations victory in Morocco, visited the Union Buildings. Perhaps mindful of the power cut that interrupted his speech at the 8 January gala dinner in Limpopo earlier this year, Ramaphosa kept his speech to only 30 minutes, and business-like.

The closest he came to mentioning the problems anticipated at the upcoming policy conference was about the need for “strengthening our own organisation”.

He also promised that the party would discuss the findings of the state capture commission chaired by Chief Justice Raymond Zondo “as part of our effort to correct the mistakes that had been made and to restore the ANC as a credible, ethical and popular entity of fundamental change”.

He said the party’s policies and programmes depend for their success “on an ANC that is united in principle, as well as in action,” and that is rooted in the society.

Mantashe, in a private conversation, mentioned that the anticipated debate about the party’s step-aside rule will be assigned to a commission to avoid it from dominating the policy conference.

Unlike on previous occasions, where former president Jacob Zuma told businesspeople that their tickets constituted “an investment in the ANC” which would bring returns for their businesses, Ramaphosa told diners that the evening wasn’t about raising funds, but rather about engaging businesspeople about their policy ideas.

Just before his no-frills introduction of Ramaphosa, Mashatile revealed that the dinner was almost cancelled due to a lack of interest, but a last-minute push by Progressive Business Forum co-ordinator Sipho Mbele eventually made it possible.

Nothing could, however, save the business breakfasts traditionally held at the start of each conference day to brief businesspeople and diplomats about the progress on policy issues.

Tickets were sold via Ticketpro, to keep things confidential, and Mbele refused to disclose who the buyers were.

Another ANC staffer said it would be difficult to know who bought the tables as some businesspeople might have paid for seats but stayed away to avoid media scrutiny. For this reason, the live streaming was also kept tight.

This is in contrast to a few years ago when companies were happy to have their banners displayed in the hall, or their names printed on the back of the programme. Now it’s all low-key, and it’s difficult to say if the seats that remained empty — about a quarter of the estimated 500 available — were because they were unsold or because those who bought them couldn’t find bums to fill them.

Amongst the attendees was a lobbyist seeking the ear of a minister about the difficulties his family members — residents of another African country — were experiencing in getting visas.

While a decline in the ANC’s electoral support and some disillusionment over Ramaphosa’s leadership after the Phala Phala allegations might have had something to do with the scant attendance, new rules on party funding might also have had the funders hesitant.

Read our timeline here of the Phala Phala scandal:

The Political Party Funding Act, promulgated last year, put a funding cap of R15-million per year per party on donors and declared that everything over R100 ,000 has to be declared publicly.

It’s possible, however, that the ANC has struck a loophole in the legislation for now.

Mbele was swift to tell Daily Maverick that the selling of tickets was for dinner, not fundraising.

Robyn Pasensie, from My Vote Counts, says “this is a bit of a grey area” but, as the law currently stands, the ANC is “providing goods and services” and is unlikely to have to declare these funders for now.

ANC staff members picketing outside the event about not getting salaries for two months due to the party being short of donations was a symptom of these new funding rules.

On the plus side for Ramaphosa, and those who invested good money to have a minister’s ear, the lights stayed on. DM

This article was amended following publication regarding reference to Dumisa Ntsebeza’s political affiliations.