For the sake of humanity on planet Earth, we must end t...

For the sake of humanity on planet Earth, we must end the war in Europe – and Putin’s reign 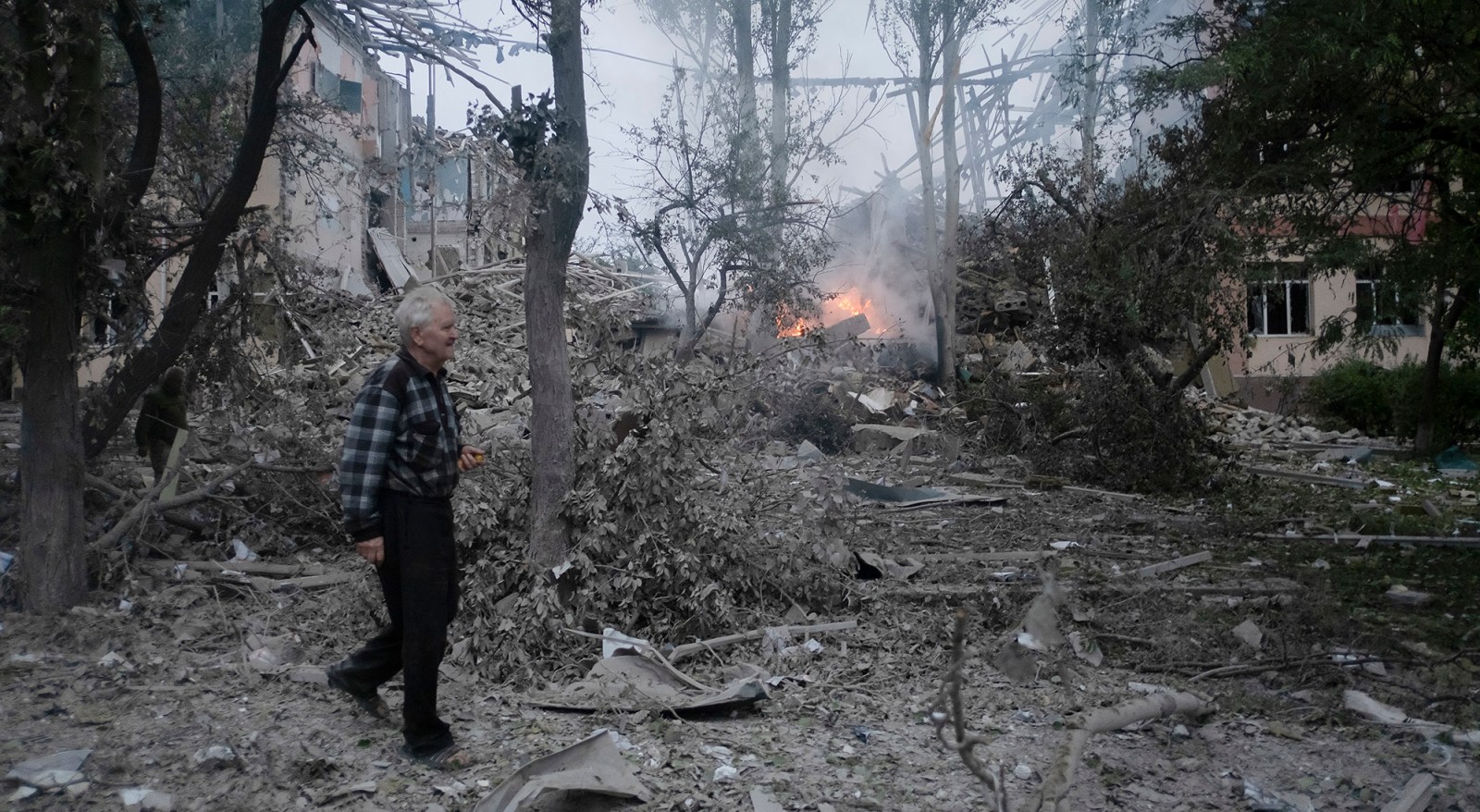 A man walks in front of a damaged school after a missile strike in the city of Kramatorsk, Donetsk region, eastern Ukraine, 21 July 2022. (Photo: EPA-EFE / George Ivanchenko)

The hope in the early days of the war was that the world’s leading economies would use this opportunity to shift from a dependence on fossil fuels and embrace renewable energy sources such as solar and wind. Instead, Western nations are seeking to make up for the loss of Russian fossil fuels by investing in non-Russian (including African) fossil fuels.

I am a climate activist from Moscow, pained by the death and destruction caused by my country’s invasion of Ukraine. The human consequences of Putin’s criminal aggression against the people of Ukraine are shocking to behold. His deliberate attacks on civilian targets can only be described as terrorism.

But the war’s effects aren’t solely felt within the range of Russian bombs and missiles.

The war has become a disaster for the world’s environment with the brunt of the impact felt, as always, in the Global South. It isn’t hyperbole to suggest that more war in Ukraine will lead to more climate change-intensified catastrophes like the KwaZulu-Natal floods of April.

Since hostilities began on February 24, the West has been attempting to wean itself from a dependence on the Russian oil and gas that funds Putin’s war machine. The hope in the early days of the war was that the world’s leading economies would use this opportunity to shift from a dependence on fossil fuels and embrace renewable energy sources such as solar and wind. Instead, Western nations are seeking to make up for the loss of Russian fossil fuels by investing in non–Russian (including African) fossil fuels.

UN secretary-general António Guterres rightfully called new funding for fossil fuel exploration and production infrastructure “delusional”. Our planet is headed for extinction unless we dramatically curb the burning of coal, oil, and gas. Scientists warn that limiting global warming to 1.5°C above pre-industrial levels will require immediate and deep emissions reductions on a global scale.

Wealthy countries made commitments at last year’s COP26 climate conference to spend significant sums – including $8.5-billion (R143.15-billion) for South Africa – to assist the developing world in transitioning to green technologies and protecting against the fallout of climate change. We must insist that the climate goals outlined in Glasgow not be cast aside in the war-induced rush to restart coal plants.

“Developed countries must continue taking the lead with ambitious action,’’ as your Environment Minister Barbara Creecy said during a climate dialogue in Berlin on 18 July. “The ultimate measure of climate leadership is not what countries do in times of comfort and convenience, but what they do in times of challenge and controversy.’’

I began my climate activism three years ago to alert the Russian public to the environmental danger menacing our world, a subject rarely discussed in political debate or covered in the Russian media. I was part of a small group of activists who sought to convince the Kremlin to reduce greenhouse gas emissions – Russia is the world’s fourth-largest emitter – and shift away from the incessant use of fossil fuels. Putin’s energy strategy is almost exclusively dedicated to the exploitation of oil, gas, and oil.

Then a violin student at the Moscow Tchaikovsky Conservatory, I staged single-person protests – the only kind that could be conducted without prior notification to authorities – on Fridays in Pushkin Square, the Russian counterpart of Greta Thunberg’s Fridays for Future movement.

I held up pieces of cardboard with messages like “For the Paris Agreement! Against the genocide of nature! Global heating equals hunger, war, and death.”

I was harassed, threatened, and detained a handful of times, including once for six days.

After the war in Ukraine began, my partner and I joined the protests and were briefly detained. My friends’ apartments were raided, their electronic devices seized. My job as a social media manager ceased to exist. We knew it was time to leave.

I am now in Berlin, where I continue to speak out. Yet the harassment has continued. A prosecutor in Russia has begun the process of stripping me of my citizenship, a bizarre and unprecedented move that would render me stateless.

But I will not be silent.

My goal is to end the war in Ukraine for its own sake but also to reverse the West’s renewed embrace of the most destructive of energy schemes. I want to see regime change in Moscow in the hope that an enlightened leader can step up and lead Russia into a green future.

I know it is a dream. But it is a dream I am willing to fight for. I urge all who care about our environment, all who worry about worsening climate shocks felt in lands a world away from eastern Europe, to raise their voices in opposition to Putin’s disastrous adventure in Ukraine.

Arshak Makichyan is a Russian climate activist now living in exile in Berlin.

For the sake of humanity on planet Earth, we must end the war in Europe – and Putin’s reign