‘I will run for President in 2024’, Central Karoo Mayor Gayton McKenzie says after 100 days in office 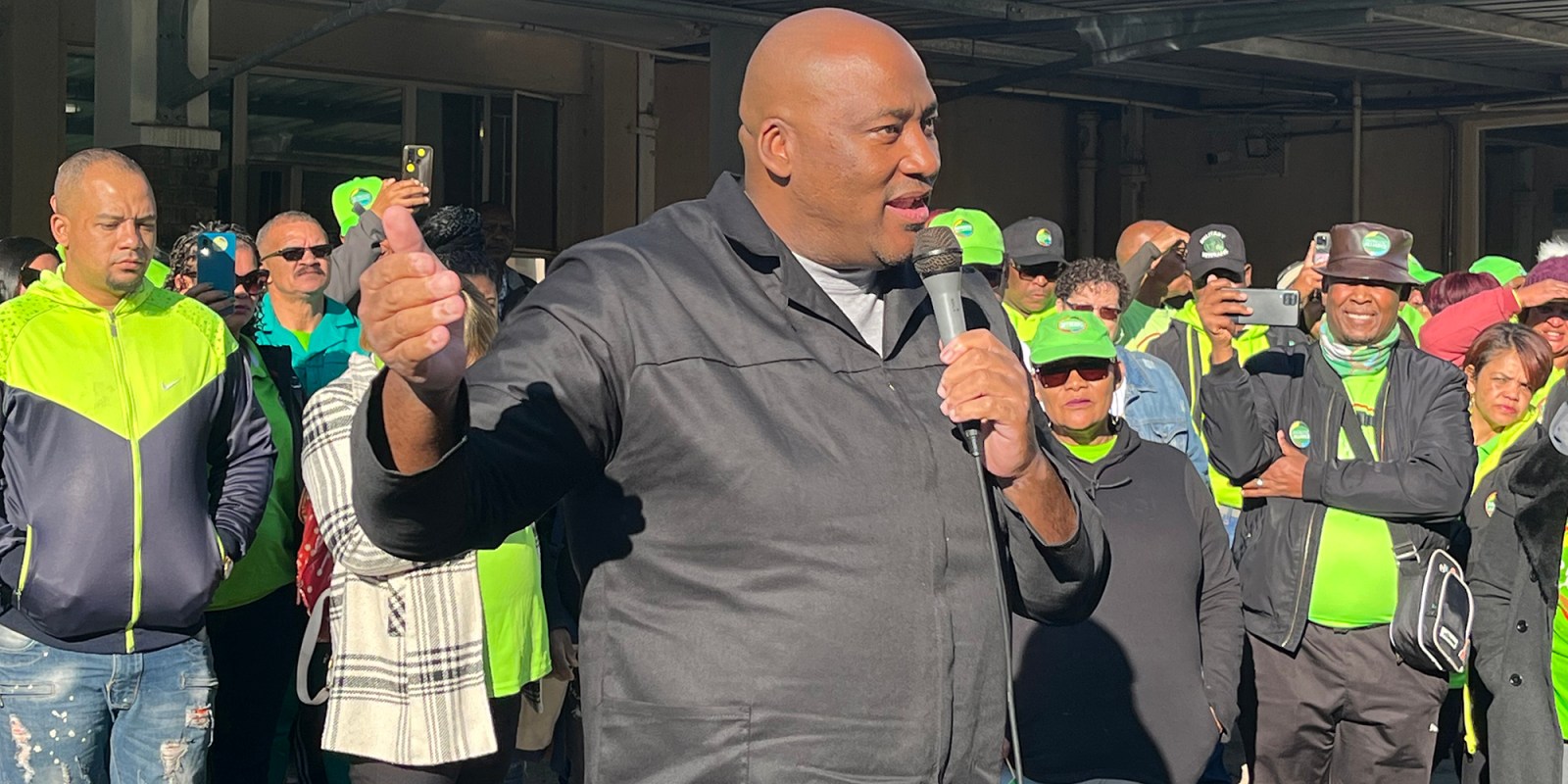 Patriotic Alliance leader Gayton McKenzie addresses party members outside the Central Karoo District Municipality offices in Beaufort West on Friday 22 July, just before he was due to start a site tour of projects he’s been working on during his first 100 days as mayor of the district municipality. (Photo: Suné Payne / Daily Maverick)

Gayton McKenzie gave himself 12/10 for his achievements as mayor of the Central Karoo District in his first 100 days — even though he was light on the details. He announced he would run for President in 2024, and offered his services (free of charge) ‘to fix Eskom’.

It’s a little more than 100 days since Central Karoo District Municipality (CKDM) Mayor Gayton McKenzie made several promises to fix the region. In the lead-up to McKenzie’s 100-day celebration, Daily Maverick spent time in Beaufort West, where the municipality’s council is based.

McKenzie, who was jailed as a teenager for a failed bank robbery decades ago, went on to become a motivational speaker, author and businessperson. He founded the Patriotic Alliance (PA) in 2013 with his friend Kenny Kunene – with the pair acting as president and deputy president, respectively.

He made headlines in April 2022 when he was appointed as a councillor of the Laingsburg municipality, where he was seconded to the district council.

McKenzie lives in Beaufort West, but has homes in Johannesburg and Cape Town. His party, the PA, is in an alliance with the ANC and the Karoo Democratic Force (KDF) to govern the region via the district council and local municipalities.

During a council sitting to elect a mayor after Mitchell Smith resigned, only McKenzie was nominated — no opposition candidate was put forward.

The district includes Beaufort West and Laingsburg municipalities, which were identified as troubled by the Auditor-General’s 2021 local government audit outcomes report.

During his mayoral speech from Beaufort West, McKenzie made big promises for his first 100 days: he would eradicate the bucket system and fix the town’s public swimming pools.

Daily Maverick was in the area for the build-up to Friday’s celebration. Read more in Daily Maverick: “Beaufort West – where time stands still, dangerous rocks are born and service delivery is dying”

An official celebration took place on Friday at the Bird Street swimming pool in Beaufort West, which has been refurbished. The municipality has three pools: one in Bird Street, one in Kwa-Mandlenkosi and another in Rustdene.

During a media tour before the celebration, journalists were taken to the refurbished pool in Kwa-Mandlenkosi, which had been closed in March 2020 at the start of the Covid-19 lockdown.

The media tour featured all developments in the town since McKenzie took the mayoral chain, including a bakery, tar factory, aluminium factory and clothing factory.

Although McKenzie had promised to fix the town’s swimming pools, the pool in Rustdene was still closed. It was closed five years ago because of vandalism and has not been fixed yet. Through a fence, Daily Maverick saw a dilapidated building, broken windows and overgrown grass.

Friday’s celebration was attended by coalition partners and about 1,000 PA supporters from across the country. Also in attendance were McKenzie’s friends and investors — such as billionaire Rob Hersov, Karoo politics strongman and former Beaufort West mayor Truman Prince, and, of course, Kunene.

During the celebrations, KDF president and council Speaker Noël Constable said the 100 days celebration was an official government event, approved by the council on Thursday 21 July.

No opposition members were present. The DA has been vocal about McKenzie’s appointment, with News24 reporting that DA Western Cape interim leader Tertius Simmers had described the appointment as “political thuggery”. More recently, the DA in the region has been vocal about attempts by McKenzie to disconnect Beaufort West businesses’ electricity after alleged non-payment on bills.

‘More than what I promised’

During his speech, McKenzie said: “We have kept our promises”.

He praised Kunene and Hersov, specifically for their role in creating employment and fixing basic needs, including the eradication of bucket toilets and repairing potholes.

According to the Central Karoo’s Community Survey 2016, 0.4% or 274 people had no access to toilet facilities. The municipality’s 2020/2021 annual report does not provide a breakdown of where the bucket toilets are located or details of plans to fix them.

When asked what he was most proud of during his term of office so far, McKenzie said, “The eradication of the bucket system.” He could not, however, give the number of bucket toilets eradicated, but said it was in “the hundreds”.

Daily Maverick could not obtain exact details of where the bucket toilets are in Beaufort West or the Central Karoo itself, despite searching through the annual reports of the municipality and the district municipality.

During his speech, McKenzie ran through the next phase of the region’s development. In the next three months, he said, the Central Karoo would:

Daily Maverick could not find any references to the creation of a suburb or plans for housing in the Beaufort West region in the 2022 budget speech, delivered in March 2022 by Simmers, now the Western Cape MEC for Infrastructure. (Housing falls under Simmers’ responsibility).

McKenzie repeated that fracking and mining would take place in Central Karoo:

To much applause from the crowd, 48-year-old McKenzie announced his intention to run for President of South Africa in the 2024 general elections.

Several party members wore T-shirts with McKenzie’s face and the words “#PAVISION24” and “Gayton McKenzie for President” on them. These slogans were also on several PA-branded taxis seen in the streets of Beaufort West.

McKenzie also made renewed comments on expelling foreign nationals: “Foreigners will go home if I became the President.” And: “When you are a foreigner legally here you must come with a special skill — you can’t do a job that can be done by a South African.”

McKenzie said he was offering his services as Eskom CEO as incumbent André de Ruyter was unable to deal with the “mafias” who operate in the diesel, petrol and transportation sectors and the unions.

Addressing President Cyril Ramaphosa directly, he said: “I am volunteering without a salary to fix Eskom for you… I have fixed the Central Karoo, I will deal with the mafias.” DM

This is part of a series of stories focusing on the Beaufort West municipal area.