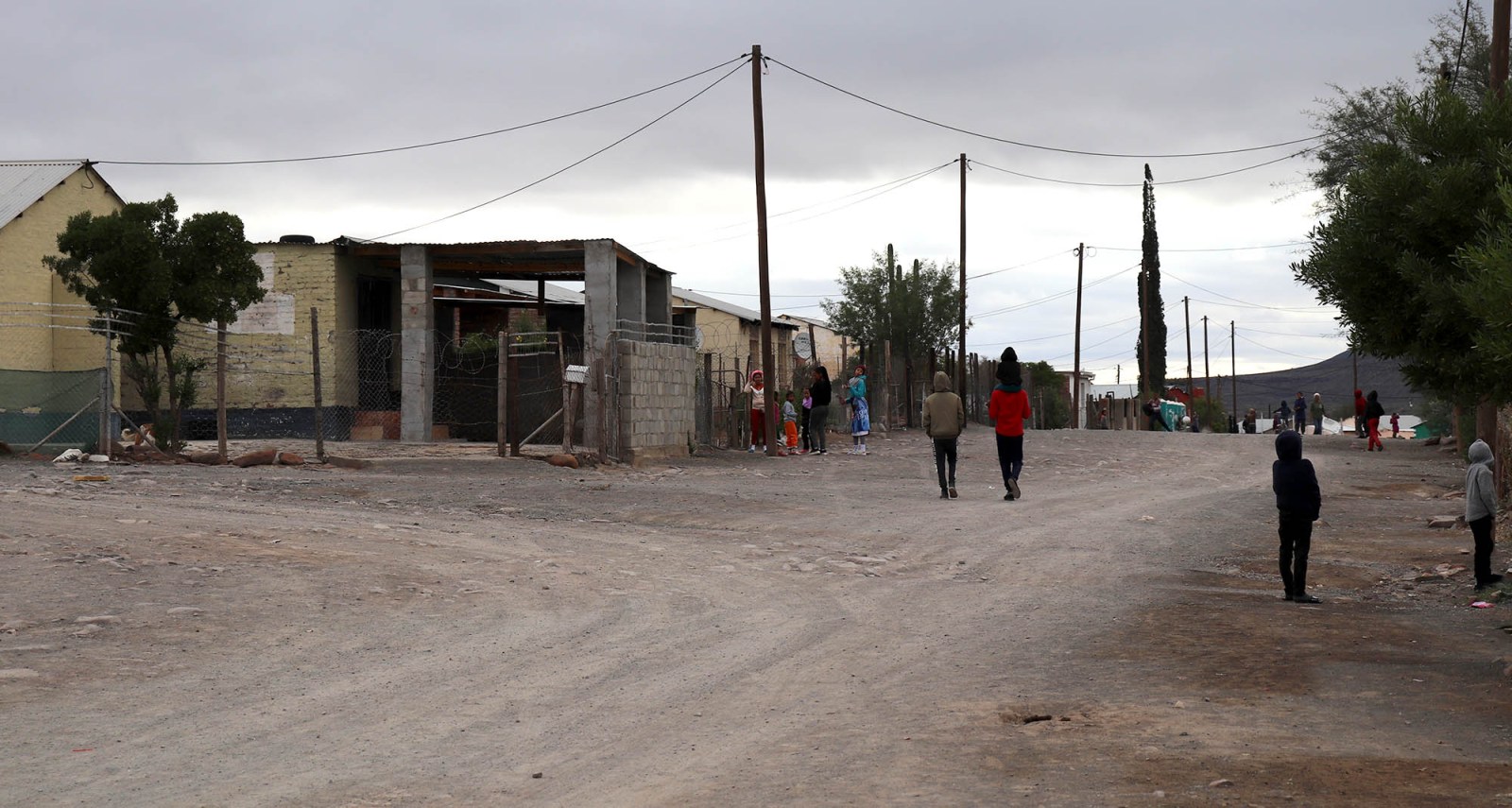 Early Wednesday afternoon in Beaufort West, where there are several children playing on untarred streets. School holidays are over and some schoolgoers have joined their friends in the street. (Photo: Suné Payne / Daily Maverick)

Beaufort West is usually a thoroughfare town for those driving between Cape Town and Johannesburg, but for those who live here, it’s a town they call home. Unfortunately, this home has many problems, mainly related to issues of service delivery. 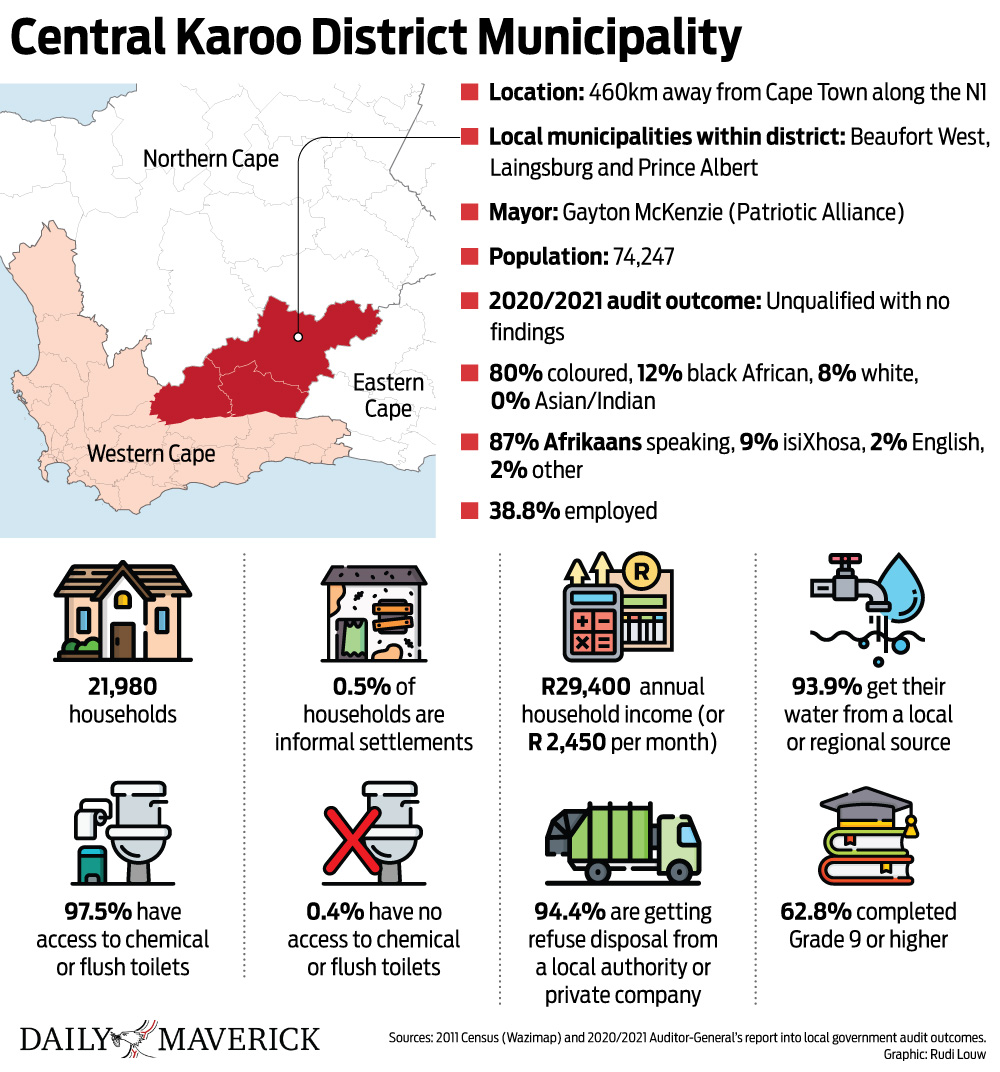 But for the people who live on the outskirts, it’s a different story. The suburbs where the poorest of the poor reside look as if they have been trapped in a time capsule since the dawn of democratic South Africa in 1994.

One such suburb is Nieuveld Park. Here, there are deep trenches in the gravel roads that are littered with large rocks that can cause serious damage to vehicles.

Residents were loath to speak about the political situation but spoke freely about service delivery issues.

After growing up in Beaufort West and moving to Cape Town, James Louw decided to move back three years ago.

“Nothing has been done; time stood still here while we watched on TV how development took place in other parts of the country,” he said.

Another problem, Louw said, is that the Beaufort West municipality places too much weight on developing the town and too little focus on the wellbeing of residents. For as long as this situation persists, the impoverished communities in Beaufort West will remain marginalised, he said.

On a lighter note, Louw said: “Nieuveld Park is known as a place where rocks are born. Massive rocks can be seen lying around every house and in the area … massive rocks are born after every heavy winter downpour. When we wake the next morning, we find new rocks lying next to our fences.”

For Michael Jacobs (31), who struggles with severe back pain after an accident which forced him to walk with a crutch, the bumpy gravel roads pose great danger.

“Just walking to the shop places a lot of strain on my back. I will be paralysed if I should lose my balance because of the largest stones piercing through the gravel,” said Jacobs.

Louw has been volunteering with an organisation that assists people living with disabilities. He said he was worried about physically disabled people such as Jacobs and how they have to navigate untarred roads and potholes to move around their community. He said he had approached mayor Thersia Prince about access for disabled people, including the possible creation of a Dial-A-Ride service.

At times, he said, “The water just goes off,” adding that ward councillors and the municipality failed to communicate with residents. “Nobody says when there is a problem … people always need to skel.”

In a town that is water-stricken, Jooste claimed burst pipes sometimes take three months to repair. “Our service is weak,” he said in reference to the fixing of broken or damaged pipes.

Garbage in the area hasn’t been collected for months and there are heaps of rubbish on every available piece of open field and even patches situated between houses.

When Daily Maverick visited the town’s poorer suburbs, the Nieuveld Park police station was derelict. In Mandlenkosi, where the town’s African population lived under apartheid, there was rubbish everywhere and the roads were untarred. The Gamka River flows through Mandlenkosi, but its water has turned green with algae in some places. Daily Maverick saw two horses drinking from the river, oblivious to the rubbish in and around it.

Newly elected mayor Thersia Prince (PA) sat down with Daily Maverick. She came into office just over a month ago and is still adjusting to life as the town’s youngest female mayor at 37.

Daily Maverick asked her about Louw’s queries about the town’s disabled community. “I’ve met some of the people who work with people living with disabled people and they raised their concerns — that’s in the process of being looked at,” she said. DM

This story is part of a series focusing on the Beaufort West municipal area.