Messing about in boats with dry aged fish

Messing about in boats with dry aged fish 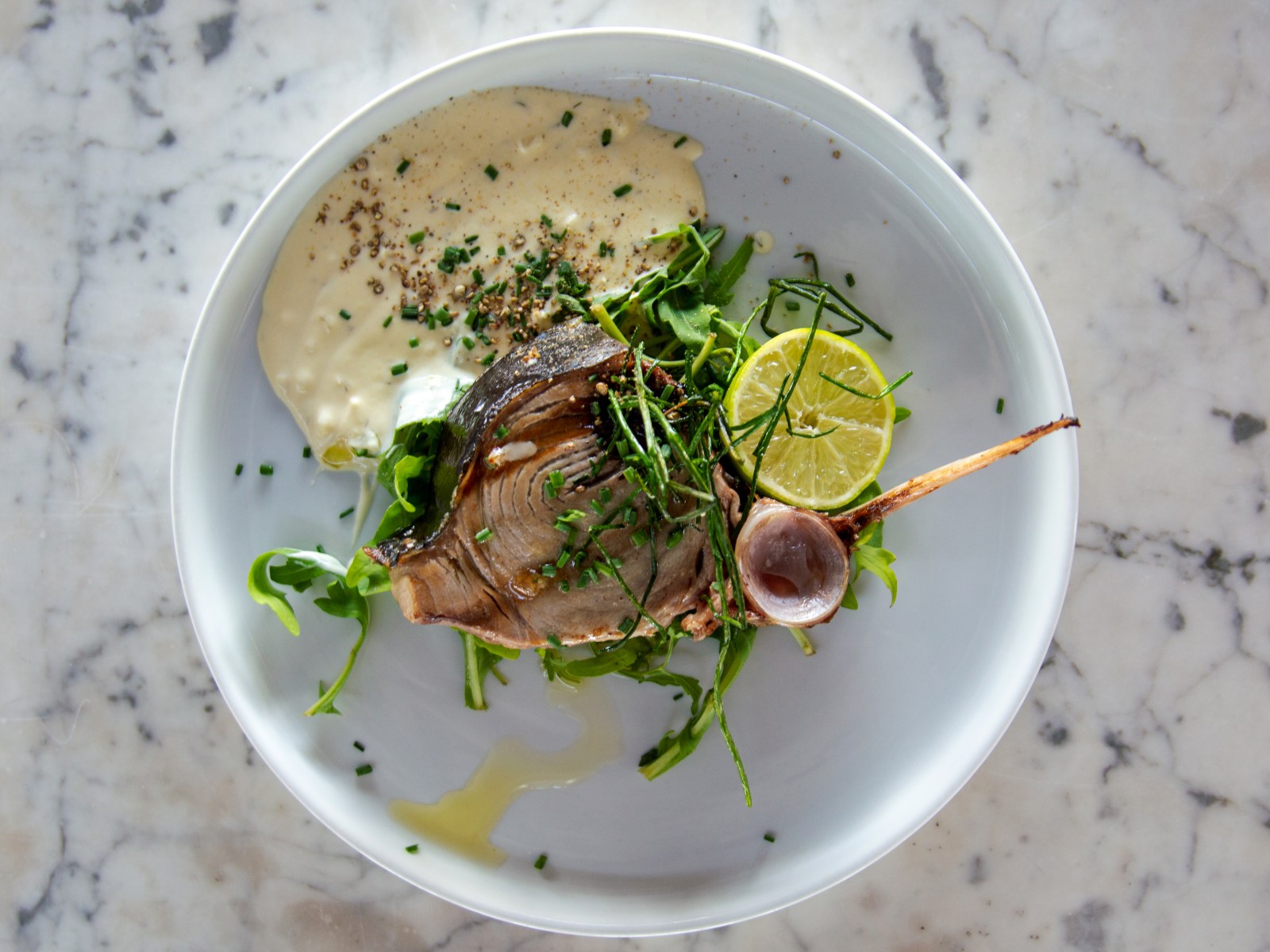 Dry aged tuna tomahawk on the bone can take on the characteristics of a fillet steak. (Photo: Supplied)

Controlling moisture when ageing beef is standard practice at butcheries and in steakhouses. A similar process can be used for fish, with comparable levels of tenderness and intensified flavour. Swordfish bacon, anybody?

Dry aged fish? No, it’s not bokkoms or fish biltong. During lockdown, Kurt Hill of Cape Fish began playing around with dry ageing fish, which is more art than science. Founded in 2012 by Hill and partner Kyle Nold, Cape Fish operated a commercial ski boat and sold yellowfin by knocking on restaurant doors. When they met the women who became their wives, they had to decide which road they wanted to take: fishing or trading. “So, for our sins, we decided to do the trading,” said Hill.

The Paarden Eiland-based business has grown from a bakkie in Hill’s mom’s garage to the smallest EU certified facility in southern Africa. Cape Fish is currently the only company exporting fresh tuna loins from South Africa into Europe. Countries include Germany, Norway, Sweden, Holland, Finland, Italy, a little bit of Spain, and Czechoslovakia; tuna offcuts are sent to a retail chain in the US. Here at home, posh supermarket brands are supplied, as well as top restaurants.

The majority of fish – hake, kingklip, tuna, yellowtail – comes from Cape Peninsula waters: Hout Bay or up the West Coast, Dassen Island way, which is about 55km from Cape Town and 10km west of Yzerfontein.

“Boats are contracted to fish for us. Tuna is very feast or famine; either there’s not enough or there’s an oversupply, and over the years we have adapted our business to become tuna specialists to offer maximum return for our fishermen,” said Hill. “We have two seasons every year, May to June, July and then October to December. When the water warms up in January, February, they swim away.”

With tuna reaching weights of up to 150kg – each! – reeling them in requires skill, technique and a lot of hard work. “We have always endeavoured not to go for the greatest volume but rather the best quality. We work very closely with our fishermen. When the fish come onto the boats they’re being handled as they need to be so as to offer the best possible prime product.”

The fish is gaffed in the head to avoid damaging the loin, and bled out under its pectoral fins. A pipe is stuck into the gills to flush the blood out. “The crucial thing is temperature,” said Hill. The fish are kept in a refrigerated salt water system on the boat.

All the effort of ensuring the best quality fish wasn’t much good during lockdown when restaurant customers were non-existent. “We started our online business while we tried to figure out what to do. That’s when we decided to hunt down the EU and get approved,” said Hill. The timing provided the opportunity to get everything in place to be up and running in 2022.

“But also during lockdown I wanted to push the envelope, play a bit and experiment.,” said Hill. For some time he’d been following Josh Niland on Instagram – “the Australian who pioneered dry aged fish charcuterie”.

Amazon’s description of Niland’s status is pertinent: “Niland’s multi-award winning The Whole Fish Cookbook is the bestselling cookbook that has changed the way we think about fish. Jamie Oliver called Josh Niland one of the most impressive chefs of a generation and Yotam Ottolenghi voted the book one of his favourites – ever.”

Hill bought his dry agers and began messing about with tuna, yellowtail, swordfish and marlin. “Dry ageing is essentially the control of temperature, humidity, UV and air movement – which creates static energy which has heat in it,” explained Hill.

“What it does is create a peak of flavour. The piece of fish is going to come into its prime and if it goes over that it’ll start getting a fishiness to it. Each piece of fish is different, which is what makes dry ageing an art rather than a science. Each will age at a different pace because of its water content, its fat content, its thickness, and its weight.”

The tomahawk tuna steaks are nice big cuts, said Hill. He recommends salt and pepper and a bit of butter. “You cook it like you’d cook a steak, just less time and slightly more heat to get a nice crisp on it. I guarantee if you close your eyes and rub your finger on it and lick your finger, you’ll think it’s a piece of fillet steak.”

Yellowtail cutlets are cut like chops with a bone, which presents beautifully, said Hill. “Swordfish bacon – that’s very cool. The belly is generally tough and chewy so what we do is cure it, we smoke it, and we hang it. After a couple of weeks you slice it really thin and cook it in a pan like bacon. It has enough natural oil so you don’t need to use butter. It smells like bacon and when you eat it it has bacon start with a swordfish/ocean finish. It sounds weird but it’s really cool.”

To be crystal clear, dry aged fish is not fish biltong, or bokkoms. You treat it and cook it like you would any other piece of fish (do not overcook it, a sear is enough for tuna). “Another cool thing,” enthused Hill, “is because you’re taking the moisture out of the fish, when you put it in the pan it never spits water. If you like crispy salmon skin, you don’t get it crispier than a dry aged fish.”

Cape Fish encourages its fishers to use the Japanese method of ikejime, which maintains the quality of the fish, extending initially from tuna and now yellowtail too. A spike – imagine a car aerial – is inserted in the fish’s head and along its spine. This causes immediate brain death which prevents any further muscle movement so the fish doesn’t flap around and bruise itself. “It gives a far better shelf life and far better product overall, as the muscles remain firm and keep their shape,” said Hill.

Then, the yellowtail’s scales are cut off rather than scraped. No pockets to hold water, and therefore no bacteria. “When you cook that yellowtail and you put the skin down in the pan… man, it goes so crispy and golden,” said Hill.

Yellowtail caught off Cape Point ages for about seven days; from Dassen Island they’re fattier so they go 11 days. Yellowfin tuna hangs for about 12-14 days, and the belly of the oh-so-desirable bluefin, which is caught in winter, is transformed into otoro (the fattiest part of tuna), ageing for 21 to 30 days. Customers include Obi in Long Street, Cape Town and Kyoto Garden Sushi in Gardens. “Or I take it home and eat it myself,” said Hill. “Let me tell you, that is for me the holy grail. Nothing I’ve ever eaten compares.”

When you order your dry aged fish it’s packed in absorbent liners, wrapped in waxed brown paper, which is labelled or written on with a black marker – true fishmonger/butcher style. There’ll be no leaking juices and no mess in your fridge. But do not freeze it. Cook it the same or next day for the best results. My verdict? I don’t cook fish at home for reasons best known to my subconscious so there’s not much basis for comparison, but the tuna and yellowtail I made were both deliciously full of flavour. Ten out of 10, would do it again.

You can shop the range from the small retail space at Cape Fish in Paarden Eiland, or order online. Delivery is offered in Cape Town and surrounds, and by surrounds that means not over the mountains. DM/TGIFood

The writer supports The Gift of the Givers Foundation, the largest disaster response, non-governmental organisation of African origin on the African continent.