Conservationist vs DD Mabuza: Threats ‘likely to escalate’ as resumption of trial looms 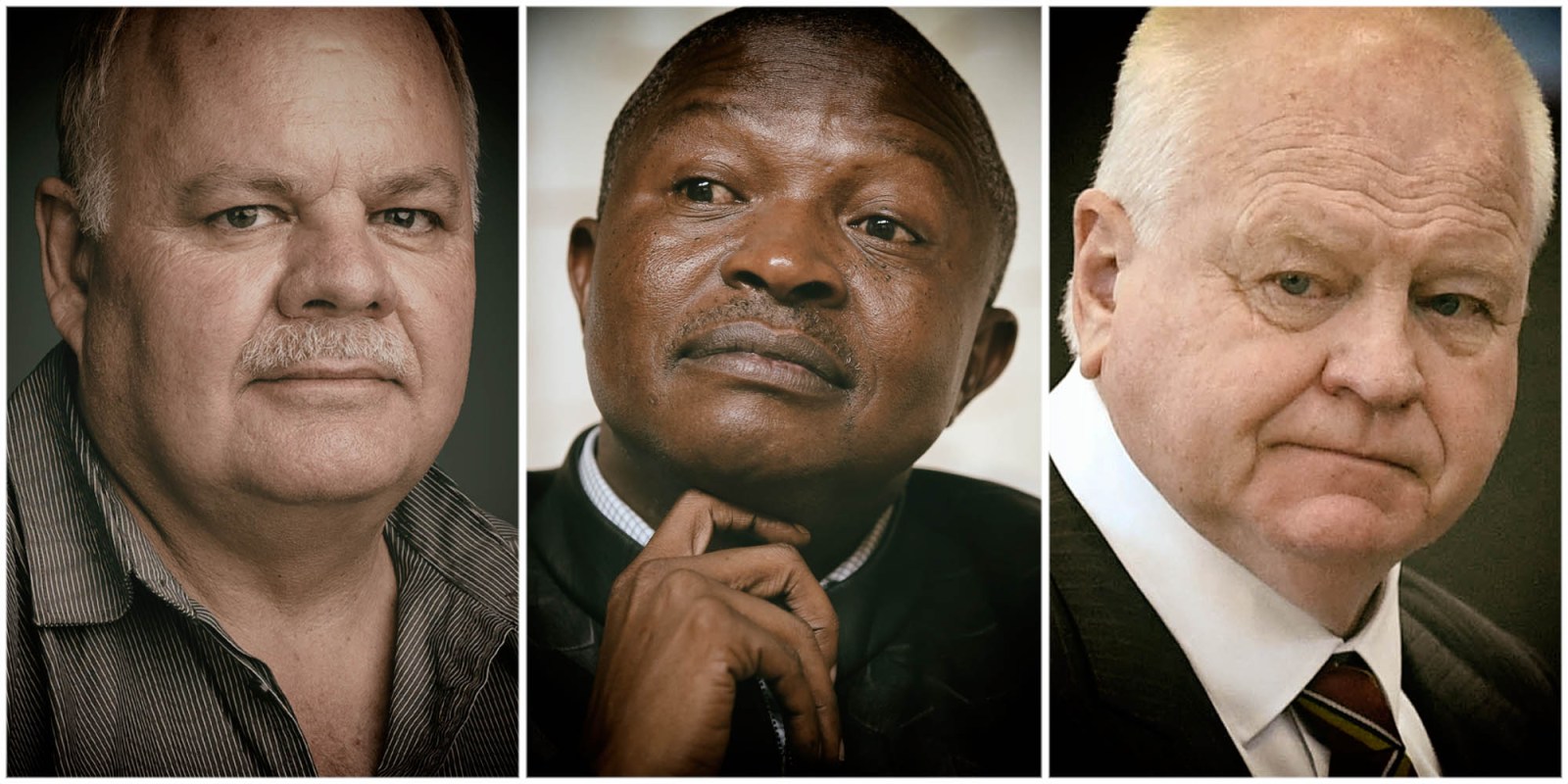 On 9 June 2022, when they were meant to be representing Deputy President David Mabuza and a host of government entities at a pre-trial meeting of the Pretoria High Court, senior counsel Mike Hellens and Dawie Joubert were in Dubai with the Guptas. But, according to a letter to the state attorney written by conservationist Fred Daniel’s lawyers, this was not the major concern. Security issues, in the days leading up to the resumption of the trial, were paramount in the missive.

This nice compliment was recently paid by Peter Bruce, former editor of Business Day, to Mike Hellens and Dawie Joubert. Bruce’s regular column was focused that day — 7 June 2022 — on the arrest in Dubai of Rajesh and Atul Gupta, who had just been hauled into custody on the basis of an Interpol red notice.

The columnist’s lament, given that the Gupta brothers had “helped to rob the country blind”, was that South Africa’s prosecuting authority and justice department did not have the chops to “seize the opportunity”. Hellens and Joubert, he suggested, were more than capable of springing the brothers free.

At issue, of course, was the role that the Guptas had played — aided and abetted by former president Jacob Zuma — in hollowing out the organs of the South African state and pilfering hundreds of billions in public funds.

Like Daily Maverick’s Rebecca Davis, who memorably referred to the issue of extradition as a “very delicate diplomatic egg dance”, Bruce was concerned that the legal environment was tailor made for the likes of Hellens and Joubert. With such an abundance of loopholes and technicalities for the pair to work with, his advice to us was to lower our expectations.

What Bruce couldn’t know, however, was that two days later, when Hellens and Joubert were scheduled to attend a meeting called by Judge Cassim Sardiwalla of the Pretoria High Court, they would still be in Dubai with the Guptas.

Instead of representing their pre-booked clients, who happened to be Deputy President David Mabuza and a host of interlinked government entities, the advocates would send juniors in their place. In a transcript of the meeting obtained by Daily Maverick, one of these juniors would explain to the judge that Hellens and Joubert “did not receive timeous notice”.

So how, we wondered, might our deputy president have felt? Was it possible that he considered himself “jilted” — left on the back-burner for a more high-profile case?

If the letter sent by DLBM Attorneys to state attorney Nelson Govender on 6 July was any indication, the answer may have been that Mabuza wasn’t particularly bothered.

DLBM, which through the course of the protracted trial had been acting for conservationist Fred Daniel in his R1-billion civil suit against the government, laid out in the missive how the government defendants had time and again “put sand in the gearbox of the administration of justice”.

In this context, the failure of Hellens and Joubert to show up at the meeting was a relatively minor complaint. Accessed by Daily Maverick on CaseLines — the online trial bundle to which we had been granted access by Judge Sardiwalla — the letter opened with quotes from the government team’s threat to sue Daniel’s advocate “in his personal capacity”.

As background to such tactics, DLBM referred to a series of events that, if they weren’t backed up by the court record, would have been difficult to believe.

Way back in July 2020, it turned out, a judicial directive had been granted to “curtail the ambit of the trial” by making cuts to the parties’ respective witness lists. The civil action, which had been launched by Daniel 10 years before, was clearly a matter that the justice department wanted finalised. But the very next day, noted DLBM, the defendants had done the opposite — they had “expanded” their witness list. Not only that, Daniel’s attorneys added, but they had threatened that if the plaintiffs removed witnesses, these same witnesses would be added to their list.

And then, according to DLBM — who were referring, again, to documents in the court record — the defendants had for no rhyme or reason added Charles Ndabeni and Richard Spoor to their list of witnesses. As readers of Daily Maverick may remember, Ndabeni had just signed a pivotal affidavit on Daniel’s behalf, while Spoor, one of the country’s foremost land rights experts, would later give testimony so explosive that it would all but blow Mabuza’s case apart.

Still, to return to the letter of 6 July, the litany of DLBM’s provable allegations did not end there. Advocate Andre Ferreira, who would be replaced by Joubert as senior counsel for the government in early 2022, “took it a step further by stating that his clients will not make the admissions as requested, even if the plaintiffs threaten to break his fingers”.

Had Daniel or his legal team ever threatened violence against the government defendants? Daily Maverick could find no evidence of such a thing. On the contrary, our long-running coverage of the case had demonstrated that the violent intimidation had emanated, consistently, and in the strangest of ways, from the other side. Which was why DLBM also noted that “the relevant government officials should be made aware of the security concerns of the plaintiffs and their witnesses”.

With the fourth session of the trial due to kick off shortly, stated DLBM, “threats to the plaintiffs and their witnesses are likely to escalate”.

The attorneys noted that the trial had become a “frozen conflict”, and that, as office-bearers, the current government officials had an obligation under section 7(2) of the Constitution to “respect, protect, promote and fulfil” the plaintiffs’ rights to a fair hearing. Then, near the end, DLBM pointed to the essence of the trial: the ongoing damage to Mpumalanga’s natural environment as a result of the documented governmental corruption.

“[The defendant’s] expert Dr Anderson confirms the catastrophic damage caused by the over-population of elephants to the biodiversity at the Nkomazi Game Reserve,” noted DLBM, referring to the nature reserve that Daniel had allegedly been forced to flee as a result of the Mpumalanga land claims scam. As Daily Maverick has previously reported — and as DLBM repeated — after Daniel had sold the majority of his shares, there was a barrier fence erected on the reserve that was, and remains, “illegal”.

To bring the story full circle, then, did Hellens and Joubert deserve the title of “South Africa’s smartest lawyers”?

On 24 June 2022, it was reported by News24 journalist Karyn Maughan that Hellens — in a local case that had since become central to the potential extradition of Rajesh and Atul Gupta — had slammed the fraud and money laundering charges against the brothers as “woefully inadequate.” Hellens, noted Maughan, had threatened in the Bloemfontein High Court that he would litigate to compel the National Prosecuting Authority to fully disclose the case that the brothers had to answer. In the ensuing confusion, the judge had postponed the case to 8 September.

By Bruce’s definition, presumably, this would indeed count as “smart”. And as for their non-appearance before Judge Sardiwalla, it took just two days for the state attorney to fire back a very clever letter on the advocates’ behalf.

“A further example of your one-sided attitude is to criticise,” he informed DLBM, “for their non-appearance at the inspection in loco meeting on 9 June 2022, both Advocate Mike Hellens SC and Advocate Dawie Joubert SC. Both of these senior counsel sent e-mails with regard to their inability to attend, as they were not even in the country and were actively engaged in other work matters, rendering it impossible for them to attend the meeting. To make matters worse, the meeting was not even arranged but simply announced, without regard to anyone’s availability.”

Nowhere in the state attorney’s letter of 8 July was there mention of either the expanded witness lists or the security threats. In the days leading up to 8 August, it seemed — when the fourth session of the trial was scheduled to begin — things would only get hotter. DM/OBP

Conservationist vs DD Mabuza: Threats ‘likely to escalate’ as resumption of trial looms