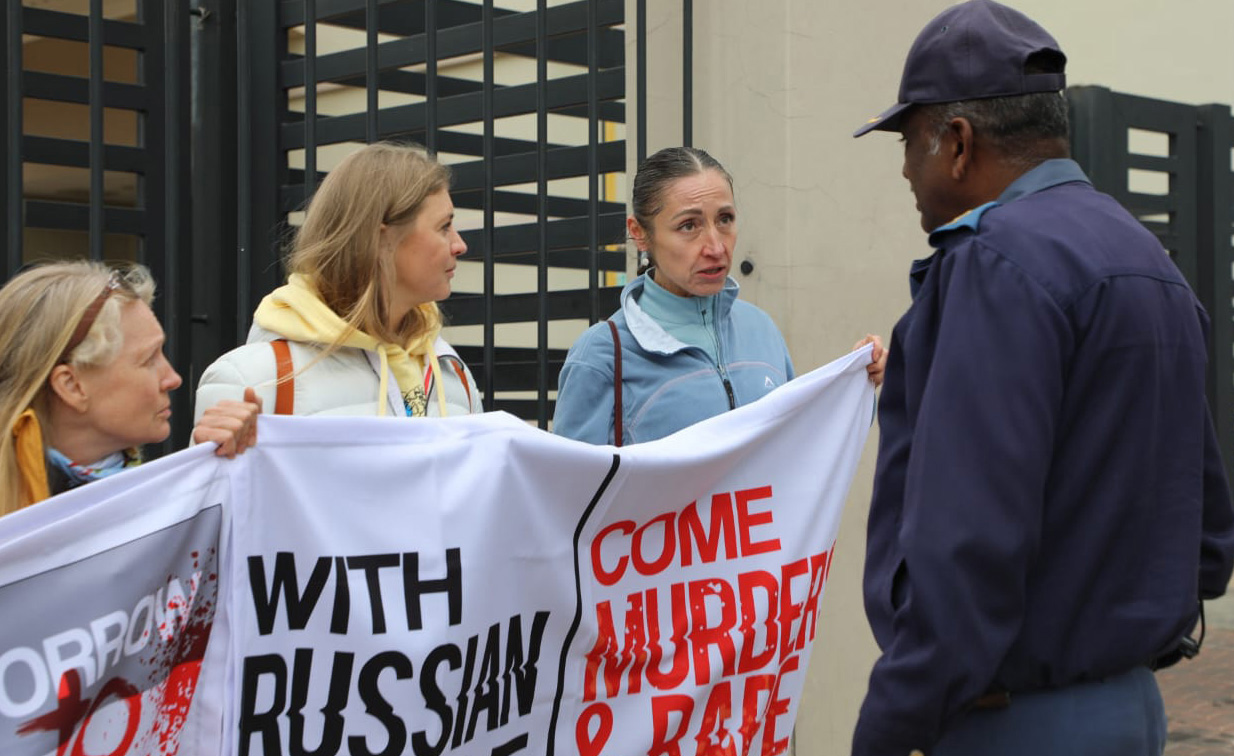 A small group of Ukrainian women, joined by some Russian women living in South Africa, demonstrate outside Holiday Inn Sandton City at the Russian-SA investment meeting on 20 July 2022. (Photo: Supplied)

Potential Russian investors in South Africa held a closed-door meeting with South African government members and businesses in Sandton on Wednesday, which was picketed by Ukrainians protesting that: “With Russian trade comes murder and rape.”

They told South African companies that doing business with Russia was helping finance “the atrocities and horrible war crimes of the Russian army” against Ukrainian civilians.

The meeting was organised by the Russian Export Center Group, a Russian state-owned agency. The draft programme listed 12 Russian companies as participants. Some are manufacturers of agricultural equipment, while others are in industries such as recycling water and waste, electrical power material manufacturing, manufacturing of oil drills, gas, oil and nuclear energy production, and the manufacture of aerospace, rail, oil-and-gas, navigation and telecom electronics.

Russia’s ambassador to South Africa, Ilya Rogachev, and other Russian officials were also listed on the programme as speakers.

On the South African side, the minister of trade, industry and competition, Ebrahim Patel, and the minister of social development, Lindiwe Zulu, were billed to speak too. But news media were barred from the event so it could not be established if they or anyone else on the programme was actually there.

Members of the Ukrainian Association of South Africa staged a picket outside the Holiday Inn venue, holding banners reading: “Today Russians Come to Trade; Tomorrow to Pillage and Rape” and “With Russian Trade Comes Murder and Rape”.

The association’s president, Dzvinka Kachur, said they had asked Holiday Inn to cancel the event. “They did not reply, but we’ll keep raising awareness.”

Daily Maverick contacted the hotel for comment, but the general manager, Leshen Naidoo, did not respond. Kachur noted that the head office of Holiday Inn – which is based in the UK – had earlier announced that it was pulling out of Russia in the wake of the war in Ukraine and Western sanctions against Russia.

The Ukrainian Association said in a statement that it was “calling upon South African companies to cease any cooperation with their Russian counterparts, both private and government-owned.

“To cooperate with Russian businesses is to financially contribute to the atrocities and horrible war crimes of the Russian army against the population of the affected Ukrainian regions including robbery, kidnapping and deportation of civilians, raping women and children, conducting interrogations and demonstratively executing people (for reasons like refusal to vacate their homes, give up food etc) in order to instil fear.

“We appeal to your moral values and dignity, and encourage you to cut all ties with the country that is becoming an outcast of the civilised world. By doing business with Russia you are financing world-scale terrorists. Blood-stained money will only last so long, but blood-stained conscience lasts forever.”

The association noted that: “World-renowned brands and international corporations continue leaving [the] Russian market and cut their economic and financial ties with the terrorist country.”

REC Group says it offers a wide range of financial and non-financial support for the foreign partners of Russian companies and for Russian exporters. REC Group wrote to Bonang Mohale, the president of Business Unity SA (Busa), inviting Busa to attend, in a letter which Daily Maverick has seen.

However, Busa CEO Cas Coovadia told Daily Maverick: “We circulated details of the conference to members, and asked them to register directly. We have not followed up on attendance.”

He declined to say why Busa did not attend. However on 1 March 2021, Coovadia had issued a statement on behalf of Busa, saying: “We are gravely concerned about the situation in Ukraine and the impact of the Russian invasion. First and foremost, we empathise and stand in solidarity with the people of Ukraine and the hardship imposed on them by this unnecessary war.”

Meanwhile, a giant Antonov AN124 cargo plane registered in Russia which had been reportedly stranded at OR Tambo International Airport for a week after the fuel suppliers there refused to fill it up for the flight back to Russia, flew to Maputo on Monday evening and then left there on Wednesday, aviation and diplomatic sources said.

They believe the petroleum company BP refused to refuel it at OR Tambo because it is a British company. Britain has imposed sanctions on Russia because of its invasion of Ukraine.

They believe it probably flew to Maputo to be refuelled. It was spotted in the cargo terminal of Maputo International Airport on Tuesday and then left on Wednesday, flying north.

There had been speculation that the South African government might allow the Antonov to fly to Waterkloof Air Force base to refuel, but this would probably have been highly controversial as the base is a key security point.

City Press reported this week that the aircraft was carrying government cargo, but this could not be confirmed.

Aviation sources said they didn’t know what was in the Antonov. They said it belonged to Volga-Dnepr Airlines, based in Ulyanovsk, Russia. The airline specialises in transporting oversize, unique and heavy air cargo, particularly in the petrochemical, energy, aerospace, agriculture and telecommunications industries.