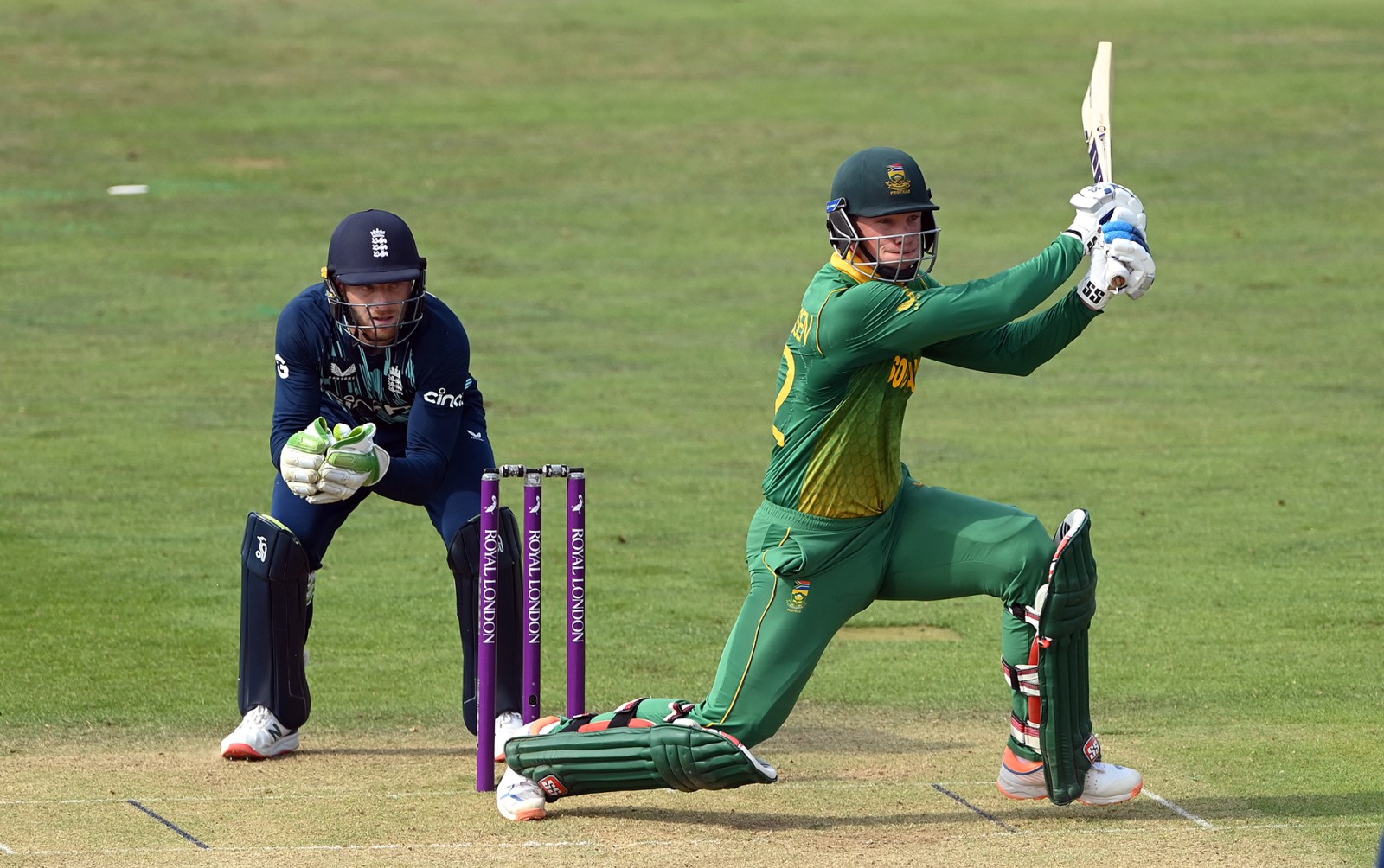 Proteas batsman Rassie van der Dussen, watched by wicketkeeper Jos Buttler, hits out on his way to his highest ODI score of 134 during the first ODI against England at Riverside in Chester-le-Street on 19 July 2022. (Photo: Stu Forster / Getty Images)

A clinical and composed display by the Proteas — led by an immaculate century by Rassie van der Dussen — saw them defeat England at home by 62 runs.

South Africa set England an impressive 334 to win the first One Day International (ODI) in the three-match series, a total that would always be challenging on the massive Riverside Ground in Durham.

With England facing one of its highest recorded summer heat waves in history, Van der Dussen exhibited extreme skill and attrition to record his highest ODI score of 134 off only 117 deliveries in the scorching heat.

The star white-ball batter, who now averages 75 in the 50-over format, struck only 10 fours in his innings, recording 94 of his runs in singles, twos or threes on the massive Durham outfield.

Earlier in the day, stand-in skipper Keshav Maharaj won the toss and elected to bat first, a decision that would turn out to be vital. England struggled in the field as debutant fast bowler Matthew Potts bowled only four overs before being taken from the field after suspected heat exhaustion.

The Proteas’ first innings score of 333 is their highest against England in England.

Openers Janneman Malan and Quinton de Kock got South Africa off to a solid start, scoring 35 runs in the first seven overs before de Kock was dismissed for 19 by Sam Curran as he attempted to push on.

Van der Dussen joined Malan at the crease and the two made full use of the deep square boundaries and the flattening pitch, manipulating England’s spinners Moeen Ali, Adil Rashid and Liam Livingstone excellently through the middle overs as they shared a 109-run partnership.

Malan was eventually dismissed by Ali for 57 off 77 deliveries, trying to launch the off-spin bowler to the deep midwicket boundary, but only managing to find Livingstone in the deep.

Aiden Markram came in at four and continued the momentum with Van der Dussen. The two came together with the score at 144 for two in the 26th over.

Markram and Van der Dussen continued to nudge and nurdle the bowlers, running hard between the wickets and putting away the bad deliveries as they continued to bat at over run a ball.

With the innings reaching the last five overs and both batters trying to up the ante, the massive square boundaries were the undoing of Markram as he holed out in the deep off the bowling of Livingstone for a well-composed 77 runs off 61 deliveries, sharing in a 151-run partnership off only 122 deliveries with Van der Dussen.

The partnership ended in the 46th over with the score on 295.

Van der Dussen was dismissed two balls later. Livingstone cleaned up the No 3 batter as his tired arms attempted to lash the ball over the boundary.

Livingstone finished with figures of two wickets for 30 runs off his four overs.

David Miller and Heinrich Klaasen finished off the innings well, both hitting at healthy strike rates. Miller finished not out on 24 off 14 deliveries while Klaasen was debutant Brydon Carse’s first victim, falling for 12 off 10 balls in the final over.

South Africa’s mammoth score of 333 was made more impressive by the fact that they did not strike a single six throughout their innings.

In what was 2019 World Cup hero Ben Stokes’s last ODI appearance, the English went out with a bit of a whimper in their chase instead of the thunderous, dominating displays audiences have become accustomed to in recent years. Perhaps a sign of things to come as they have lost three ODI matches in four games.

England openers Jason Roy and Jonny Bairstow set the foundation for the chase well, putting on a 100-run partnership before skipper Maharaj dismissed Roy for 43 off 62 to leave England at 102 for one.

Bairstow followed his opening partner to the dressing room shortly after as the part-time off-spin bowling of Markram caught Bairstow leg before wicket, trying to sweep a delivery that was too full.

It was a bitter end for England’s red-ball captain a few balls later as the spin of Markram struck in the same fashion, as Stokes attempted a reverse sweep. An unconventional end for an unconventional player in front of his home crowd.

Joe Root continued on his merry way from the other end as he looked unbothered facing the varied South African attack.

The pitch got more difficult as the day wore on as South Africa’s spin bowling continued the attack. Tabraiz Shamsi spun a web around England’s dangerous white-ball captain Jos Buttler, to trap him caught and bowled for a run-a-ball 12.

With the ball sticking in the pitch slightly, Livingstone didn’t last long either as a pitch-perfect off-cutter from Lungi Ngidi ensured the big-hitter dragged the ball on to his wicket for 10 runs off 14 balls.

Shamsi then struck again as Ali fell into an excellent trap set by the spin bowler and captain Maharaj.

Sam Curran and Root then put on a rearguard act as the pair scored 53 off 41 balls.

It was then the turn of Anrich Nortje who consistently hit frightening pace, exceeding 145km/h.

Nortje first dismissed Root for an excellent 86 off 77 deliveries, striking five fours and two sixes. Root, trying to keep up with the required run rate that exceeded 12, dragged the ball on to his stumps as he top scored for his side. With Root dismissed and England languishing on 252 for seven in the 45th over, the match was as good as gone for the home side.

Curran was Nortje’s next victim as the searing pace of the quick bowler thundered the ball into Curran’s pads to dismiss him for a run-a-ball 18.

The tail of Carse and Rashid was no match for Nortje as he wrapped up the match in the 47th over. Nortje finished with figures of four wickets for 53 runs in 8.5 overs. DM