Kids miss first day of term after protests outside a ru... 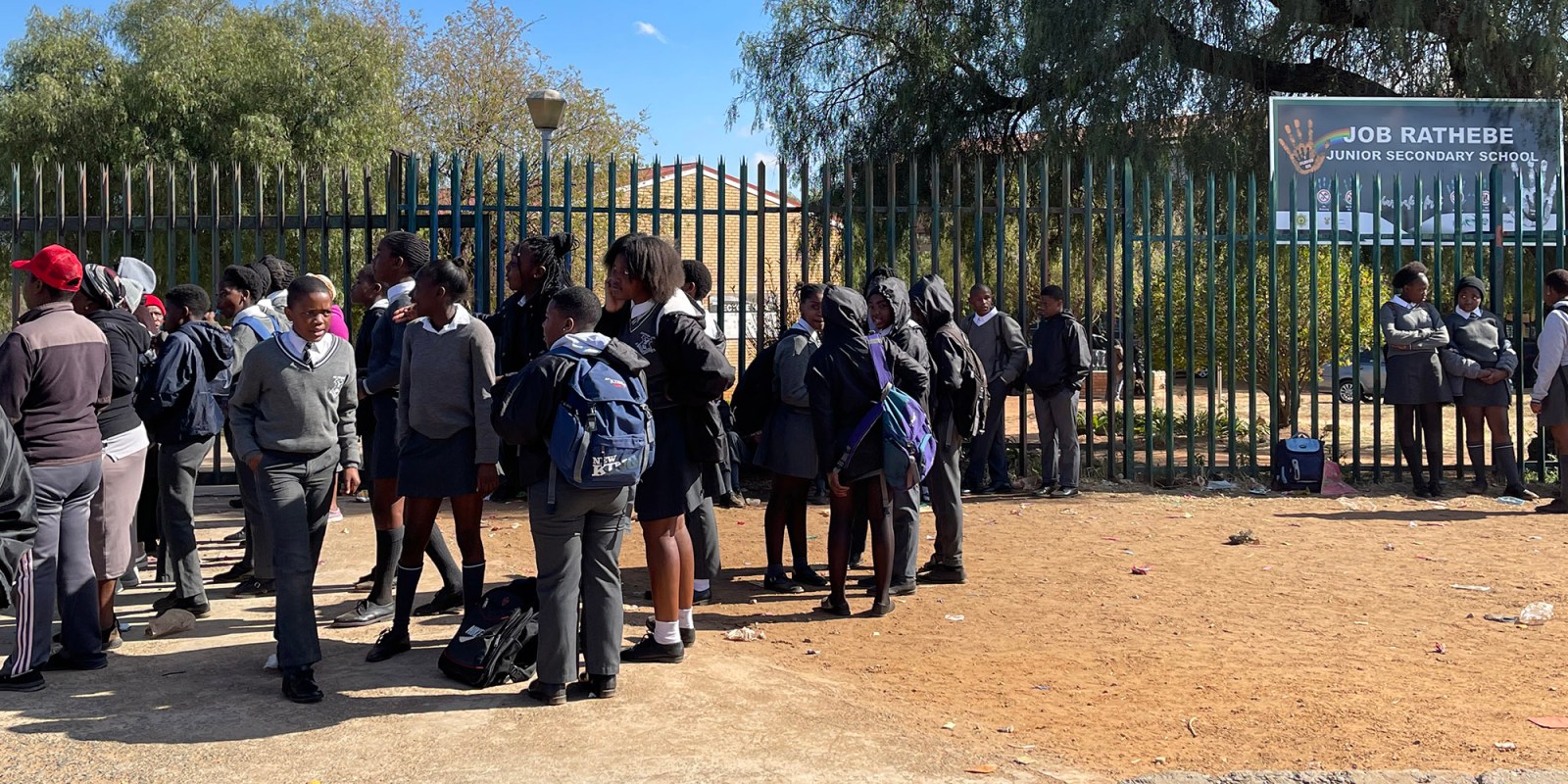 Hundreds of pupils from Job Rathebe Junior Secondary School in Soweto missed the first day of term on Tuesday when parents, members of the school governing body and others blocked the gates. They were protesting against the lack of maintenance, poor management and general state of neglect at the school.

The first day of the new term at Job Rathebe Junior Secondary School in Soweto was disrupted when angry parents and residents of Orlando East barricaded the school gates in protest at the way the school is run.

The school accommodates about 900 pupils.

The treasurer of the school governing body, Myron Shongwe, told Daily Maverick the SGB has a mandate from parents and pupils to ensure that teachers teach and pupils learn in an enabling environment that is safe, clean and with all the essentials to promote learning.

According to Shongwe: “The main issue is the school principal who has mostly been absent from work since last year because she is sickly. She is literally running the school from her house… she is not well-informed about the issues faced by the school because she is hardly here.

“There are only six toilets — not well maintained or cleaned — that are meant for 900 pupils. Three pupils have to share a desk because there is a shortage. These conditions are unacceptable.

“We demand that the department of education intervenes now, or shuts down the school if they are not willing to do basic maintenance and governance.”

The school is opposite the home of Dr David Pooe, the first black man to own a supermarket in Soweto. Pooe’s great-grandchild, Dr Mpho Pooe-Mohlala, said the state of the school was shocking.

“Although people often undermine education in township schools, I, for one, had a really good foundation at Job Rathebe Junior Secondary School. I am a doctor today because of this same school.

“It saddens one and frustrates one to see the school in this state… it’s an infringement of the rights of these children and detrimental to the legacy of my great-grandfather Dr David Pooe and [education activist] Job Rathebe,” she said.

Nomvuzo Ngwenya, a parent of one of the pupils, said: “The school is very dirty and so are the toilets. On top of that, our children have to be squashed together at a table. How on earth are they supposed to learn in such conditions?

“My child is always complaining that teachers insult them and some go further to call them out as products of rape… our children are scared to go to school. If they are not dropping out, they are rebellious or bringing knives and guns to schools to protect themselves.

“We want a new principal… who will sort out the many issues here. The current principal is corrupt and so are the teachers.”

According to community safety activist Philip Tropica Hlophe, the school is a health hazard and a “war zone” because it lacks discipline. Hlophe said his grandchildren are always complaining about gangsterism at school.

Brenda Mjiyako, from the local neighbourhood watch, said they had visited the school multiple times after pupils had stabbed one another.

“All the visits that we had, the principal was never there… she runs the school from home.”

For several hours on Tuesday, officials from the Gauteng Education Department were locked in a meeting with parents and community leaders to discuss a way forward.

After the meeting, Dennis Macaucau, chief director of education in the Johannesburg region, told journalists that an interim committee consisting of parents, the SGB, the provincial education department and his office would deal with the issues raised.

Macaucau said an interim principal would be deployed while investigations were under way. He agreed that the school was poorly maintained, something he said was a problem at most schools in the area.

Steve Mabona, spokesperson for the provincial education department, said: “It is quite unfortunate that there is a lack of governance in the school. As a result of the mismanagement of funds, the head of department has decided that finances must be temporarily run by the district.

“As the DBE, we have allocated a service provider to start with maintenance as of Tuesday, and moving forward there will be a task team to work with the school in its entirety as we find long-term solutions to the other issues raised.”

Classes are expected to resume on Wednesday. DM