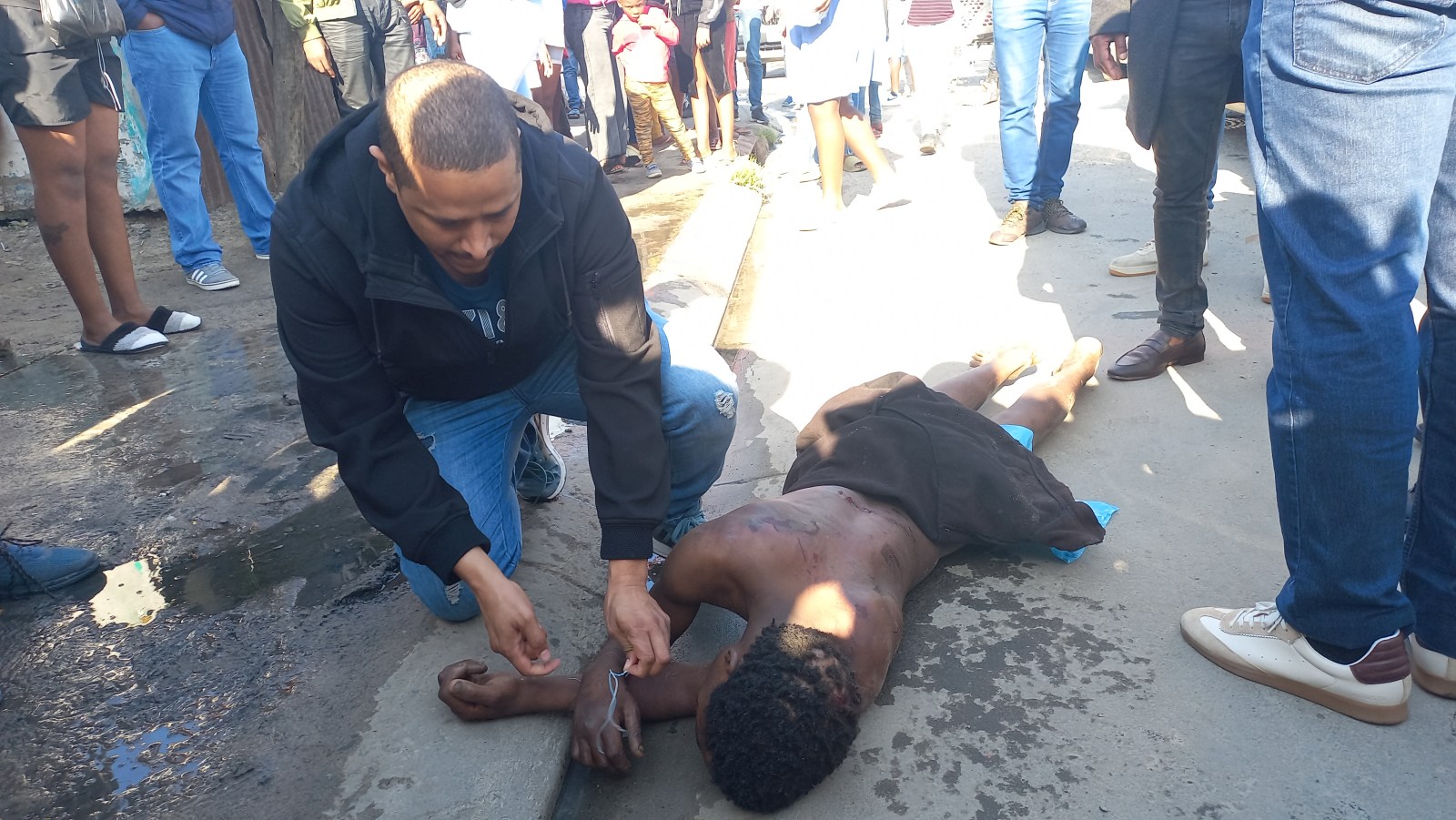 A detective, who was part of the convoy escorting provincial police commissioner Thembisile Patekile through Khayelitsha on Sunday, helps a man assaulted by community members. (Photo: Siphokazi Mnyobe)

The state officials were visiting the scene of a deadly shooting when they came across a man being beaten by residents.

Western Cape Police Commissioner Thembisile Patekile and Western Cape community safety MEC Reagan Allen were confronted with vigilantism while visiting Khayelitsha, Cape Town, on Sunday. A man had been left on the street, bloodied and naked, with his wrists bound with wire.

The badly-beaten 27-year-old man was accused by community members of stealing from a taxi in Site C.

The officials and their entourages were visiting Ntango Street, where three people had been shot dead the previous night, when they came across a crowd cheering as two people, believed to be taxi drivers, beat the man they accused of being a thief.

GroundUp saw the man covered in blood, lying in the street. Police covered him with a plastic sheet and a jacket. He was taken to hospital by police about 30 minutes later. The two men who beat him were put in the back of a police van.

The two attackers are due in the Khayelitsha Magistrates Court soon on assault charges, said Western Cape SAPS spokesperson Andre Traut. He said Khayelitsha detectives at the scene had “put an end to the mob justice”.

A resident, who asked to remain anonymous, said the community was tired of the police’s failure to solve crime in Khayelitsha. “You never see police patrolling in Site C to protect us. They wait for criminals to steal then come to save the criminals when we are ‘fixing’ them,” she said.

After witnessing the assault, Patekile said it was a sign that people have lost hope in the police. “They thought they were doing the right thing, but now they are in the wrong and are arrested. The men will be charged and have criminal records. We are even witnesses in that case,” said Patekile.

On Monday, Police Minister Bheki Cele, Home Affairs Minister Aaron Motsoaledi and Minister in the Presidency Mondli Gungubele are to attend a crime and community imbizo in Khayelitsha. The event is in response to an increased number of contact crimes in the township, including most recently multiple shooting incidents over the weekend. DM