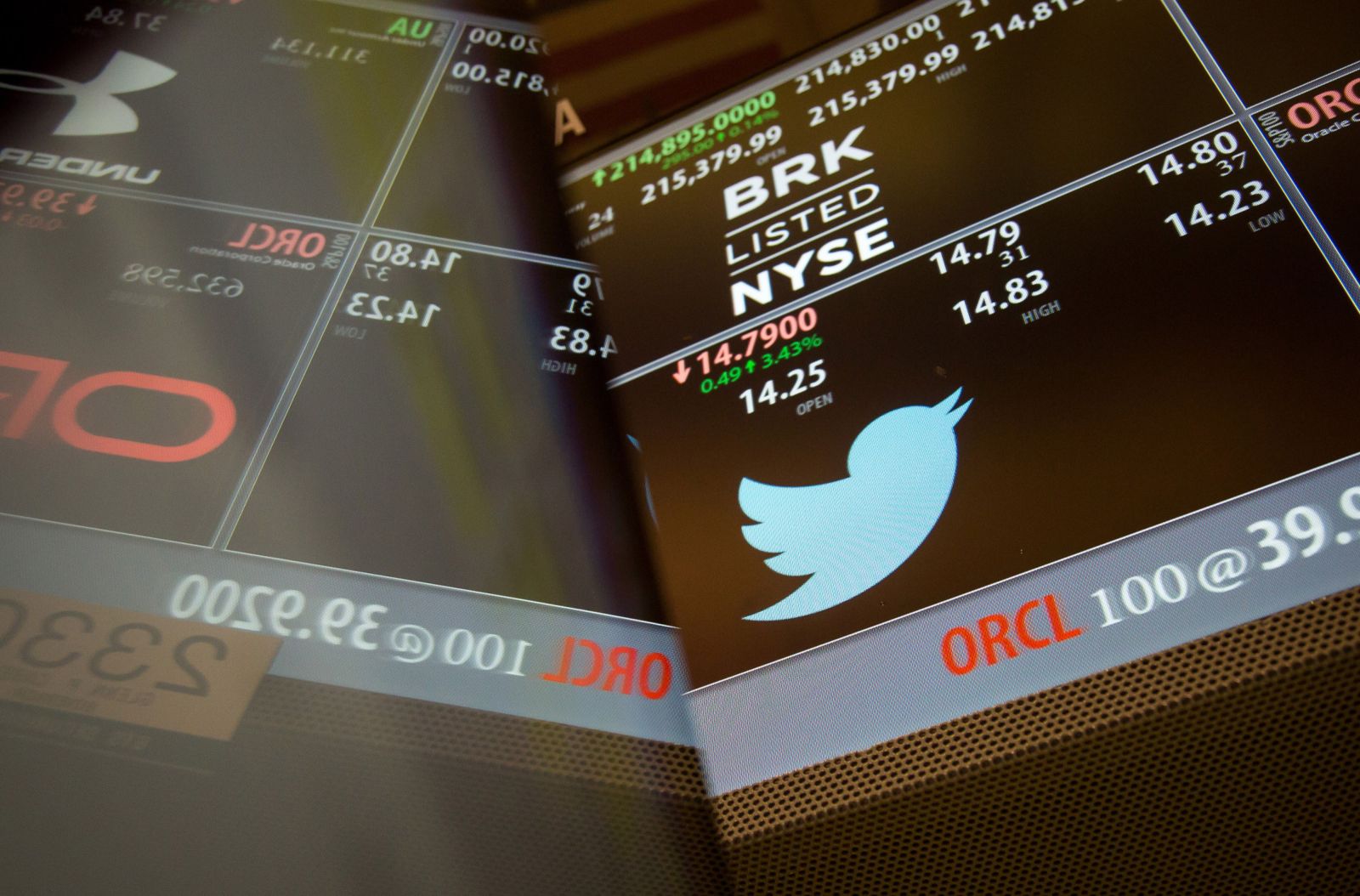 Twitter signage is displayed on a monitor on the floor of the New York Stock Exchange. (Photo: Michael Nagle/Bloomberg)

Underwriting losses would be partly offset for Morgan Stanley, Bank of America, and Barclays, which provided fees for M&A advisory services to Musk. Four other banks that only provided the debt – MUFG Bank, Mizuho, BNP Paribas SA, and Societe Generale SA – risk going deeply into the red if the deal goes ahead.

Banks are usually upset when large leveraged buyouts fall apart because of the hefty fees they generate. But Elon Musk’s decision to back out of a $44- billion bid for Twitter may mean dodging steep losses from underwriting the debt.

Credit markets have tumbled since banks first agreed to raise $13-billion to finance the deal in April. The riskiest piece of the debt package alone would have caused losses of between $150-million and $200-million at current market levels, according to Bloomberg calculations.

When banks commit buyout debt, they provide temporary financing that’s replaced by high-yield bonds and leveraged loans. They agree to cap the cost of the new debt, which is sold to investors.

Banks had promised that the riskiest Twitter buyout debt – $3 billion of unsecured bonds to be rated CCC, the lowest rung of junk – would cost no more than about 11.75%. That compares to a market average of about 13.6% on comparably-rated bonds, up from 9.9% when the deal was announced.

At a fixed 11.75% coupon, and assuming an eight-year maturity, banks selling the unsecured bonds today would have to offer a discounted price of about 91 cents on the dollar to reach an all-in yield of about 13.6%. That would result in a loss of between $150-million and $200-million, net of underwriting fees banks typically earn for selling unsecured debt.

The Twitter financing package – one of the largest in recent memory – also includes $6.5-billion of leveraged loans and $3-billion of secured junk bonds. Those types of debt have held up better than unsecured bonds – though the loan market has dropped significantly – and it’s unclear how much of a loss, if any, banks would take at current market levels.

Underwriting losses may be at least partly offset for Morgan Stanley, Bank of America, and Barclays, which would be expected to receive fees for providing M&A advisory services to Musk. Four other banks that only provided the debt – MUFG Bank, Mizuho, BNP Paribas SA, and Societe Generale SA – risk going deeply into the red if the deal goes ahead.

The situation is in flux because Twitter’s board plans to sue to force Musk to complete the acquisition. If that happens and debt markets rally, banks may be able to fund the deal without losses.

In a letter to Musk on Sunday, Twitter’s lawyers said the billionaire’s purported termination of the merger agreement is “invalid and wrongful” and that equity and debt commitments for the deal remain in effect.

Twitter isn’t the only LBO threat to banks. The biggest pain point is the upcoming $15-billion package helping to fund the buyout of Citrix, signed in late January, which could leave banks on the hook for about $1-billion of losses.

The founders of bankrupt crypto hedge fund Three Arrows Capital haven’t been cooperating in the firm’s liquidation process and their whereabouts were unknown as of Friday, according to court papers

China Evergrande Group suffered its first rejection from local creditors to extend a bond payment, a development that may result in a landmark onshore default and encourage investors to take a tougher stance against other developers battered by the nation’s property debt crisis.