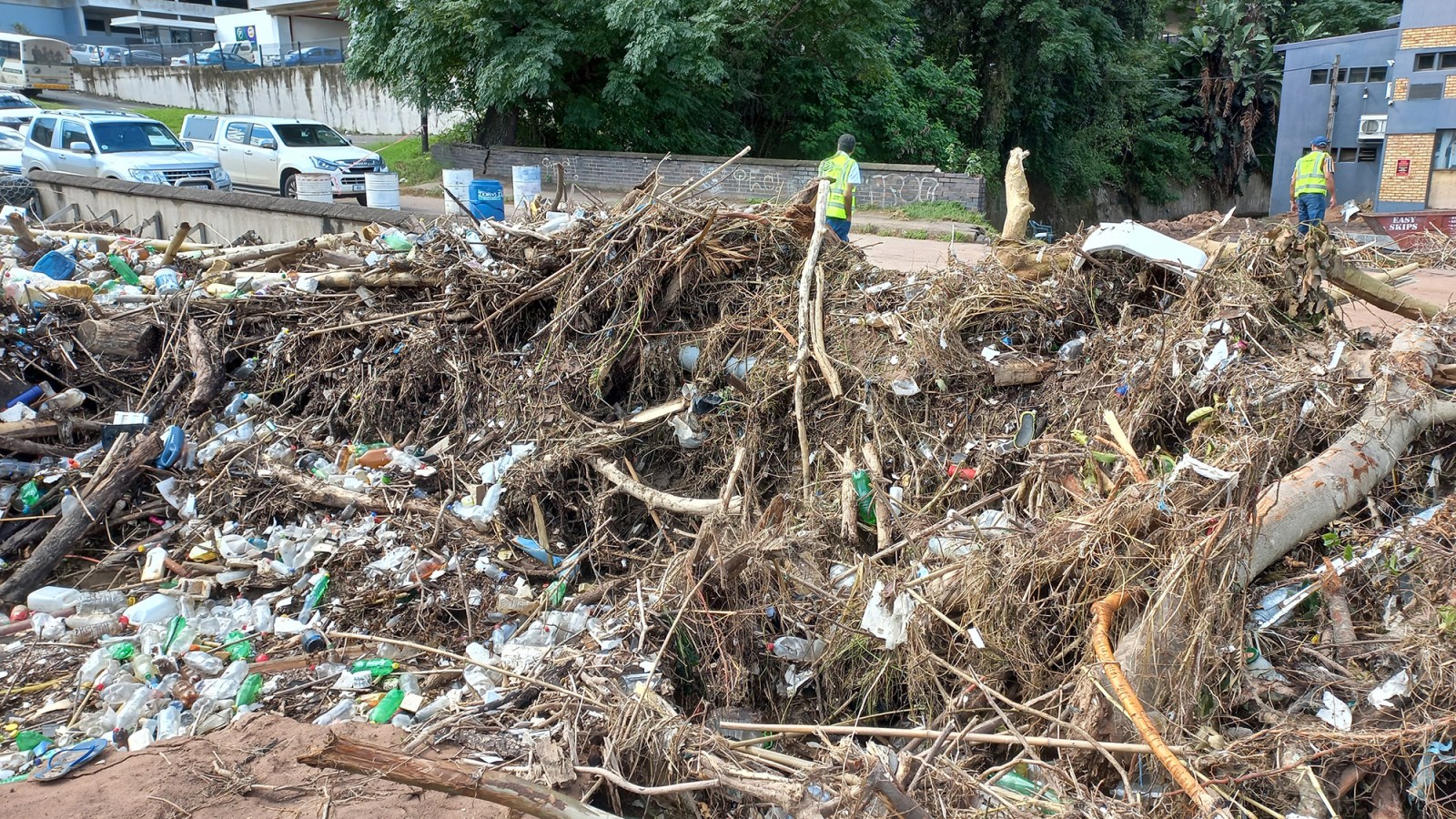 A mountain of uprooted alien vegetation and litter forms a dam wall against the side of a river crossing in Durban, exacerbating the damage to city infrastructure during the April 2022 floods (Image: Ethekwini)

A R719-million river clean-up and flood protection project in Durban could serve as a model to cushion other vulnerable cities in Africa from the impacts of climate change.

Water is the source of life — yet it is also one of the most terrifying and relentless forces of nature.

This became very clear during the recent Durban rain bomb, when floodwaters in 18 local river courses damaged or ripped away tons of expensive, carefully engineered steel and concrete structures.

Bridges are designed with great care to withstand the ferocity of flooding, by allowing the water to flow past their supporting pillars. But what happens when they are blocked by mountains of water-borne vegetation and litter?

Instead of allowing the free passage of water, the unexpected accumulation of debris can turn bridges and road culverts into the equivalent of dam walls. When that happens, the power of water is bound to triumph, either by smashing down the obstacle or gouging a new path to get around it.

And yet, there was comparatively little damage to road culverts in some parts of Durban in April — thanks in large part to a series of river management projects initiated by the eThekwini municipality and local conservation and private sector groups almost a decade ago.

Geoff Tooley, eThekwini’s senior manager for coastal stormwater and catchment management, estimates that more than 80% of the destructive river blockage in April was due to alien invader plants rather than solid waste or litter.

Speaking at the launch of the city’s new R719-million Transformative River Management Programme (TRMP) on 7 July, Tooley noted that historically, culverts were designed using purely hydraulic capacity calculations, with not enough thought given to the debris carried by rivers during storm events.

Now, due to the more recent proliferation of alien vegetation and increased volumes of trash dumped in local rivers, the frequency of blockages has increased.

“Alien vegetation has a shallower root system in contrast to the deep-rooted indigenous vegetation, so during large storm flows, the aliens wash away easily, causing further erosion of larger trees and sandy soils which block culverts further downstream.”

This was not the case, however, in several sections of KwaMashu, Newlands and Umhlatuzana due to the Sihlanzimvelo Stream Cleaning Programme launched by the city’s roads and engineering department in 2012.

Sihlanzimvelo (“we are cleaning the environment”) focused on slashing the recurrent cost of repairs to road culverts by managing stream areas more effectively — while also creating jobs for Durban’s growing ranks of unemployed.

The benefits are obvious, says Tooley, who estimates that the scheme saves the city at least R59-million every year, based on avoided costs of damage to road culverts alone.

By scaling up Sihlanzimvelo and other river management schemes massively, the city believes it can save even more money while creating several thousand jobs and making a more meaningful impact to protect vulnerable communities from climate change hazards.

However, this clean-up of rivers to protect culverts and bridges is just one dimension of Durban’s new TRMP project, which is being supported financially by the C40 Finance Facility (CFF) to cover more than 7,000km of Durban’s major river courses.

Ravi Pillay, MEC for environmental affairs in KwaZulu-Natal, notes that a GIS satellite-based early warning system developed by the University of KwaZulu-Natal and eThekwini ensured that no one drowned in the Quarry Road informal settlement in Durban during the recent floods — although more than 400 shacks in this area were subsequently damaged or washed away by floodwaters.

Pillay acknowledges that the proliferation of informal settlements in floodplains around Durban and other cities in Africa remains a major headache.

“This is a complex challenge. It’s not as easy as government just providing alternative land somewhere else… people want convenient access to jobs.”

Hastings Chikoko, the C40 Cities regional director, has hailed Durban’s TRMP project as a model that can be emulated and adapted by mayors in other African cities increasingly vulnerable to severe storms due to climate change.

“Floods are one of the most common climate-induced disasters in several parts of Africa predicted by the World Weather Attribution network,” says Chikoko, “So we need climate-resilient solutions that are built to last.”

A business case report prepared for the C40 Cities network by the FutureWorks consultancy group suggests that the historic failure to invest in (often ill-defined or intangible) “ecosystem services” has led to a significant decline in the condition and functionality of most of the city’s rivers.

Often, that’s stuff that older folk take for granted — basic things like clean drinking water in our dams, or unpolluted rivers where people can catch healthy fish, relax or paddle a canoe or enjoy a picnic after a hard week at the office.

FutureWorks says this decline in free ecological services from rivers will create significant risks to the municipality, to society and to the local economy.

“Coastal recreational users and property owners will also be affected by changes in (river) water quality and the condition of estuaries and beaches. These are expected to drive significant negative impacts on Durban’s local economy, particularly in relation to coastal tourism.”

Just one example is the filth and sewage that has fouled Durban’s beaches over the past few years and led to several closures of tourist beaches along the city’s Golden Mile.

eThekwini mayor Mxolisi Kaunda says: “Well-managed ecosystems provide over R4-billion worth of services to our city and its residents annually. These waterways are not only responsible for providing water, but they also help regulate the impact of heavy rains and floods if well managed. Therefore, putting the necessary resources into rivers and catchments must be central to the city’s climate adaptation response.”

But to reduce these risks, Durban and other cities will also have to build political support to invest much more money into those less sexy infrastructure projects, such as maintaining and repairing crumbling wastewater treatment works.

The scale of the multidimensional challenge is underlined by the fact that eThekwini is not the only party responsible for restoring the city’s sick rivers.

A recent assessment of riverside land ownership shows that eThekwini controls just less than a quarter of this land. Roughly 26% is privately owned and more than half is controlled by the Ingonyama Trust — so it’s crucial to build partnerships with the private sector and traditional authorities.

As the population increases in rural and peri-urban settlements, Durban’s rivers will come under further pressure due to more pollution from sewage, litter and higher volumes of stormwater from expanding human settlement.

Several private or community initiatives have made a start already by installing floating litter booms to capture trash before it ends up on the beaches.

Ideally, however, the problem of water-borne litter needs to be tackled at the source by providing dependable refuse removal services and through more vigorous education campaigns to stop rivers from becoming convenient rubbish dumps.

Dr Sean O’Donoghue, senior manager of the city’s Climate Change Adaptation Branch, is confident that the new Transformative River Management Plan has the potential to create thousands of jobs and new sources of income for local communities and private project partners.

Mountains of plastic fished out of river courses could also be recycled into a variety of new products, while unemployed communities can benefit by removing alien plants and then replanting or reseeding river courses with indigenous vegetation.

Yet, as Chikoko noted last week: Talk is cheap. Now it’s time for the city to translate its bold commitments and plans into action. DM/OBP