A jumbo operation as Kruger Park elephant is tested for...

A jumbo operation to test Kruger Park elephant for TB 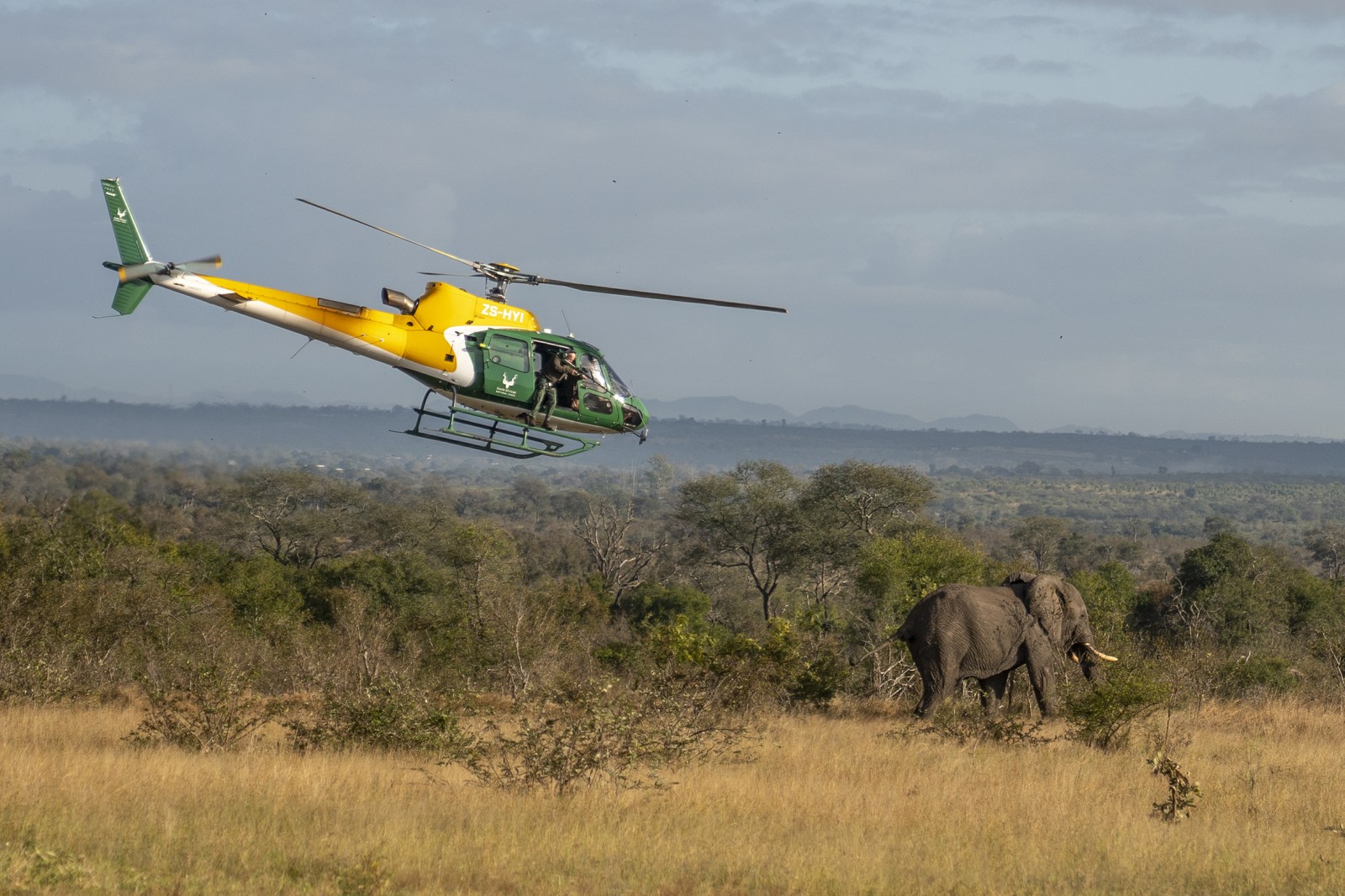 Daily Maverick was a guest of the Kruger National Park to witness the darting of an elephant to test for tuberculosis. This is part of a research project with Stellenbosch University, which comes after an adult elephant bull was found dead from human tuberculosis in the park in 2016.

A SANParks H125 helicopter hovers above an elephant bull in the southern part of the Kruger National Park. The cabin door is open and veterinary senior manager Dr Peter Buss stands on the landing skids. Safely strapped to the helicopter, he uses a dart gun to anaesthetise the huge animal with a combination of a potent opioid (thiafentanil) and a tranquilliser (Azaperone).

Buss recalls: “We got news of a dead elephant, so we went to have a look. Sure enough, there was a carcass next to the road and we thought the elephant was just sleeping. We watched it carefully and realised that it, in fact, had died… we did the postmortem and found TB [tuberculosis] in the elephant. The Kruger is full of bovine TB…  So we thought, well, it’s gonna have to be bovine.

“We sent it off for sampling and speciation. It came back as human TB, which really surprised us because… where does an elephant get human TB from, particularly a wild one?”

Since then, about 49 elephants in the park have been tested for the disease.

When DM accompanies Buss, it’s a beautiful morning and weather conditions are favourable for the mission. Flying in the park on a regular basis has given the team an indication of where the elephants can be found. And given the size of the elephants, they are visible from a distance.

The pilot, David Simelane, needs to understand the behaviour of the animal that is to be darted and how to fly low over the terrain in the helicopter. There is no time for second-guessing.

Simelane is SANParks’ first black chief pilot and leads a team of four pilots, two engineers and ground staff. He joined SANParks in June 2020. On the difficulty of flying while darting elephants he says: “You are flying very low… where helicopters theoretically shouldn’t be flying. If something were to go wrong, the chances or the margin for error to be able to put the helicopter down safely is lessened drastically… it takes a high-calibre pilot to place the helicopter in a position for the animal to be darted safely, [considering] vegetation, terrain, heat and power availability on the helicopter.”

Once a suitable elephant is located, Simelane flies close to the animal, about 5m above it, to make sure of its size. He then backs off, but keeps the mammal in full view.

“The helicopter tends to be a nuisance for an elephant. You don’t have to be too close to it to be able to herd it.”

He says communication is key between the helicopter and the ground team, to ensure the safety of all, including the elephant.

“And the biggest challenge is, of course, the elephant should not be in harsh and thick vegetation.”

Once it has been darted, Simelane steers the elephant away from any trees. Within minutes the elephant pauses beside a small bushy tree before toppling over. The elephant is in a suitable environment to be worked on and Simelane lands the helicopter. Buss jumps out, joining his team on the ground.

The team comprises full-time veterinary staff and nature conservation students doing experiential training. The procedure takes less than an hour to complete and once anaesthetised the elephant is rolled from its chest to its side for improved breathing. A stick is used to help keep open the end of the elephant’s trunk. An ear is folded over one of its eyes, which helps to keep dust out and prevents it from drying.

The fluid sample is processed by Veterinary Wildlife Services (VWS) and cultured and tested for tuberculosis at Stellenbosch University. A trunk wash is performed and the resulting fluid sample is also processed.

Blood samples are collected from an ear vein for a blood-based TB test, developed by the Animal TB Study Group at Stellenbosch University. Additional blood samples are processed and stored in the VWS Biobank in support of future research projects.

The elephant is monitored until it is fully recovered to ensure that there are no complications. The elephant is slightly tranquillised as a result of the effects of the drug, which can last for up to two hours, but it is fully awake and aware of its surroundings.

Buss said the animals are tested as frequently as possible. However, the number of elephants tested depends on available funds. “It costs approximately R20,000 per elephant. The funds for the research project are the result of a research grant.” The costing is made up of helicopter time, drugs, dart, support vehicles and other operational expenses.

Buss says, unfortunately, in the case of a positive test, elephants can’t be treated: “Treatment is not an option as this would require administering appropriate drugs daily for up to nine months. This has been attempted in US zoos with limited success.”

According to Buss, to date, there has only been the single index case in which human TB has been diagnosed in an elephant in the Kruger National Park.

While it is unclear how the elephant contracted TB, experts suggest the elephant may have gained access to food in nearby communities. DM

A jumbo operation to test Kruger Park elephant for TB