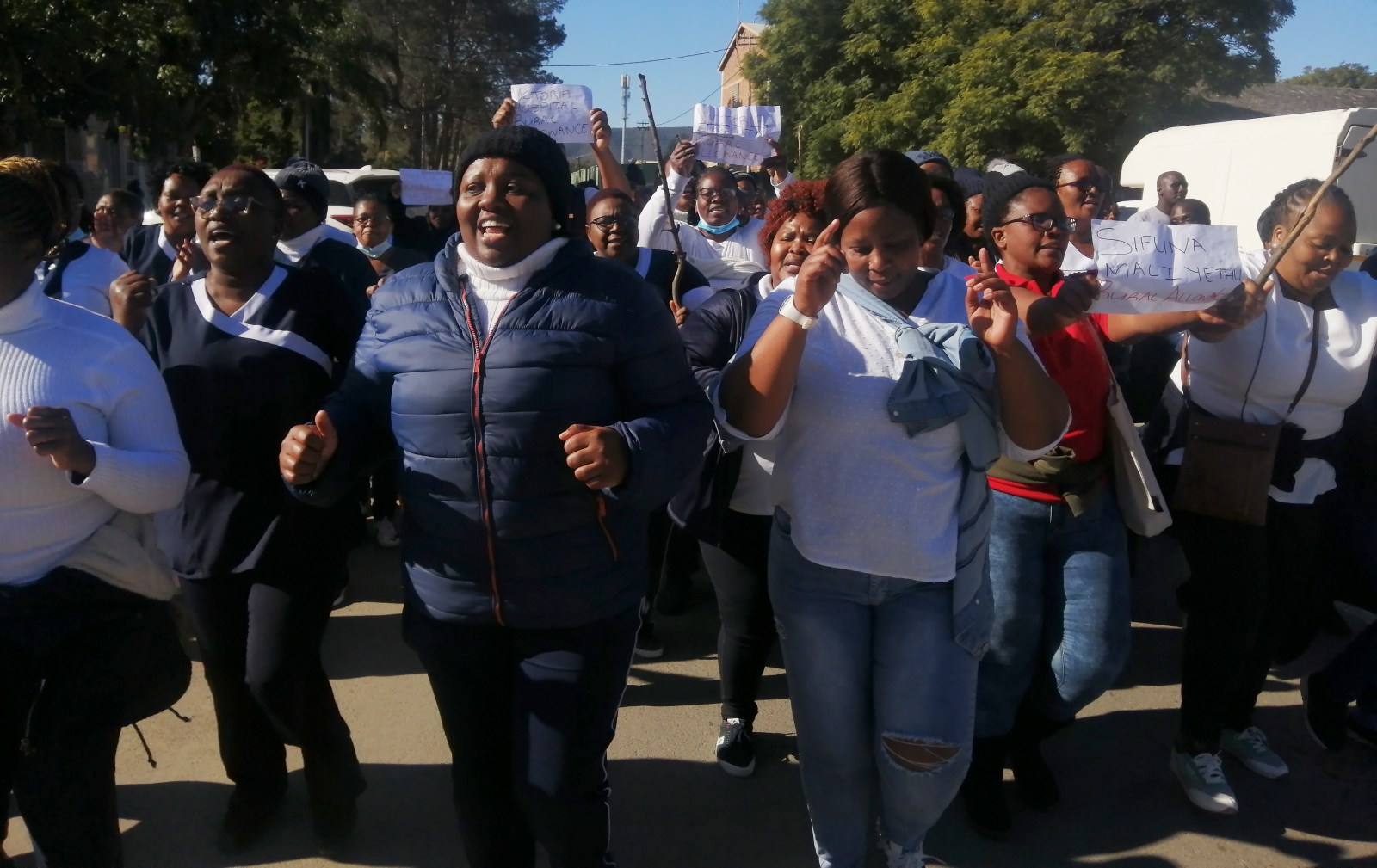 Patients, including children, at six hospitals and clinics in the Raymond Mhlaba Local Municipality left to wait for hours.

About 500 nurses and nursing assistants at six hospitals and clinics under the Raymond Mhlaba Local Municipality in the Eastern Cape protested on Monday, demanding to be paid a R1,200 rural allowance. The protest saw many sick patients stranded at the facilities as nurses downed tools.

The nurses want the Eastern Cape Department of Health head Dr Rolene Wagner to pay them rural allowances which they claim are being paid to some staff nurses in the provinces.

The nurses claim the allowance is part of an agreement made between unions and the provincial health department at a 2019 bargaining council. The allowance was paid to all nurses working in rural areas until it was stopped in 2007.

Now the provincial department says that only the 28 nurses who were named and won in the arbitration matter against the state are due to benefit from the allowance.

At Fort Beaufort Provincial Hospital on Monday, protesters started burning rubbish and wood in front of the main gate. They then marched through the Fort Beaufort town centre and sang, “Sasikwenze ntoni Wagner lento ungafuniyo ukusinika imali yethu?” which means “Wagner, what did we do to you that you don’t want to give us our money?” They have vowed to continue protesting until Wednesday.

According to Thembinkosi Qwakanisa, an enrolled nursing assistant at Victoria Hospital in Alice, representatives met with Dr Wagner in East London on 24 June.

“We told her that there are over 3,000 nurses in the province who are not receiving the rural allowance. We are doing the same job and this wage inequality was demoralising us. It’s also sowing divisions among us and 28 nurses [who are getting the allowance]. But [Wagner] walked out of the meeting and never came back,” he said.

Olivia Ngethu works as a staff nurse at Tower Psychiatric Hospital and has worked in rural areas for 11 years. “We need the rural allowance … The roads are impassable and repairs for our cars hit our pockets hard. I injured my ankle and had to travel to East London to get orthopaedic treatment because there are no specialist doctors here,” she said.

While nurses picketed outside Fort Beaufort hospital, staff nurse Nobathembu told GroundUp that of the 28 nurses, only five reported for duty. When we arrived at midday, she said patients were yet to receive meals and medication.

We also saw about 16 patients waiting to be helped, some with fractured arms and legs, including children.

Patient Nothembile Gxekwa, 82, said she arrived before 8am and was told by a nurse that she had to wait for assistance because most staff were protesting. By 2pm she had still not been helped.

Nombeko Mahlathini from Seymour said, “I left home at 7am and spent R100 to come to hospital for my broken arm. I didn’t get a chance to have breakfast because I was worried about the long queue. My blood pressure has shot up and I’m hungry. It’s almost 3pm and I have to go and catch a taxi back home.”

Dekeda denied that Dr Wagner walked out of the meeting with nursing representatives last Friday. “The executive Management team were addressed by the chief financial officer and director of labour relations on 15 June and again on 24 June. The department head engaged with representatives and the collective bargaining process was explained.

“And the response from the National Department of Health was shared, advising the [provincial] department that the matter was receiving urgent attention,” she said.