Tunisia on the brink: swift action needed to halt democ... 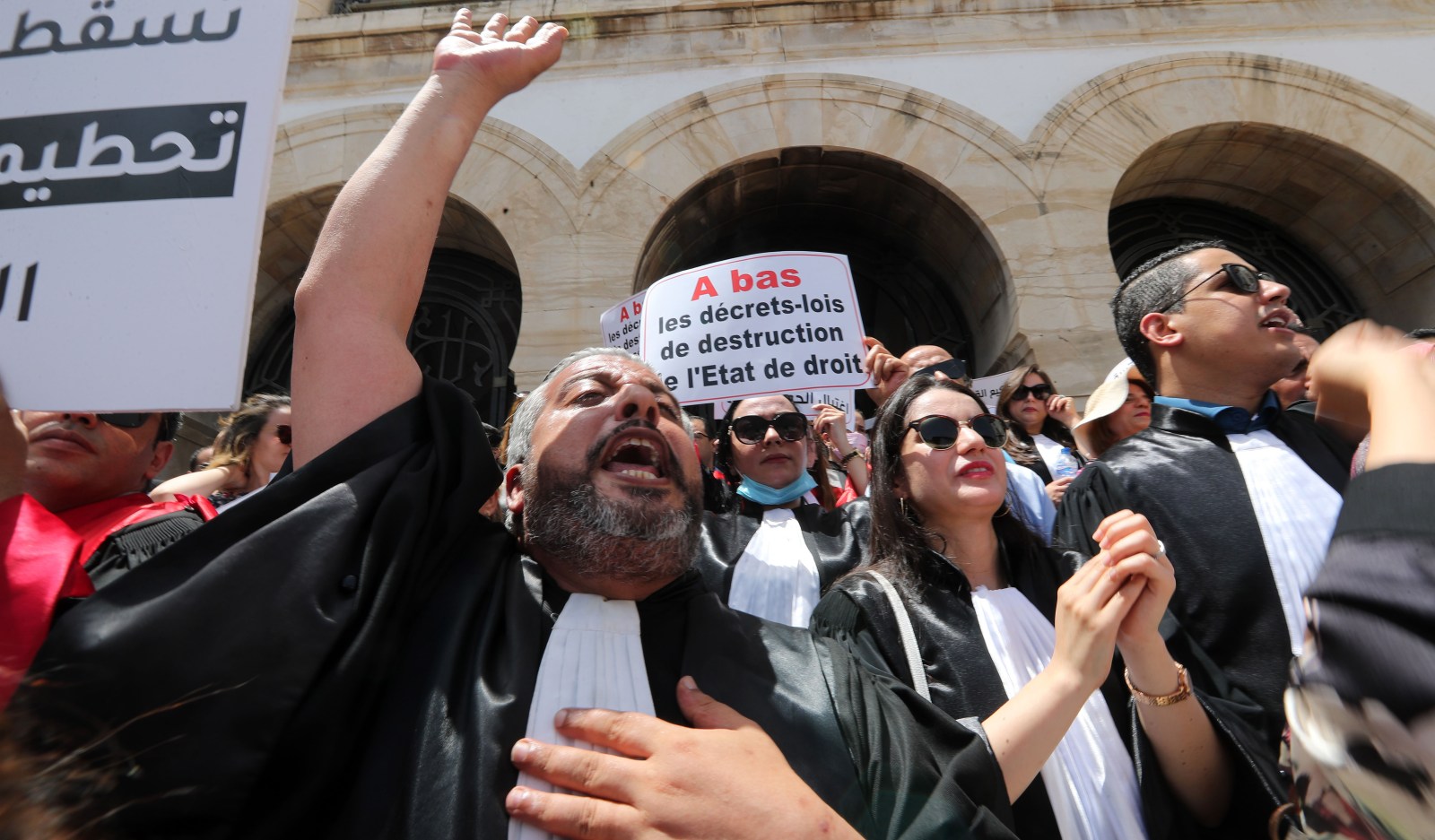 Tunisian judges hold placards and banners with messages in French and in Arabic protetsing against the dismissal of 57 magistrates during a demonstration entitled Day of Anger, in front of the Tunis courthouse in Tunis, Tunisia on 23 June 2022. Tunisian President Kais Saied had taken the decision to dismiss 57 magistrates on 01 June. He has also decreed a constitutional referendum due to take place on 25 July. EPA-EFE/MOHAMED MESSARA

Acclaimed as the success story of the Arab spring protests a decade ago, Tunisia’s democratic transition is now on a precipice. A proposed referendum on 25 July will continue the process of President Kaïs Saïed consolidating his power.

Tunisia will slide further into authoritarianism if nothing is done by the international community – and especially Tunisia’s main allies, the US and the EU before a crucial referendum is held in a month’s time.

Over the past year, protests have been held in Tunisia against rising socio-economic challenges, the government’s mismanagement of its response to the Covid pandemic and the ruling Tunisian elite.

In response to the protests, and rather than facilitating an inclusive approach in dealing with concerns raised by protesters, President Kaïs Saïed started a process in July 2021 of consolidating power in his hands, by dismantling institutions that provide checks to government excess.

He imposed a state of emergency, introduced a ban on protests, dissolved parliament and targeted some of its members.  In early 2022, he dissolved the High Judicial Council – a body tasked with guaranteeing judicial independence; reformed the elections commission and dismissed 57 judges from the judiciary.

With an eye to elections planned for December 2022, Saïed started an online “public consultation” to discuss the state of politics in Tunisia that is planned to culminate in a referendum on a new constitution on 25 July 2022. The new constitution is likely to be used to legalise the actions of the president. Once elections are held in December, the parliament Saïed suspended in July last year will be dissolved.

What has been the response?

Despite the state of emergency and the ban on protests, civil society groups continue to protest against Saïed’s actions and demand that he takes accountability. Some of the largest trade unions in Tunisia have called for an inclusive consultation process that will involve all parties and in which voices of all actors are taken into account.

Over the last few weeks, judges and other members of the legal fraternity have been on strike to protest political attacks on the judiciary. Saïed has responded by further restricting protests and conducting “half-hearted” consultations with selected unions.

What can be done?

If held under the current circumstances, the referendum will be the final action in the consolidation of power in the hands of Saïed. It will effectively thrust Tunisia into authoritarianism.

The implications will be huge for Tunisia and the North Africa region. The President will have control over the executive and the legislature and is likely to target human rights groups and media outlets that raise concerns over his actions, forcing many into self-censorship.

In a region with several totalitarian leaders, such as those in Egypt and Algeria, countries will continue to copy one another and adopt restrictive policies and laws. For Tunisia, the success of the Arab Spring will be wiped away and all democratic gains reversed.

Opportunities for intervention to save Tunisia’s democratic transition will close after the referendum.

The EU and the US should exert pressure now on  Saïed to open up a more inclusive political process ahead of the referendum and the elections. Discussions on providing economic assistance should be held with the condition of restoring democratic institutions and the rule of law and a guarantee of the separation of powers. DM/MC

David Kode is advocacy and campaigns lead at Civicus, a non-profit organisation that aims to strengthen international citizen action and civil society