‘Kuzofiwa’ — a party invitation that foreshadowed... 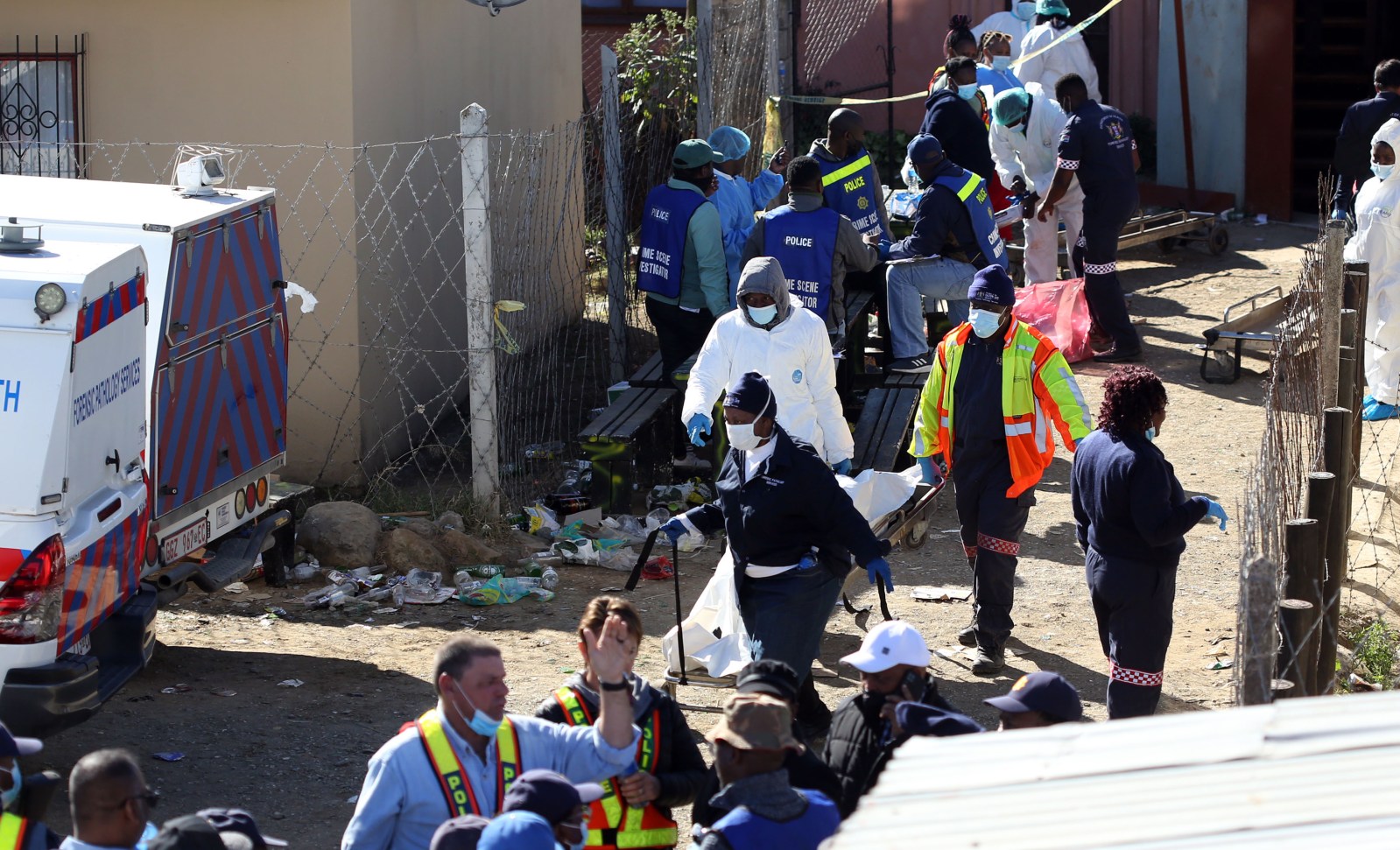 The bodies of the victims of the Enyobeni tavern tragedy in Scenery Park, East London, are removed. (Photo: Supplied)

Forensic pathologists say initial results indicate that the 21 young people — aged between 14 and 20 — who died at a party in East London at the weekend inhaled or ingested something that led to their deaths. National crime scene experts have been sent to the Eastern Cape to help with the investigation into the tragedy that has left the community reeling.

A digital invitation that circulated on Facebook promoting a party at the Enyobeni Tavern in Scenery Park, East London, on Saturday, 25 June, said “kuzofiwa”, which, in a party context, is a slang term for, “It’s going to be a great time”. Its literal translation in isiXhosa, however, is: “There is going to be death”.

The literal meaning of the word foreshadowed the events as 21 young people — aged between 14 and 20 — died inside the popular tavern during celebrations in the early hours of Sunday morning.

The victims’ bodies were found slumped over chairs and couches or on the floor in a circle. There were no signs of visible injuries.

But from initial autopsy results, forensic pathologists suspect the cause of death to be from something they inhaled or ingested, according to Unathi Binqose, spokesperson for the Eastern Cape Department of Community Safety.

He told Daily Maverick the forensic pathologists “said it was something they ingested, possibly from the beers they were consuming, or something they inhaled from those hubbly-bubblies [water pipes or hookahs] that they were smoking”.

Witnesses originally told authorities that the deaths were caused by a stampede, but this has been ruled out. They said the tavern had been packed with people there to celebrate a popular DJ’s birthday, the dropping of mask regulations and the end of exams. There were also people outside, leading to speculation that attendance was in the hundreds.

On Sunday, 26 June, Police Minister Bheki Cele and SAPS National Commissioner Fannie Masemola led a  high-level delegation of crime scene experts and bomb disposal technicians from the national headquarters of the Criminal Record and Crime Scene Management Component. They were there to complement and support the Eastern Cape Crime Scene Investigations teams.

SAPS has ordered the deployment of “maximum resources” as police investigate the circumstances.

“Police do not want to make speculations regarding the cause of the incident as that may risk jeopardising the sensitive investigation that is under way,” said Brigadier Tembinkosi Kinana from the office of the provincial commissioner in the Eastern Cape.

Inquest dockets have been registered for further investigation.

The SAPS in the Eastern Cape confirmed that at least 21 adults and children had died — 17 were found dead on the scene, while four had died in hospital.

Binqose said more information would be revealed by toxicology tests and the post-mortem, but the suspicion is that the deaths are linked to something the patrons had inhaled through hubbly-bubblies, which surveillance footage showed quite a few smoking.

The invitation to the party had specified “hooka” and alcohol would be available.

Kinana said that the incident was reported to the police by members of the community at about 4am on Sunday, 26 June.

People were gathered outside the tavern all day on Sunday, with the SABC reporting that they were demanding that the tavern be shut down as it regularly served minors.

Parents whose children did not arrive home on Saturday night tried to get inside the tavern to see if their children were alive.

So far, 15 bodies have been identified by family members, but the ages of the deceased have not been confirmed as many family members are too distraught to speak.

President Cyril Ramaphosa has expressed his condolences and concern at the deaths in a statement released by his spokesperson Vincent Magwenya.

“The President is, however, also concerned about the reported circumstances under which such young people were gathered at a venue, which on the face of it should be off limits to persons under the age of 18. The President expects the law to take its course following investigations into the tragedy.”

On Sunday, Cele met residents and parents of the deceased at the mortuary in East London, where the process of identifying the victims was under way.

Addressing a crowd at Scenery Park, Cele pointed fingers at the tavern owner, asking why the venue only had one exit and entrance. He held parents to account and questioned why they had allowed their children to be out late on a Saturday night.

After giving his condolences and asking that “no stone be left unturned in uncovering the cause of the tragedy”, Eastern Cape Premier Oscar Mabuyane called for greater parental and community involvement as well as for vigilance in monitoring not only taverns and nightclubs, but the maintenance of general law and order in their communities.

“We call on parents and legal guardians not to abdicate their responsibility to their children or minor children entrusted in their care,” Mabuyane said.

“We are saddened by the loss of young lives, future leaders of our country, future breadwinners for their families, and for all the investments made by their families in them that now have evaporated in an instant.” DM