Junior Bok victory over England ticks a box, but coach... 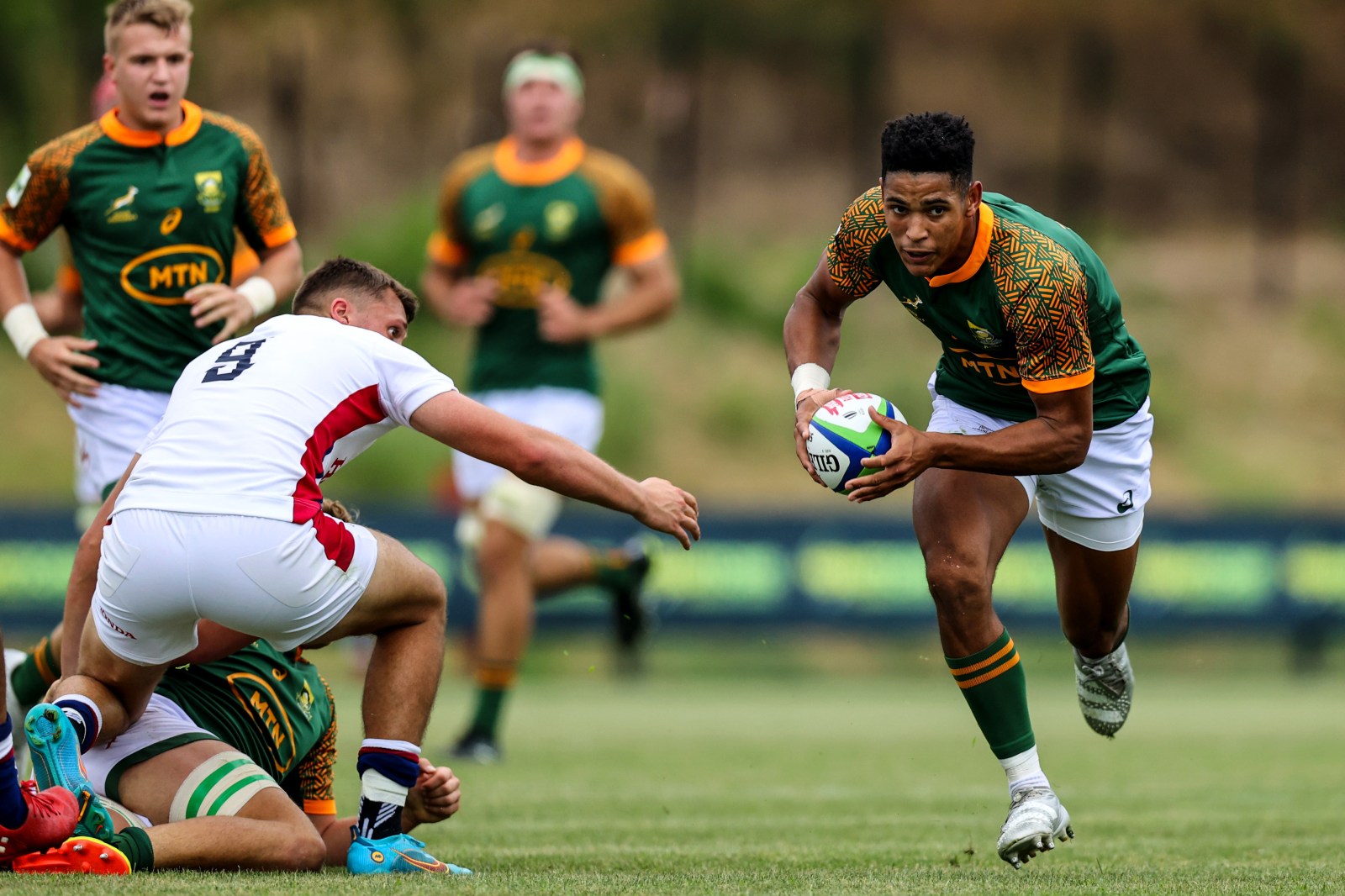 Junior Bok captain Sacha Mngomezulu finds a gap during a Six Nations Summer Series pool match against England in Verona, Italy on 24 June 2022. The flyhalf praised his team's quality and the depth after they triumphed at the tournament. (Photo: ©INPHO / Ben Brady)

The Junior Springboks made a winning start to their Six Nations Summer Series campaign, but will need some big improvements for their next outing against Ireland.

South Africa head coach Bafana Nhleko feels there is far more to come from his side after their Six Nations Under-20 Summer Series win against England.

The Junior Boks set the tempo for a breathtaking contest on Friday, 24 June, with a try inside three minutes as flyhalf Sacha Mngomezulu’s inch-perfect cross-kick fell perfectly for wing Suleiman Hartzenberg.

A further four scores followed as Nhleko’s side triumphed 30-22, in what was their first international fixture for nearly 12 months.

“First game for some of our boys, so we’re quite happy with the win,” he said.

“You could see it was our first game and you could also see it was England’s first game. We were a bit rusty in many ways and the important thing was just to get through the game and we are quite happy with the win in itself.

“Performance-wise we were not quite where we needed to be, and it’s not being harsh or critical, there are lots of things that we could do better and that’s part of the learning curve for the boys.”

Flyhalf Mngomezulu delivered an eye-catching performance at flyhalf, opting to kick in the early stages as South Africa settled into the contest before a more expansive and aggressive running game took shape.

He looked like a player brimming with confidence, having played a key role in the Stormers’ United Rugby Championship title success, most notably in their quarterfinal triumph over Edinburgh.

“It’s a bit early to give away the secrets, but we know what he’s capable of,” said Nhleko, discussing his captain’s superb early kick assist.

“The biggest thing for the boys in this game, which I’m quite happy about, is that any kick is only as good as the chase, and I thought the chase from Sully (Hartzenberg) was pretty good and that gave us a bit of belief in the game.”

Mngomezulu’s next brief is to lead his side against Six Nations champions Ireland on Wednesday.

Nhleko insists that his team can raise their game as they look to make it two wins from two and set up a potential group decider with France.

“It doesn’t get any easier, with the top two in the Six Nations, so that’s going to be tougher,” said Nhleko.

“What’s important for us is how we recover and get ourselves up mentally for the next one.

“I think the boys now know the level that’s required for them to perform here.

“We saw in today’s game that if you don’t take your opportunities you suffer, if your discipline isn’t there you suffer. So there’s a couple things we need to sharpen up on.”

In an arm wrestle of a first half, Koevort proved the difference and played a crucial role in setting South Africa on the path to victory.

His pre-assist for scrumhalf Nico Steyn’s score came after a scintillating bit of footwork and he was involved again in the build-up to No 8 Cameron Hanekom’s score at the start of the second period.

While Mngomezulu was perhaps more eye-catching and daring on the ball, Koevort provided control, both in attack and defence, steering his side to victory in a game decided by fine margins.

If Mngomezulu’s cross-field kick is a sign of things to come over the next two weeks, then rugby fans are in for a real treat.

Just four minutes into the opening game of the tournament, the flyhalf’s pinpoint kick, which seemed destined to bounce into touch, ballooned off the Payanini Center turf and into the grateful hands of Hartzenberg.

Whether it was deliberate or not, it was a touch of genius and certainly gave Mngomezulu the confidence to try to dictate proceedings with his right foot.

Moments later he tried an audacious drop goal from some 40 metres out and had pulses racing in the stadium with each step and pass he attempted.

Steyn’s audacious pass between his legs prompted just as many gasps from the stands and might have had the edge over Mngomezulu’s nudge had it led to a try.

With South Africa growing into the contest midway through the first half, No 8 Hanekom seemed to have turned pressure into points

But after a thorough look at the pitchside monitor, referee Eoghan Cross disallowed the try. Steyn was deemed to have blocked a potential tackle attempt.

The cocktail of an anxious wait, confused crowd and suspenseful music as Cross considered his decision recreated a scene familiar to fans of many Premier League football clubs.

But the verdict only stirred the South Africans, who were determined to capitalise on their dominance having worked so hard to turn the tide after England’s bright start.

Steyn’s try on the stroke of half-time gave the Junior Boks the momentum going into the second period, and that was the boost they needed to assert themselves after the break.

Arguably it was a case of not one defining moment, but two in this match.

With the clock ticking down in the first half, Donovan Don stepped his way through the England backline and after a delayed pass from Koevort, Steyn had the simplest of finishes.

Their next score, five minutes into the second half, was a carbon copy. Koevort and Don were again involved, running from deep, before Mnogmezulu teed up Hanekom to gallop home.

Those 10 points on either side of half time took South Africa out of reach and left England with too much to do in the closing stages. DM