According to Zondo: Insider accounts of what went down at key moments in the capture of the state 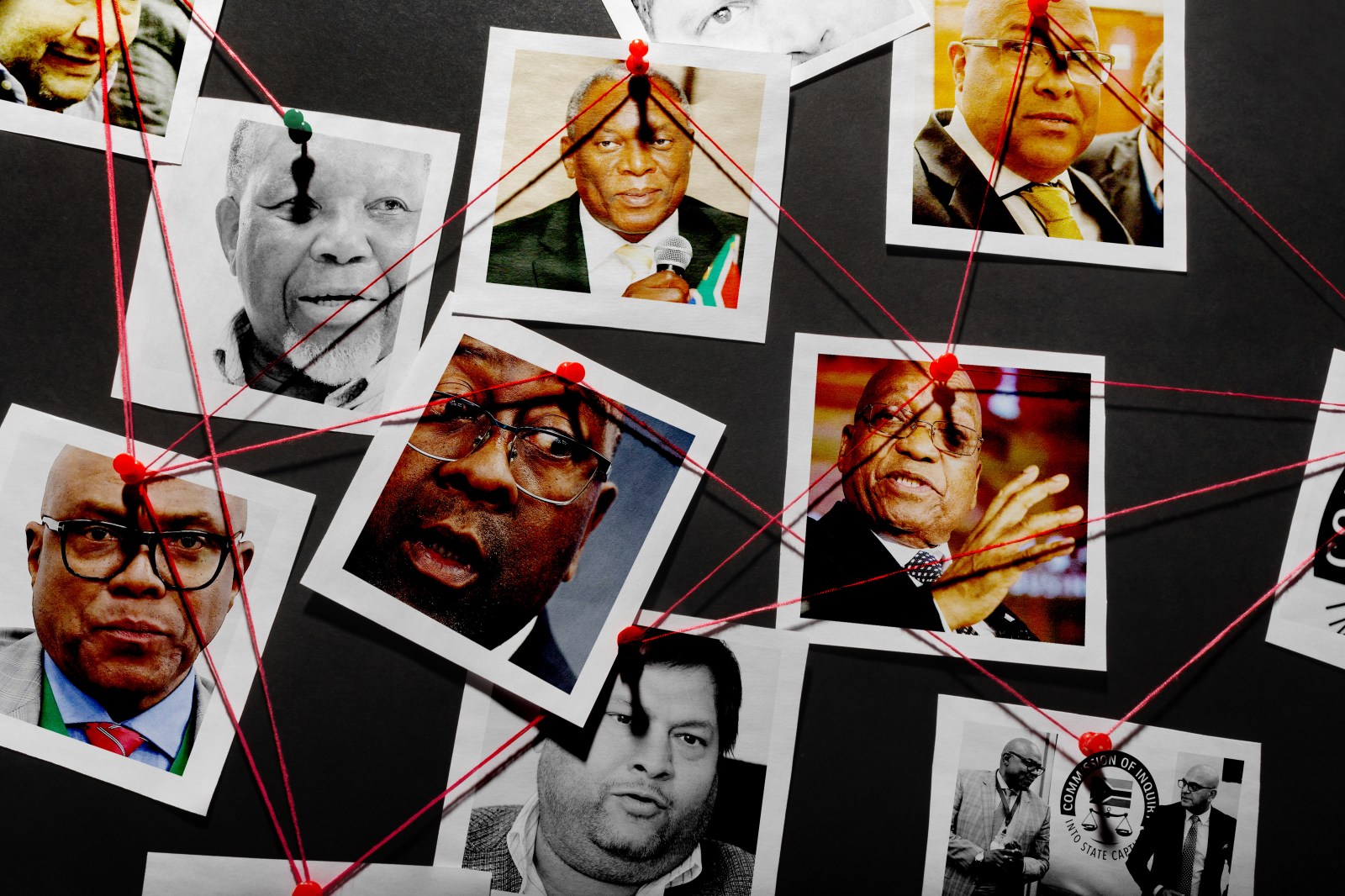 In 2010 — the year of the Fifa World Cup — at a meeting between Jacob Zuma and his head of foreign intelligence, Mo Shaik, the president barely flinched at the pertinent issues his top three — Shaik, SSA DG Jeff Maqetuka and domestic head Gibson Njenje — had raised earlier about their investigation into the Gupta family.

It was this investigation, the State Capture Commission has found, that could have halted the silent coup long before it drilled deep into Zuma’s administration and brought us to this place, right here, right now.

“The president did not address the pertinent issues or the grounds for the investigation as advanced by the top three: he did not apply his mind to the National Security issues, namely the peddling of information which implicated his office,” reads the report.

The spy bosses had wrongly assumed that Zuma would grasp the seriousness of the matter — after all, he had been head of ANC intelligence in exile. But the president did not address the facts placed before him.

After the meeting, Shaik continued in his position for a few more months. During this time, his relationship with State Security Minister, Siyabonga Cwele, deteriorated. Cwele cut Shaik out of the comms loop.

Then came an offer — Shaik should go to Japan as ambassador.

However, Shaik wasn’t in favour of this proposed deployment as “there had just been an earthquake and a nuclear disaster”.

Later, at a meeting with Zuma, Canada was mentioned as an option as Shaik’s wife was Canadian.

A short while later, Shaik was called by the DG of the Department of International Relations and Cooperation, Jerry Matjila, asking if he would accept a posting to the land of the maple leaf.

“He put the phone down, shocked because, according to him, it was an indication that it was former President Zuma who wanted him to leave the intelligence services as he had not discussed the matter with anyone else,” the Zondo report found.

Shaik ultimately declined the offer and resigned in 2012.

Njenje was offered the post of “Ambassador in Africa”, but also declined.

After he had left his position, Ajay Gupta called Shaik, informing him the Mail & Guardian was planning to report that the [Gupta] family had been behind Shaik’s resignation. He told them to go where the sun doesn’t shine.

In March 2016, Gwede Mantashe, then ANC secretary-general, received a memorandum submitted by “senior commanders and commissars of the former military wing of the ANC, uMkhonto weSizwe, including General Siphiwe Nyanda”.

This memorandum referred to the removal of Nhlanhla Nene as minister of finance and his proposed redeployment to the Brics Development Bank.

It would not have been possible for Zuma to impose Nene as the regional head of the bank and the former president’s attempt to appoint Nene as regional head “showed a lack of proper understanding of how the new Development Bank would work or be set up”.

This, said Zondo, was a “ridiculous excuse” to fire Nene.

The memorandum to Mantashe had been “well received”, and that was the end of that.

Gibson Njenje, on appointment as domestic head of intelligence, had been instructed by Cwele to investigate the Principal Agent Network (PAN) within the SSA, which had been gobbling up millions.

The investigation established that the PAN was a personal and highly irregular project run by then deputy director-general Arthur Fraser. Njenje said he reported back to Cwele regularly, the more he found.

While the investigation was in motion, Fraser resigned.

The investigation had found the illegal acquisition of properties, vehicles and the employment of family and relatives as “agents”.

Cwele’s interest in the investigation suddenly waned, leading ultimately to a total breakdown in the relationship with Njenje.

Cwele had informed the intelligence heads that “the investigation into the Guptas should stop because he felt it would amount to investigating the then president, namely Mr Zuma”.

The three pushed back, saying they were seeking to help Zuma and the executive “to know better how to deal with that family”.

An investigation into the funding of the purchase of the Shiva Uranium Mine by the Guptas — who had “involved other people from India and Pakistan” — was proposed.

Also to be investigated were illegal sales of South African technology to some of those countries.

Cwele’s view, which he had “expressed forcefully”, was that investigations should not lead to the president.

This was after Mtshali and Luhlabo had been summoned to Saxonwold by Ajay Gupta, who informed them that he wanted a 90% stake in ICT.

Ajay had told the duo that he was “the only person with the financial muscle and political backing to get the prospecting rights”.

Earlier, advocate Sandile Nogxina, DG of the Department of Mineral Resources, had recommended that the Motlanthes give Njenje a call.

By the time they reached him, they were both extremely hot under the collar at the news that ArcelorMittal, a mining company with a 21% stake in Sishen Mine, was how the Guptas were circling the ICT slice.

The Sishen rights expired on 30 April. Sishen Iron Ore (a subsidiary of Kumba) and ICT had applied for these mining rights, which had been awarded in 2009. The legality of the award was subsequently challenged.

Ultimately, ICT sold 50% of the rights it had acquired from Sishen Ore to a company known as JIC Mining Services, in which Zuma’s son, Duduzane, and the Guptas, had an interest.

When Njenje spoke to Nogxina, he was “in London with President Zuma at the time”.

In effect, the DG was asking Njenje to get Mtshali and Luhlabo to surrender their shares to the Guptas.

“He said he himself was under pressure from the president in London.”

It was eventually agreed that a visit to the Guptas might help.

“The trio went to the Guptas’ place and met with Ajay Gupta there.”

Ajay had suggested that Mtshali and Luhlabo keep 10% and give the Gupta/Zuma entity 90%.

The deal did not look good to Mtshali and Luhlabo, who “became emotional” and “even mentioned that the Guptas were foreigners”.

It appears to have become even more heated, with Mtshali and Luhlabo “at times shouting at him and reminding him he was a foreigner… that he could not just come and grab”.

Eventually they conceded to “giving away” 50%, “but for no payment”.

When Njenje confronted the Guptas about their behaviour, “Mr Gupta said he understood and promised to stop harassing people and would talk to his brother”.

By 2011, Njenje and his team had made considerable progress in exposing corruption within the SSA’s Principal Agent Network — Fraser’s personal project.

The report was handed over to the DPCI and the NPA “and everybody was ready for prosecution”.

All in all, investigations found that around R600-million had been spent on vehicles, houses, warehouses and various other schemes designed to siphon off money.

Just after meeting with law enforcement agencies, Njenje received a call from Cwele asking him to meet at OR International Airport.

“When they met, Minister Cwele said that the prosecution of Mr Fraser must stop. Despite Mr Njenje’s protest that a lot of time and money had been spent in investigations, the Minister insisted and said it was President Zuma’s decision.”

At the time, Zuma had warned that prosecuting Fraser “would compromise national security”.

Cwele later offered Njenje “a diplomatic posting” to Rwanda — “at the insistence of the president”. He declined.

As it turned out, Zuma needed Fraser down the line to open the prison gates when, as outgoing Commissioner of Correctional Services, Fraser granted Zuma an illegal early medical parole.

Daily Maverick will continue to publish nuggets as we work our way through the report. DM