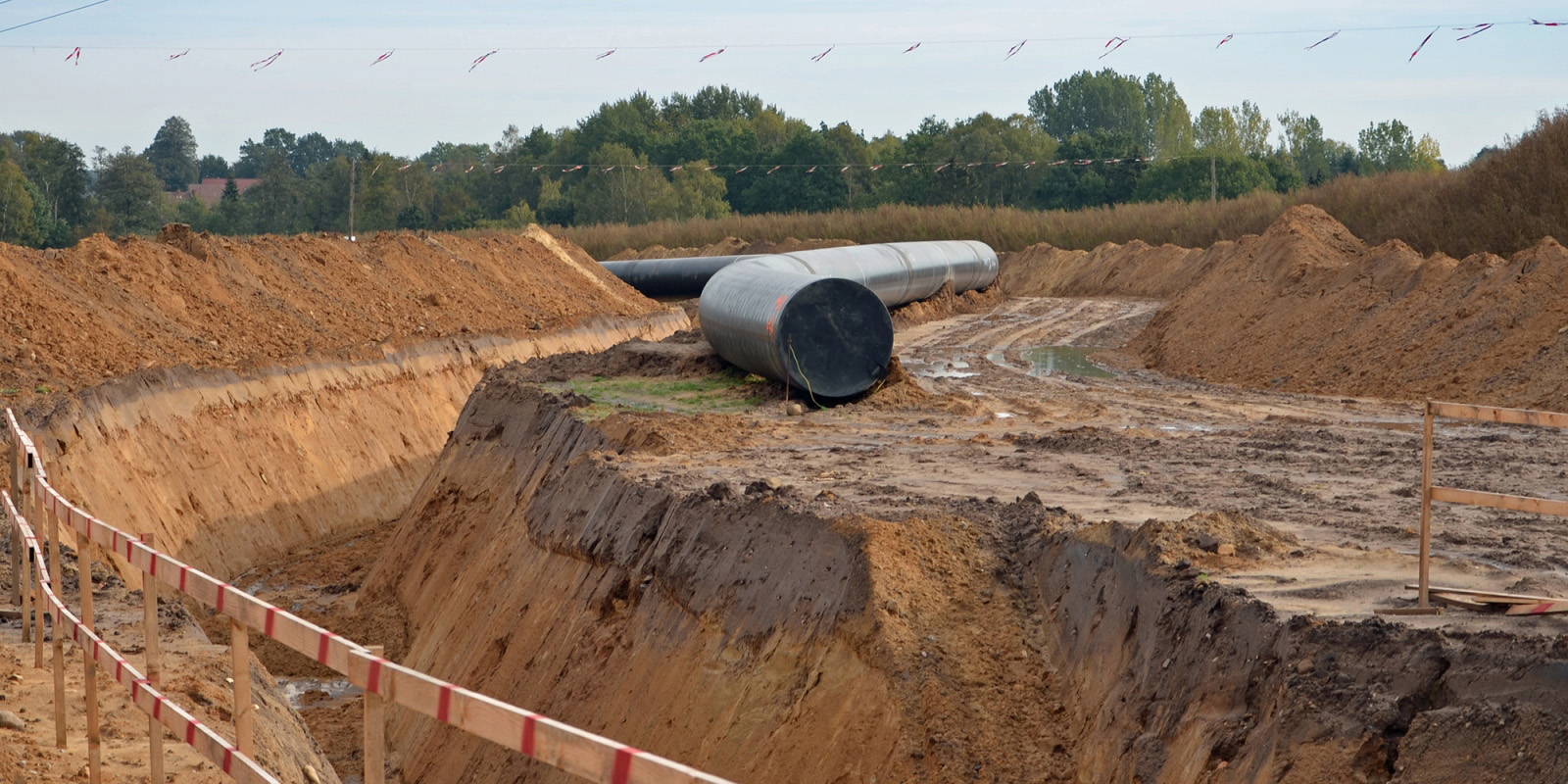 Building new pipelines and other gas power infrastructure could lock South Africa into propping up a dying industry artificially, despite the availability of cheaper and cleaner energy alternatives. (Photo: Wikimedia)

Large-scale gas use for power generation is central to energy policy direction in South Africa, but this policy rests on an outdated 2012 vision. The only economically rational role for gas in power generation is now as a fuel for peaking plants – a small, intermittent but crucial role currently provided by diesel.

Liquefied natural gas (LNG) can replace diesel for some of the fuel requirement at some of the peaking plant sites, but due to practical, contractual and security-of-supply reasons LNG can only account for about half of the 25PJ to 40PJ (petajoules) peaking fuel required per annum by 2030. Given these realities, embarking on a large-scale gas-to-power strategy creates significant economic and environmental risk.

South Africa’s Gas Master Plan (GMP) relies heavily on the prospect of gas-to-power projects providing “anchor” demand to feasibly grow the domestic gas market. The GMP is based on the vision of the National Planning Commission’s 2012 National Development Plan (NDP), which sees gas as a clean, viable replacement for coal in power generation.

However, the 10 years since the NDP was published have seen unprecedented changes in both the cost of clean-energy alternatives, and the global decarbonisation imperative. In 2012, wind and solar power was 50% more expensive than large-scale power generated from gas, but by 2021 the economics had flipped completely, with gas power now almost treble the cost of renewable energy.

Additionally, in the 10 years since 2012, South Africa’s remaining carbon emissions space has halved. Not only has emission-free power generation become the cheapest, but use of any fossil-fuel technology now brings penalties into the future. Energy policy and planning that do not integrate these new economic and environmental realities will fill the power system with stranded assets and create climate risk for all electricity users.

Independent analysis of the power sector across a number of recent studies shows that South Africa’s power needs can be met both now and in the future with very little use of gas. All studies show that the overwhelming majority of new generation capacity should be wind and solar, with an increasing requirement for flexible (dispatchable) capacity to support this. There is no evidence to support the large-scale gas envisaged in the GMP; this is uneconomical even before carbon emissions are considered.

The flexible capacity required consists of gas turbines or reciprocating gas engines and could run on a variety of fuels such as diesel, gas or other combustible substances. While significant flexible capacity is required (3GW existing plus 5GW new by 2030), all modelling shows that its role is a standby or peaking function. This role sees the generators stand idle for most of the time (with capacity factors of 3% to 5%), requiring relatively little fuel over the course of a year (25PJ to 40PJ per annum by 2030).

The existing 3GW peaking capacity uses diesel, which could also be used to fuel all new capacity. However, diesel is expensive, with high carbon emissions (only 15% lower than coal-fired power). The opportunity for gas in power generation is thus as a fuel for low-utilisation flexible capacity, in situations where it can displace diesel at a lower cost and with lower or comparable emissions.

Read in Daily Maverick: “An effective roll-out of renewable energy could have prevented 2021 load shedding and saved billions – report”

With the question of gas in the power sector refined, the economic and environmental case for LNG to replace diesel as the fuel for both existing and new peaking capacity was evaluated, focusing on the current decade and imminent decisions on LNG infrastructure.

Use of LNG requires some form of terminal infrastructure to receive parcels of gas from ships regularly. Whether land-based or floating storage and regasification units (FSRUs) are leased or bought, the provision of this infrastructure carries a large annual fixed cost component.

Thus, the viability of LNG depends heavily on annual volume throughput at each terminal. LNG as a power fuel solution is therefore suited to a fuel generation plant  that runs most of the time, at high capacity factors (50%+), consuming large quantities of gas with a steady, predictable offtake pattern – exactly the type of generation role that modelling studies show is not economical in the South African power system.

When the fixed costs are borne by limited volumes, as are associated with the peaking plant role required by the South African power sector, LNG becomes uncompetitive with diesel. It is only if non-power demand (ie synfuels or other industrial volumes) through the same FSRU can provide sufficient additional offtake, that LNG becomes a serious economic alternative to diesel.

However, some practical issues also reduce the scope for LNG to replace diesel as a peaking fuel. Existing peaking plants are scattered across the country at four separate locations, and new peaking capacity is likely to be located at a fifth or sixth location. The gas volume required at different sites cannot be aggregated and supplied economically through the same FSRU, since this would require some form of more expensive containerised secondary distribution that would threaten the saving against diesel.

The realistic scope for peaking plants to use LNG is thus predominantly for new capacity only, sited at Richards Bay or possibly inland at Komati or other old coal power stations. These sites appear to provide the earliest opportunity for non-power users to provide the necessary “anchor demand” to render LNG viable for peaking. Until then, new peaking plants at these sites would be more economically fuelled by diesel.

Once sufficient non-power demand exists for LNG to compete with diesel at any site, LNG could provide some but not all of the peaking power requirement. Peaking plant fuel offtake is both variable and unpredictable and, increasingly, will be characterised by long periods of minimal or zero use as renewables and battery storage provide for daily demand cycles. LNG contract norms require predictable, steady offtake fed by scheduled replenishment vessels with take-or-pay terms.

Erratic use as characterised by peaking plant needs is fundamentally incompatible with these norms, requiring LNG use to be limited to what will definitely be needed between replenishment cycles, with the balance of generation done by diesel. The opportunity for LNG to replace diesel is thus estimated to be in the range of 11PJ to 18PJ per annum by 2030, but only if non-power demand at each site is sufficient to materially defray the FSRU cost. Without “anchor demand” from non-power sectors, there appears to be no economic case for replacing diesel with LNG as a peaking fuel.

A question remains as to what would be the impact on the economy if the current trajectory of energy policy and planning remains unchanged, using high-volume gas-to-power projects to create “anchor demand” for gas in other sectors?

Given that the most economic use of gas in power is at much lower volumes, forcing high-use gas into the power generation mix will merely increase the cost and emissions from power generation. Calculations place this cost premium at 40% or more compared to the alternative combination of peaking plant and renewables, with sevenfold higher carbon emissions for the same generation, while greatly exposing electricity pricing to volatility in global fuel and currency markets.

Furthermore, accounting for planned revisions to the domestic carbon tax, the cost premium will rise above 60% by 2030. Impending international border tax adjustments and other measures implemented will see all exports from South Africa penalised by the higher emissions.

With no economic rationale for large-scale gas use in power, following such a strategy would deliver assets that are stranded before their first kilowatt-hour of energy is generated. The analysis finds that the economic role of gas in the South African power sector is small, and its viability depends on “anchor demand” from other sectors. A reassessment of what appears to be the current energy policy direction is therefore strongly recommended before committing to any use of gas in the power sector at all. DM

This is the Executive Summary of a Study Report by Meridian Economics. Download the full report here.