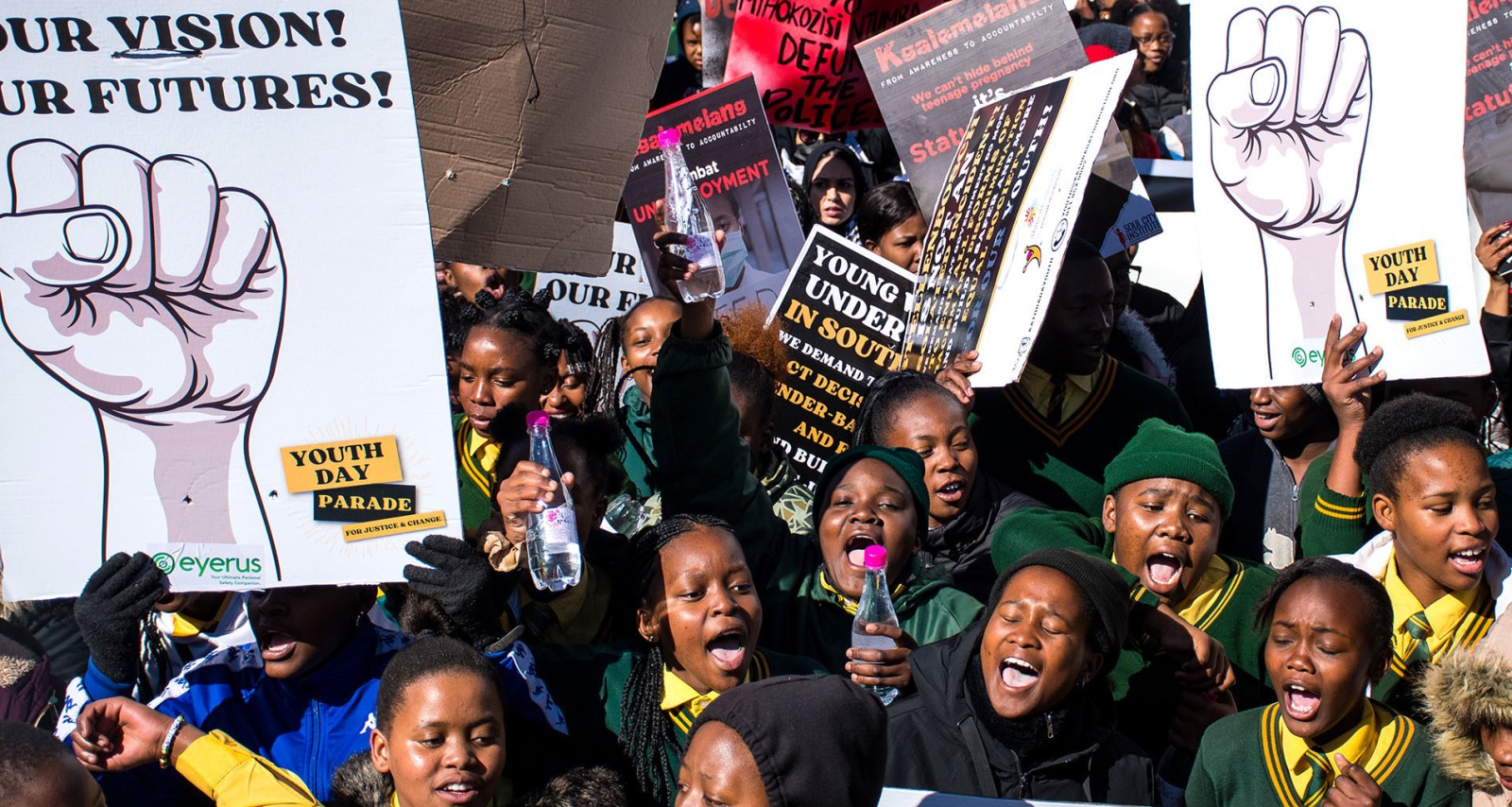 Young activists who took part in the youth parade on 16 June understand how the climate crisis affects all other social-justice issues. But they say such climate consciousness is not apparent among the rest of their generation – with less than half of the population knowing what climate change is.

Read more about the parade and demands here: Young people march to Union Buildings to present demands for a better future

Much of the youth in attendance understood the importance of climate change being included in their memorandum of demands, explaining that climate change is interlinked with many other social issues – affecting people’s access to food, water, education and infrastructure.

Gen Z has been (although often satirically) dubbed “the woke generation” – very aware of and actively campaigning for social-justice issues.

But, despite the hundreds of young people in attendance on Thursday being aware of the social implication of climate change, the majority of South Africans are not climate literate, which leaves them even more vulnerable to the impacts of the climate crisis.

Gabriel Klaasen, coordinator at the  African Climate Alliance (ACA) said the way to increase climate literacy and get communities to care about the climate crisis when they have so many other social issues to deal with is to illustrate how social justice is climate justice.

“If you paint that picture and say, hey, that’s actually because of climate change, it becomes a lot easier for communities to understand,” said Klaasen.

Referencing the study, youth commissioner on the Presidential Climate Commission Ayakha Melithafa said, “That tells us a lot about our education system.

“And it means that now, as young people, we have to start educating ourselves. We can’t really rely on our teachers to equip us with skills and knowledge around climate change and how urgent it is.”

Grade 11 student Otsile Nkadimeng agreed, telling Daily Maverick at the youth parade, “You’d expect I’d learn it from school, but the education system failed to effectively tell me about the climate crisis.”

Nkadimeng said he learnt about the severity of the climate crisis “by coincidence” when attending a Model UN conference hosted by the SA Institute Of International Affairs youth programme when he was in Grade 8.

“I remember being taken aback, thinking, wait, so there’s this crisis that’s threatening my future, this crisis that could essentially cause the planet’s sixth greatest mass extinction. How am I only finding out about this now? What are we doing about it?”

Nkadimeng, who is part of the Ahmed Kathrada Foundation’s Youth Policy Advisory Forum on Environmental Justice, added,“If the education system isn’t telling us about this, if we’re not learning about it, we can’t do anything about it.”

Mitchelle Mhaka, 0perations and programmes coordinator for youth climate activist organisation ACA, said at the parade she thinks more affluent youth in South Africa have a general understanding of what the climate crisis is and its severity, but not the majority of the youth population.

“The rest of the youth, I think they can feel the effects and are even having conversations around it like, it’s too cold, it’s too hot, it’s flooding. But not necessarily linking it to the concept of climate change.”

Mhaka said one of the problems within the philanthropic and policy-making space is that communities are instructed what to do, instead of the government collaborating with them and co-producing solutions.

Intersectional youth activist Raeesah Noor-Mahomed agreed, saying, “Activism tends to be very exclusive. We always assume that people don’t know what climate change is. But maybe they just don’t know the words we use … because they live in it.”

Surveys conducted for the Afrobarometer study reflected that, despite the African continent being the most vulnerable to the effects of climate change, it is not the most important issue to Africans.

But issues that are of importance, like water supply (cited by 24% of respondents), food shortages (18%) and agriculture (17%), are linked to the climate crisis.

The memorandum of demands presented to government was quite broad – demanding rights to education, employment, action on gender-based violence, healthcare and transparency in government – but had a strong focus on climate justice.

Courtney Morgan from African Climate Reality Project, who contributed to the memorandum of demands, told Daily Maverick including climate was a “turning point for youth activism – that climate is not separate from social justice”.

Morgan added, “For me, this is a really good example of what more protests should be like, because all of the issues we talk about are intersectional – you can’t talk about climate justice without talking about women’s rights, or even access to education, infrastructure, basic care.”

Mhaka agreed saying, “The most important thing [about the memorandum] is for the government to realise they can’t be trying to solve all of these problems in isolation, because they’re all so linked.”

Nkadimeng, whose role included bringing youth organisations together to engage with the memo, said it was important for people to understand that climate justice was not just about climate change.

“Climate justice encapsulates all the issues that impact society. And the memorandum was a very good example of that.”

The memorandum demands sustainable, green jobs, which can help tackle youth unemployment and contribute to the just transition away from fossil fuels.

The Afrobarometer study said, even in some of the most politically and socially influential African countries, like South Africa, only about one in four citizens have a basic awareness of climate change, “suggesting that climate-change activists have their work cut out for them in building a popular consensus for action on the issue”.

Mhaka said this illustrated that people don’t have access to resources that can educate them about the climate crisis, which they need to be able to engage with leaders and better prepare themselves for climate disasters and food and water shortages.

Mhaka runs educational workshops at ACA, and Grade 9 pupil Tahirah Naicker who has attended them said they help to educate youth and make them take the climate crisis seriously.

Melithafa said the fact that the youth have to join grassroots organisations to learn about climate change is not good.

Asked if she had a message for the youth, Mhaka, an activist for three years, said, “You’re still going to need to march, probably next year, probably five years to come.

“But that should never stop you … because we know that when we get the demands that we want, it simply means that the rest of the country does. And we’d be setting a very good example for the rest of the continent.”

“So if, as the youth, we stay united, continue the fight and don’t let party politics or racial lines divide us, we can do something.” DM