Organised young people are the enablers of a just educa...

Organised young people are the enablers of a just education system 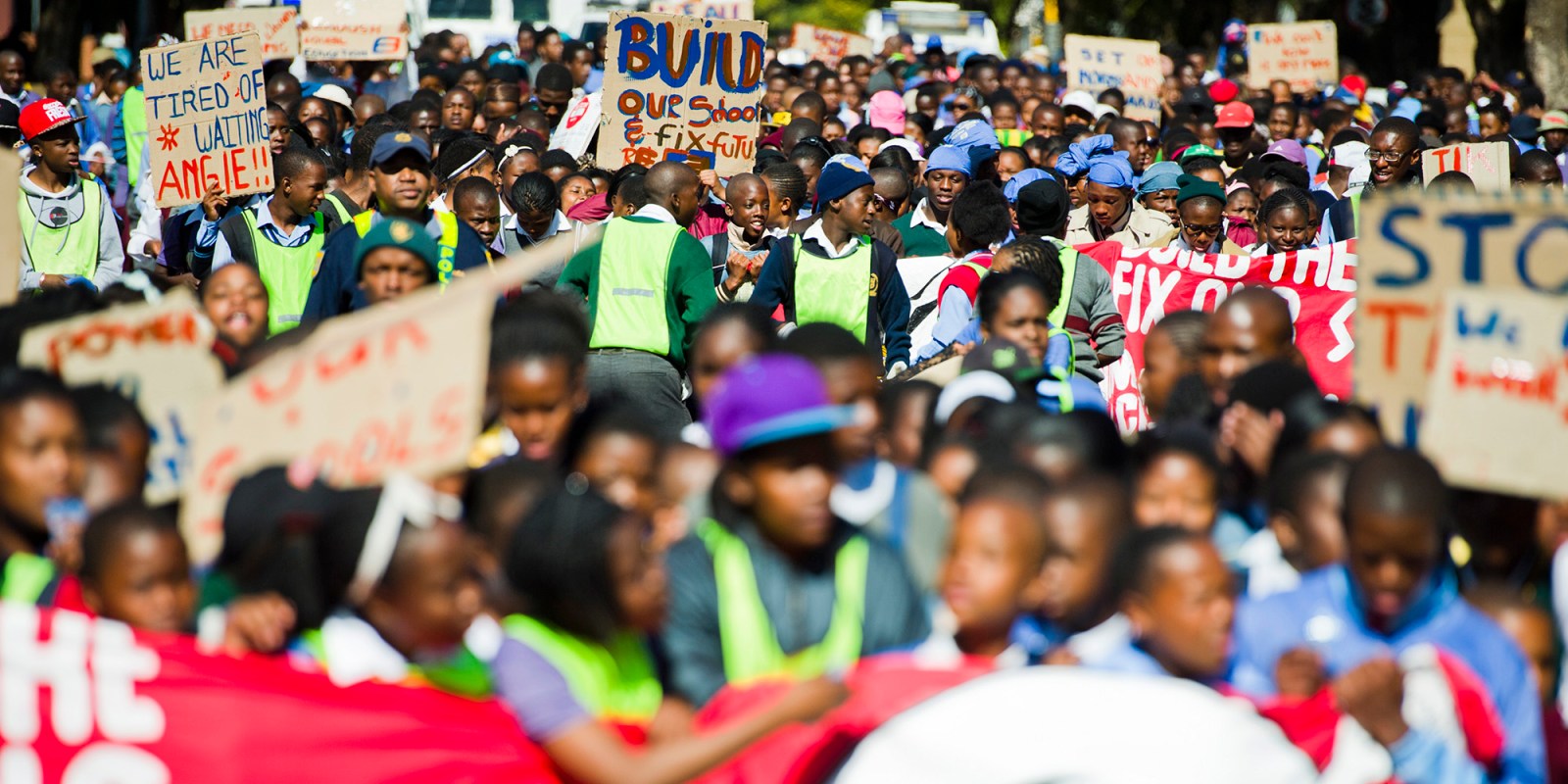 The capacity of young people to organise is a tool for liberation in South Africa’s communities. Young people have long played a key role in the fight for a just education system and society.

On 17 June 1976, learners came together in Tembisa, a township on the East Rand, to march in solidarity with Soweto learners whose uprising was changing our country.

In 2012, 36 years later, Equal Education (EE) members — most of whom were learners — were inspired by the activism of their predecessors as they marched that same road at the beginning of the struggle for decent school toilets in Tembisa.

A year after that, the power that we as young people have to force positive change for the schooling system was proven when the basic education minister was pressured to adopt a historic school infrastructure law that binds the department to provide basic infrastructure to all schools.

But as we commemorate the lives of the class of ’76, many of whom died fighting for quality education, and we appreciate the victories of the youth of today, we are painfully aware that we are “not yet Uhuru”.

For the promises of free quality education and healthcare, or jobs and land, to be fulfilled, ordinary people must protest, go to court or even lose their lives. Those who are too young to vote feel powerless to change their circumstances, and many young people who can vote don’t, because they are disillusioned with democracy.

Our generation is still faced with an unequal education system; with inferior standards of education for many poor and working-class children. Pit latrines have not been eradicated from all schools. Too many classrooms are overcrowded, too many children must walk long and dangerous distances to school, and too many schools are unsafe environments.

The Covid-19 pandemic has exacerbated inequality in our education system and in our society. The closure of schools in early 2020 cut learners off from teachers, friends, guaranteed daily meals and mental health support. The Covid-19 Social Relief of Distress Grant did not do enough to soften the blow for parents and older siblings who lost jobs.

While the lockdown restrictions did not allow us to be out in the streets in numbers, the organising of young people became more important than ever, as the status quo was worsened by the pandemic, austerity measures and bad governance in general.

Being a mass-based movement meant EE was in the unique position of being able to hear directly from our learner members (Equalisers) from across South Africa, about how the pandemic was affecting their learning, their physical and mental wellbeing, and their families. These learners were able to go on TV and radio to tell the country about their experiences. Those experiences and testimonies became letters and submissions to the government.

Our #SchoolMealsNow campaign, through which we got the education departments to open up access to food while schools were closed, combined court action with small, creative protests, as well as powerful insights from online surveys of Equalisers from across South Africa.

Later, when schools began to reopen, EE was again able to hear from Equalisers directly on whether their schools had the essentials such as masks, sanitiser, water and working toilets. We were also able to hear how they felt about being back at school.

This information was vital for us (together with the Equal Education Law Centre and SECTION27) to convince the Department of Basic Education to change some of its policies related to the reopening of schools and the managing of Covid-19 risks.

Organising young people was and still is a tool that will bring liberation to our communities. The youth of 1976 risked their lives for a better education and society. They rebelled against the system and were willing to die for something they wouldn’t live to see. We must honour their sacrifice. We commemorate those of the past for giving us a path to even exist as a movement.

We must also draw strength and wisdom from youth in other African countries. For example, during the Arab Spring, in Morocco and Egypt, young people used political education gatherings, as well as protests, to advocate for change. Youth advocacy and organising were key.

Gathering young people in civic society spaces — to improve our own awareness of the current state of the country and reflect together on the importance of participating in democracy — is crucial for youth involvement in dismantling the oppressive inequalities that we face.

Thousands of EE learner members from schools in Tembisa and elsewhere in Gauteng, the Western Cape, Eastern Cape, KwaZulu-Natal and Limpopo, come together every week in their communities to learn and to strategise on how to tackle complex problems of inequality.

Alongside other Equal Education members, including post-school youths, parents and teachers, they are finding alternative ways to participate in the democratic system. These young activists (like us) are leading campaigns for progressive policy reforms. We are defending our rights and fighting for them to be realised.

This activism and sustained mobilisation has led to real improvements in education. Since we won the school infrastructure law in 2013, thousands of schools have received water, electricity and decent toilets, and hundreds of schools constructed with poor materials, such as mud and asbestos, have been replaced.

These victories were not easy — we have had to take to the streets often to demand accountability, and many more schools still need to be fixed. We understand that our struggle is long-term, and a generation younger than us will be the ones to really benefit from it. Through this activism, however, we have seen the impact that active and organised young people can have, and we have grown as young activists.

We dare to hope and continue to fight because we believe that it is a conscientised, organised youth who are the enablers of a just education system and society. DM