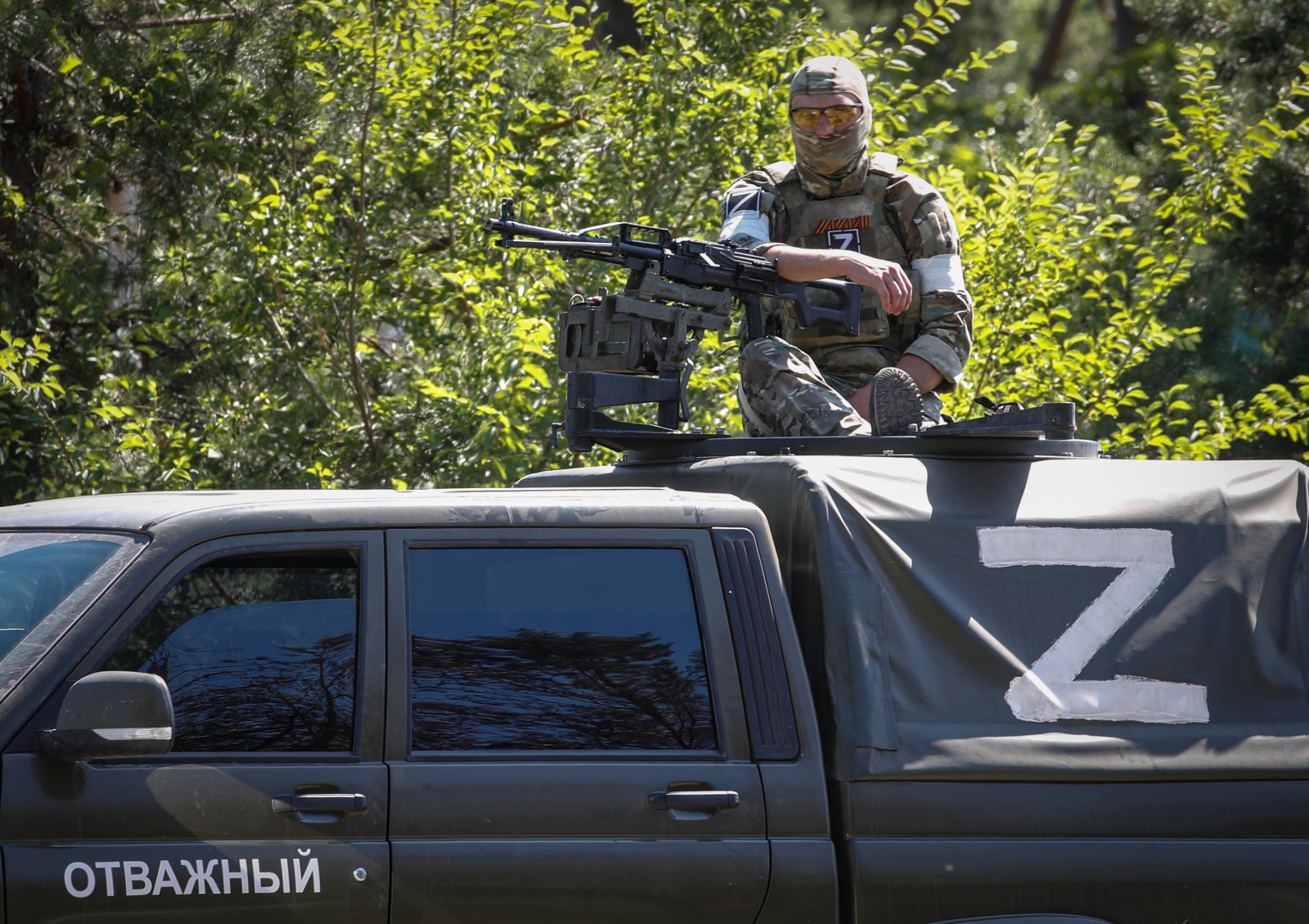 A Russian serviceman guards from a car with inscription 'Brave' and the letter "z' on it, on the road near the fortified positions of the Ukrainian army captured in battles, in Schastia, Luhansk region, Ukraine, 11 June 2022. EPA-EFE/SERGEI ILNITSKY

KYIV, June 14 (Reuters) - Ukraine said on Tuesday its forces were still holding out inside Sievierodonetsk and trying to evacuate civilians, after Russia destroyed the last bridge to the devastated eastern city in a potential turning point in one of the war's bloodiest battles.

Russia said it would give Ukrainian fighters holed up in a chemical plant inside the city a chance to surrender on Wednesday morning. Fighters should “stop their senseless resistance and lay down their arms” from 8 a.m. Moscow time, Interfax news agency quoted ​Mikhail Mizintsev, head of Russia’s National Defence Management Centre, as saying.

Civilians would be let out through a “humanitarian corridor”, he said.

The city’s Ukrainian mayor, Oleksandr Stryuk, said: “The situation is very difficult but there is communication with the city” despite the last bridge over the Siverskyi Donets river having been destroyed. “Russian troops are trying to storm the city, but the military is holding firm.”

Ukraine says more than 500 civilians are trapped inside Azot, a chemical factory where its forces have resisted weeks of Russian bombardment and assault.

Evacuations were still being carried out “every minute when there is a lull and there is a possibility of transportation,” Stryuk said. “But these are discrete evacuations, done one by one, and every possible chance is taken.”

Regional governor Serhiy Gaidai said: “The shelling is so powerful that people can no longer stand it in the shelters, their psychological state is on the edge. The last few days, the residents are finally ready to go.”

Both sides claim to have inflicted huge casualties in the fighting over the city, Russia’s main target in its battle for the east of the country after it failed to capture the capital Kyiv in March.

Ukraine still holds Lysychansk, Sievierodonetsk’s twin city on higher ground on the opposite bank. But with all the bridges now cut, its forces acknowledge a threat that they could be encircled in Sievierodonetsk. Russia’s separatist proxies said any Ukrainian troops left behind must surrender or die.

Damien Megrou, spokesperson for a unit of foreign volunteers helping to defend Sievierodonetsk, said there was a risk of leaving “a large pocket of Ukrainian defenders cut off from the rest of the Ukrainian troops” – as in Mariupol, the Black Sea port that surrendered last month after months of Russian siege.

The battle for Sievierodonetsk – a city of barely more than 100,000 people before the war – is now the biggest fight in Ukraine as the conflict has shifted into a punishing war of attrition.

Kyiv has said it is losing a staggering 100-200 soldiers killed each day, with hundreds more wounded. In an overnight address, President Volodymyr Zelenskiy described the battle for the eastern Donbas region – partly occupied by Moscow proxies since 2014 – as one of the most brutal in European history.

Russia gives no regular figures of its own losses but Western countries say they have been massive, as Moscow has committed the bulk of its firepower to delivering one of President Vladimir Putin’s stated objectives: forcing Kyiv to cede the full territory of two eastern provinces.

Momentum in Sievierodonetsk has shifted several times over the past few weeks – with Russia concentrating its overwhelming artillery firepower on urban districts to obliterate resistance, then sending in footsoldiers vulnerable to counter-attacks.

Bigger battles could lie ahead for the wider Ukrainian-held pocket of the Donbas, nearly all on the opposite bank of the river which Russian forces have found difficult to cross. Ukraine says Russia is massing to assault Sloviansk from the north and along a front near Bakhmut to the south.

It has pleaded for the West to send more and better artillery.

“What we don’t have enough of are the weapons that really hit the range that we need to reduce the advantage of the Russian Federation’s equipment,” Zelenskiy told Danish journalists at an online press briefing on Tuesday.

“Make no mistake, UKR requires support from the US & NATO,” he wrote. Ukraine “will win, but it will be a tough fight. And… supporters ought to understand the dynamics of what they’re facing.”

Beyond the Donbas, Ukrainian officials hope that Russia’s focus on capturing the east will drain its forces from other areas and pave the way for counter-attacks to recapture other territory.

Ukraine recaptured the area around its second largest city Kharkiv in May and has reported small but steady gains in recent days in the south, the biggest swath Russia retains of the territory it seized after its invasion in February.

Serhiy Khlan, adviser to the head of the southern, mainly Russian-occupied Kherson province, said Ukraine was having tactical success retaking territory there for a second straight week. Troops had already advanced 5 km (three miles) from Tavriysk, a town on the south bank of the Dnipro river east of Kherson city, and were gradually advancing, he said.

“We have tactical victories. They are turning into a counteroffensive. For the counteroffensive, we are waiting for the reinforcement of equipment from our partners,” Khlan said. Reuters was unable to verify any reports from the area.