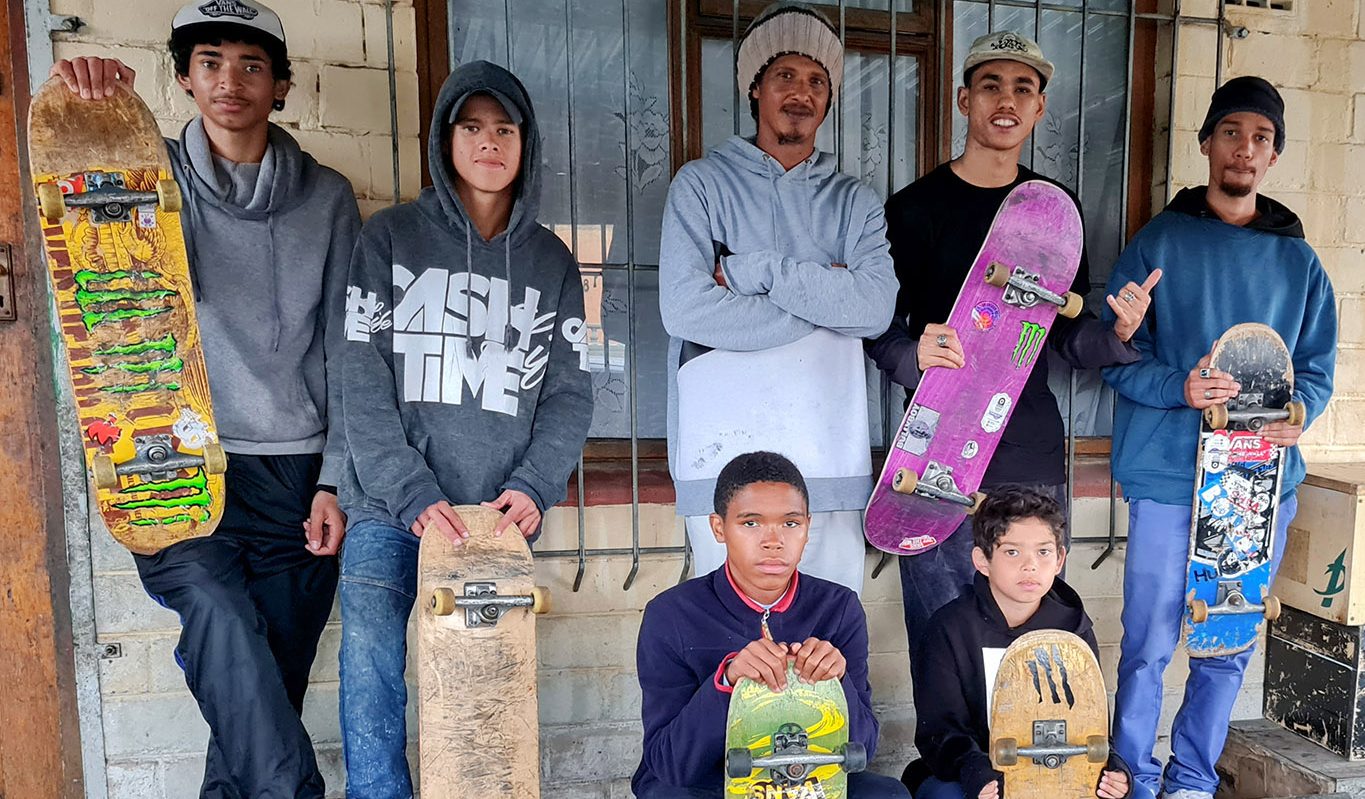 Some members of the local skateboarding group gather outside Recardo Ruiters’ house in Ravensmead, Cape Town. They are standing on and next to the ramps and rails they built themselves. From left to right: Jody Ross (17), Jordan Douwland (15), Rogann Snyman (seated) (14), Recardo Ruiters (41), Rylee Bantham (seated) (10), Chad Kleinsmith (23), Graham Clark (20). (Photo: Keanan Hemmonsbey)

By providing skateboarding lessons and a homemade skatepark, Chad Kleinsmith and Recardo Ruiters of Ravensmead, Cape Town, are keeping kids out of trouble and on the rails.

When you hear the clattering of rubber wheels on rough tar, the sound of wood scraping against wood and cheers from young voices, you’ve found your way to Rose Street in Ravensmead.

It’s a small, working-class suburb in Cape Town, 15 minutes from Cape Town International Airport. The neighbourhood — designated for “coloured people” during apartheid — is a crime hotspot and children are often tempted into trying drugs or coerced into joining gangs.

Chad Kleinsmith and Recardo Ruiters have started their own gang — of skateboarders who spend their time riding the streets, building ramps and teaching children in their community how to do “ollies” and other tricks.

“There’s a lot of kids tempted by the gangsters, drugs, because they look for somewhere to fit in. And we are trying to make our own positive wave for kids to fit in with,” says Ruiters.

Ruiters is 41 years old and has been skateboarding his “whole life”. He first stepped on a board while hanging out with friends in Cape Town’s city centre in the early 1990s, and now prefers to teach the kids in his community that there is more to life than some of the bad influences in their surroundings.

“I want to keep them positive, make sure they finish school and make a success of their lives… that’s my goal,” says Ruiters.

About 15 children visit Ruiters’ house in Rose Street every day — but not before their schoolwork is done.

“Recardo always says we can’t come and skate if we don’t finish our homework first,” says 10-year-old Rylee Bantham, one of the younger members of the group.

Kleinsmith picked up skateboarding when he started trying out his friend’s new board that he never used, “so he just gave it to me”, Kleinsmith says. That was more than 10 years ago.

Now Kleinsmith, 23, and Ruiters are the senior members of their “gang” of skateboarders. The group doesn’t have leaders because they believe they can all learn from each other.

“I started at the beginning of this year. I never had something that I was good at, so I started skating,” says 17-year-old Jody Ross.

“One day I saw Chad do a really cool skate trick and I also wanted to do that so I asked if I could join them,” says Ross.

Ruiters and Kleinsmith’s initiative started at the end of last year. They noticed how children in the neighbourhood looked up to them and decided to do something to help them.

“The kids started approaching us. They initially just started watching us and eventually they started joining in. We asked them if they want to try to ride and they gained some confidence.”

There are no skateparks in Ravensmead so Ruiters, with Kleinsmith’s help, built their own ramps and rails.

“At first we built it because we needed some things to skate on. The closest skatepark is in Edgemead, Woodstock, Cape Town… it’s out of our reach so eventually we had to build a park for ourselves,” says Kleinsmith.

“I guess that’s what sparked the interest in the kids, because they saw these things and eventually wanted to try it themselves. They realised if you learn and practice, you can actually make progress.

“Our usual spot is at the field [Florida park] on the netball courts. That is the only place that we have to put our stuff out, other than the streets,” adds Kleinsmith.

“The netball court is a bit cracked, but we sweep there and make it lekker. But we need a park… we need something for the kids.”

Ruiters’ experience working with wood came in handy, and he spent much of his time at his former job trying to figure out how to construct obstacles for their skatepark.

“I used to work at a woodworking and carpentry company. I saw how they put the stuff together. I started with my boxes and my rails. I saw how the skateparks look and I got someone to weld the things together,” says Ruiters.

Unlike in some neighbourhoods, where skateboarders are stereotypically seen as rebels, in Ravensmead they are seen as idols for younger children to look up to.

“Out there you will hear that skateboarders are like hooligans, but here in the community the people know the value and the worth of it to learn and know they can get better at something, rather than just being on the street,” says Kleinsmith.

Kleinsmith and Ruiters say growing up in Ravensmead is not easy and they are trying to be a positive influence by creating a safe haven.

“The kids will come here, they all meet up [at Rose Street]. They have boards or they share boards if they don’t have… We never chase anyone away who wants to learn,” says Kleinsmith.

“We’re supporting our community. When the aunties see the kids doing these [skate tricks], it really provides a different perspective,” he adds.

Parents from around Rose Street send their children to Kleinsmith and Ruiters without hesitation every day, knowing that they are staying out of trouble and away from the temptations of the area.

“I’m so happy they do this because it keeps them out of the street and they don’t try things… they are here every day,” says Recardo’s mother, Valery Ruiters, as she watches the children skating in front of her house. DM/MC