My message to other cancer patients: ‘Never give up… and it’s okay to cry’ 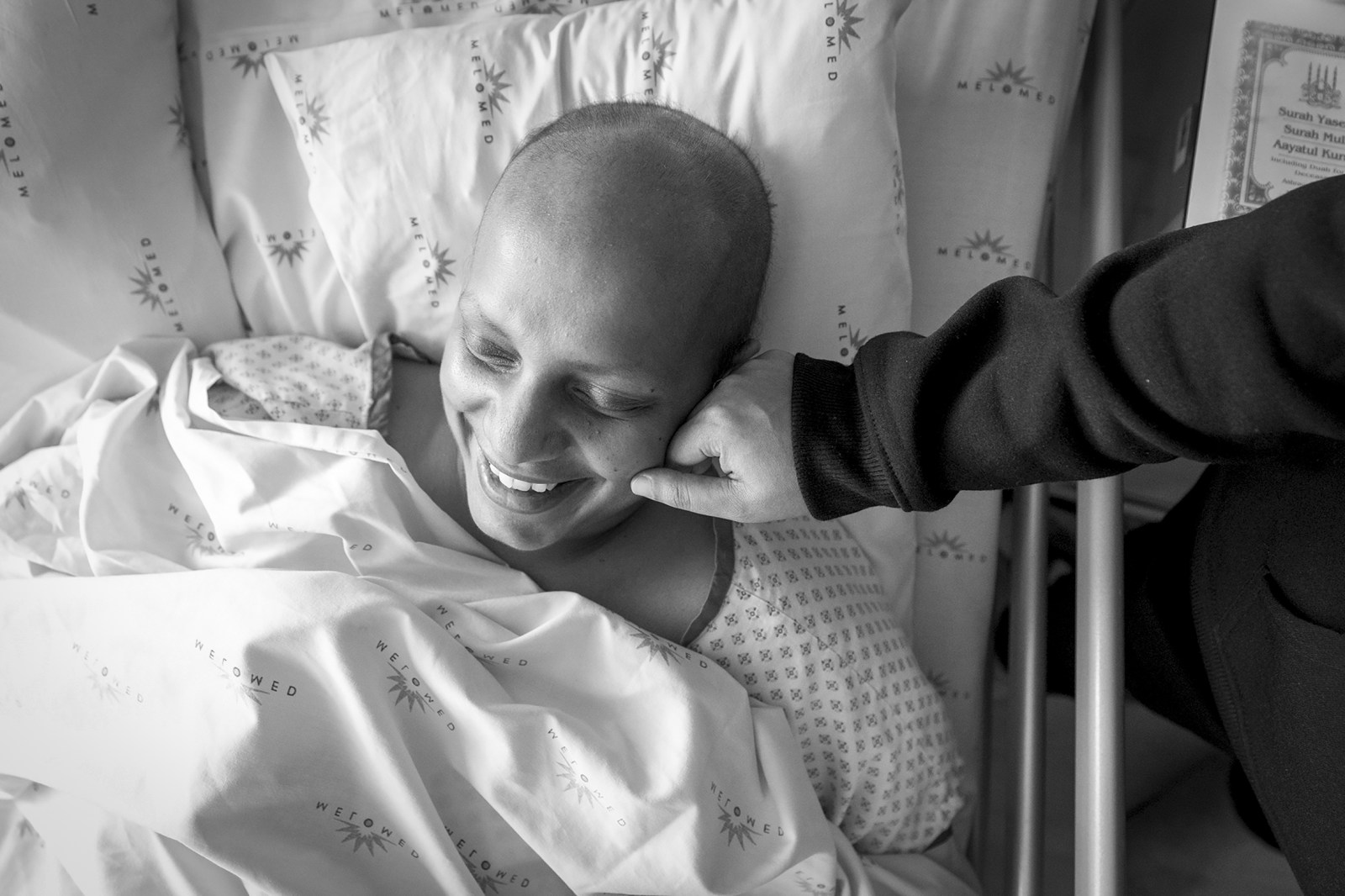 Nasreen Raschid (37) shares a moment with her sister Rehana. She says her family and friends have been massive with their support in her battle. (Photo: Shiraaz Mohamed)

Nasreen Raschid, a 37-year-old Western Cape resident and single mother of two, lost her mother and grandmother to cancer. Now she has invasive ductal carcinoma, the most common form of breast cancer, but she remains brave and hopeful.

Daily Maverick spent time with Nasreen Raschid while she was recovering from breast-conserving surgery in a Cape Town hospital. Despite being in an enormous amount of pain, from the way she interacted with those around her, it was evident that she has a bubbly personality and is a fighter.

“I felt a lump on my left-hand side under my arm, last year, January or February. I kept ignoring it and it just got bigger. I was like, ‘Oh no, it’s probably just swollen.’ I thought it was a gland that would go down if I stood in the shower for a while.

“My best friend, Fatima, told her mom about it, and her mom was like, ‘You have to go for a mammogram.’ But I was just like, ‘Yes, Aunty Soraya, I’m gonna go, I’m gonna go… that is how people just brush the situation off. And then a couple of days later, her mom [Soraya] passed away. And because of that, I actually went for a mammogram.

“And then in the mammogram, I could see the look on the nurses’ faces. They were like, ‘No, no, no, you need to go for an ultrasound.’

At the ultrasound, there were four or five different radiologists trying to distinguish what it was. And then I asked them the question, ‘Is it cancer?’, but they said, ‘No, don’t worry, everything’s gonna be okay. They told me I needed to return to do a biopsy the following day.

“At the biopsy, they looked at each other and I asked what’s wrong. The main radiologist came and said, ‘Ms Raschid, I need you to be booked into hospital as soon as possible.’ The following Monday, my doctor called me to say I have invasive ductal carcinoma (IDC), which is aggressive triple-negative cancer, and that’s how I found out I had cancer.

“So, before… before the doctors said anything, when my best friend’s mom told me to go for the mammogram, I said yes, just to give her peace of mind, because she was like my second mommy. But I knew for a fact that I didn’t want to go because I know what happened to my mom and my gran.

“I was just scared. Just before I got the news I was agitated, I was irritable and something told me, it’s going to be cancer, because the Friday after the biopsy I came out and I cried. Fatima was waiting for me in the car. And she asked what’s wrong. I said, ‘I know it’s cancer, I know it’s cancer.’ I cried my heart out but no one seemed to understand what I was going through.

“When the doctor phoned me there was no one around me. I cried and the only person I could think of was Fatima and my dad. I phoned my dad in Joburg and just cried. He asked me, ‘What’s wrong, my baby?’ and I said, ‘Daddy, I got cancer.’ And then he broke down. When Fatima came home, I said, ‘Fatima, I’ve got cancer, I’ve got cancer… I don’t know what to do.’

“I just felt so overwhelmed. She said to me, ‘Naz, you are the chosen one. Because look at your mom, your mom had cancer, your gran had cancer and now you have it. So with this, all we are going to do is, we say Alhumdulilah [praise be to the Almighty].’ And I have been living by those words, I just say Alhumdulilah, with every pain, even though I cry. I say Alhumdulilah because this was given to me by the Almighty and I accept it.

“But I wasn’t angry. That’s the one thing that I am proud to say. People might think I am weird in saying that, but I wasn’t angry that I had cancer. I just didn’t know how to deal with the emotion of it.

“I had very, very long, beautiful hair. Everyone called me ‘Rapunzel’ and my biggest fear was having my hair fall out, because that was what made me, me. When people saw me, they would see Rapunzel. I cut my hair short and I thought, okay, you know what, it’s not going to fall out. But it started falling out and that was so emotional for me.

“It was the biggest thing as a female that got me down, my hair. And then afterwards I started wearing a cap, going here, going there. Because I was embarrassed to walk around with no hair. I still had eyebrows though.

“But it just got so extremely hot and I just stopped wearing a cap. I never wore a beanie or a scarf because they both made me hot as well. I even tried on a wig and that too was just too hot.

‘I hope to inspire others’

“Don’t feel sorry for me, I wish to inspire other females not to give up and that it’s okay to cry. It’s okay not to have hair, because hair doesn’t make you a person. Your heart does, your personality does.

“After my hair loss, when friends video-called me, I was like, ‘I don’t look the same.’ They were like, ‘We don’t care.’ I am still exactly the same person that I was two years ago, three years ago, just without hair and now without eyebrows. But I refuse to draw on eyebrows and I refuse to wear a cap or a wig because I have become so comfortable in my own skin, in my own features, that this is who I am.

“So, go for the test. Be happy, have a proper support system, because a support system is the main thing. Those around you will never know the pain that you’re going through unless you tell them.

“My biggest mistake in the beginning when I had chemo was when they asked me how am I doing. [I said:] ‘Oh no, I’m fine.’ But then I struggled with pain. And one day Fatima shouted at me, asking, ‘How am I supposed to know what pain you are going through? If you don’t tell me because you are different, you are now more delicate.”

The Cancer Association of South Africa’s (Cansa’s) Lorraine Govender said it was crucial to have a support structure.

“It’s a great comfort to be part of a caring community, especially when you are fighting for your own or a loved one’s life. A cancer diagnosis can be daunting, and treatment hard to bear. We recognise the importance of support groups for cancer survivors, caregivers and loved ones and offer support groups. Members interact with others who have a real understanding of their life experience, and mutual sharing of coping strategies and valuable information may take place.”

Govender said it was important to check for early signs of cancer.

“We encourage women and men to have regular health check-ups, as well as cancer screening. We know that early detection is key to enabling effective treatment and a better chance of recovering from cancer.

“If you are experiencing symptoms which concern you, it’s vital to have them investigated by a health professional as soon as possible. It’s also important to know what screening options are available to you, especially if you have a family history of cancer.

“If any women have breast cancer symptoms, it’s so important to present to health practitioners and get checked out sooner than later, as this can lead to an early-stage diagnosis that results in better breast cancer treatment and survival.”

Breast cancer is the most common form of cancer among South African women and the National Cancer Regulatory lists (stats from 2019) the top five cancers affecting women as breast, cervix, colorectal, uterus and Non-Hodgkin’s lymphoma.

With a will to survive, Raschid thanks those around her for their support.