Zimbabwe hints at sending dictator Mengistu back to Eth... 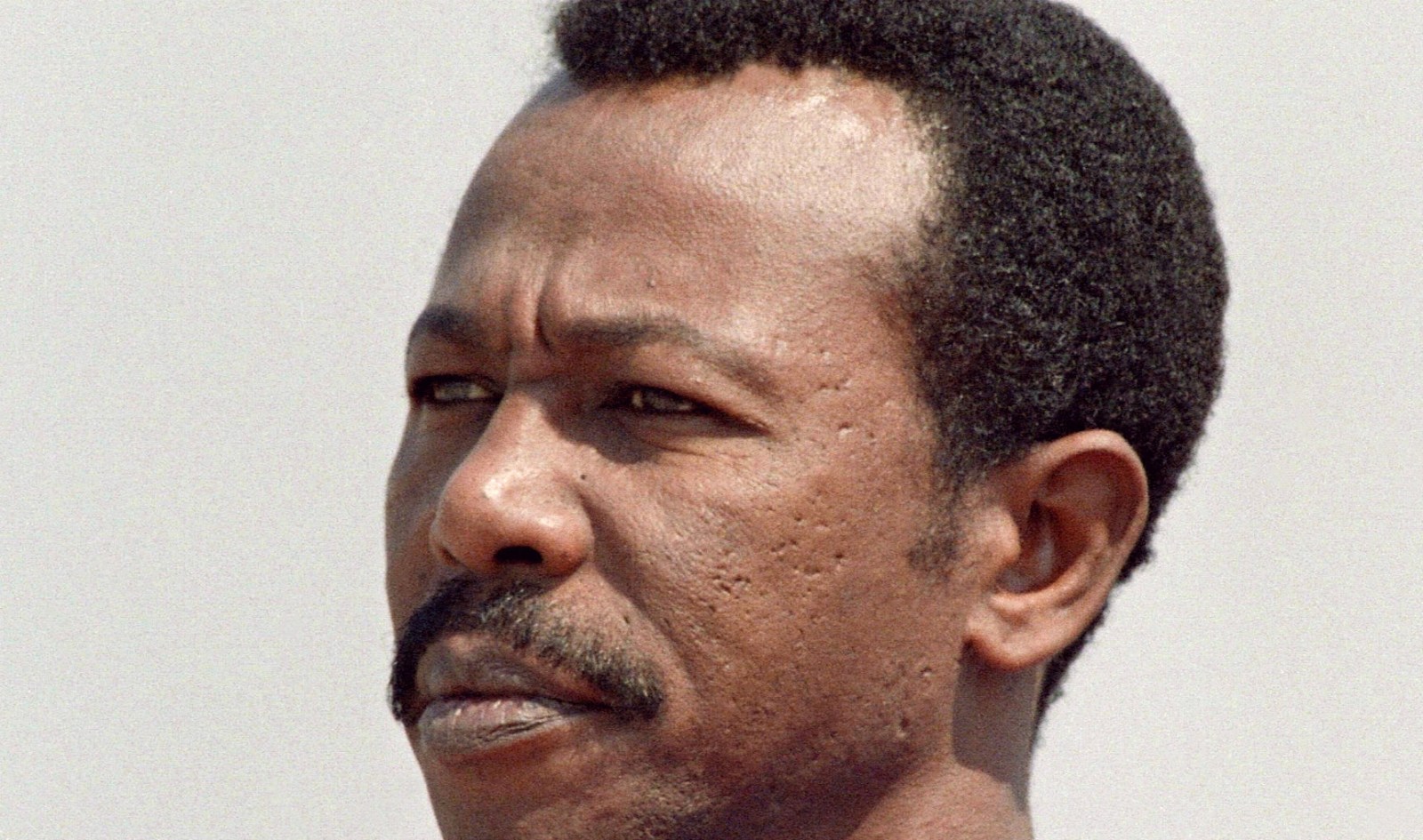 Former Ethiopian dictator Mengistu Haile Mariam at a welcoming ceremony on the eve of a non-aligned summit in Harare, Zimbabwe, in September 1986. (Photo: Alexander Joe and Dominique Faget / AFP)

Is it just more Zanu-PF smoke-and-mirrors and deception? Some suggest it’s meant to deflect criticism that Zimbabwe is harbouring genocidal killers.

Is Ethiopia’s former brutal dictator, Mengistu Haile Mariam, about to be sent home at last, after three decades of asylum in Zimbabwe, to serve the rest of his life in jail for genocide?

Shava’s remark has sparked considerable interest and speculation about a possible radical about-turn in Zimbabwe’s policy. After long-time Ethiopian Emperor Haile Selassie was toppled in a military coup in 1974, Mengistu, an army colonel, then seized power in 1977 with the support of the All-Ethiopia Socialist Movement, a Marxist-Leninist group. He ruled Ethiopia with a bloody, iron fist as a one-party Marxist dictatorship until 1991, when he in turn was ousted.

He then fled to Zimbabwe, where his friend and fellow autocrat, President Robert Mugabe, gave him sanctuary and whence the ruling Zanu-PF has so far resisted all efforts to send him home to face justice.

In 2006, he was tried in absentia in Addis Ababa, found guilty of genocide and other charges after a 12-year trial and sentenced to life in prison. His main offence was directing the “Red Terror” in the late 1970s to try to eliminate his political opposition, mainly the Ethiopian People’s Revolutionary Party. Tens of thousands of opponents were killed or tortured.

But Mugabe still refused to send him back to face trial or serve his sentence.

Mugabe himself was ousted in a palace coup by Vice-President Emmerson Mnangagwa in November 2017, but he too showed no signs of surrendering Mengistu.

But is it? Zimbabwe commentators are rather bemused but also sceptical.

“What you have to understand about the Mnangagwa regime is that it’s all about smoke and mirrors and deception,” says opposition politician and lawyer David Coltart.

He notes that the cheerful woollen scarf in national colours that Mnangagwa always wears on public occasions is “emblematic of what goes on in his government. It is literally sheep’s clothing on the wolf. In relation to Mengistu, it’s part of exactly the same strategy.”

He and other commentators believe Shava mentioned the vague possibility of extraditing Mengistu only to deflect criticism that Zimbabwe was harbouring genocidal killers. This was prompted by the International Residual Mechanism for Criminal Tribunals, which is still pursuing the leading perpetrators of the 1994 Rwandan genocide, recently discovering their most wanted suspect, Protais Mpiranya, had died in Zimbabwe at the age of 50 in 2006 and had been buried in Zimbabwe under a false tombstone.

“They have been deeply embarrassed by the UN revelation,” Coltart said. “And Mengistu has been a guest of this country for decades. And so I think this is designed to try to deflect criticism… I would be very surprised if they released him. I think their intention is to deflect, let the dust settle and then they can get on with their lives”.

This interpretation is reinforced by the fact that Shava’s hint that his government might favourably consider an extradition request came in the context of questions by the VOA journalist about Mpiranya.

Shava denied any suggestion that Harare was a safe haven for genocide fugitives and insisted that his government had not been aware that Mpiranya had been in the country until the UN Mechanism found his body.

But DM168’s well-placed sources suggest it is highly unlikely the Zanu-PF government did not know Mpiranya was in Zimbabwe. They said they believed he had met military officers in the Democratic Republic of Congo in 1998 when both were engaged in repelling an attack on then president Laurent Kabila’s government by Rwanda. The Zimbabwean military officers had then invited him to settle in Zimbabwe.

Shava told VOA that Harare had “fully cooperated with the UN Residual Mechanism” in its investigation of Mpiranya. And it does seem true at least that after the Mechanism’s prosecutor, Serge Brammertz, had criticised Zimbabwe in the UN Security Council, Harare increased its cooperation. This might, though, have been part of Mnangagwa’s efforts to thaw relations with the international community in the hope that it would lift remaining sanctions on Zimbabwe.

In the end, Brammertz’s team discovered Mpiranya’s body by its own good sleuth work, including coming across the false name under which he had been buried, in a sketch of his tombstone on a computer.

The same goal of winning international approval – or perhaps deflecting disapproval – might have motivated Shava to hint at a possible extradition of Mengistu. He told VOA: “We are not harbouring Mr Mengistu. We have allowed Mr Mengistu to stay in Zimbabwe since he fell out with his people in Ethiopia. It was not a conspiracy; everybody knew he was coming here with his family, and there is no comparison with what you are asking about [about Mpiranya].”

In Addis Ababa, however, there are doubts whether the government of Prime Minister Abiy Ahmed really wants Mengistu right now, since it is so preoccupied with its war against Tigrayan and other dissidents.

In 2018, former Ethiopian prime minister Hailemariam Desalegn had a strange meeting with Mengistu in Harare. Desalegn – just months out of office – was in Zimbabwe as head of the African Union’s mission observing Zimbabwe’s elections. His officials tweeted a picture of him with Mengistu without explaining what they had discussed in their meeting. DM168