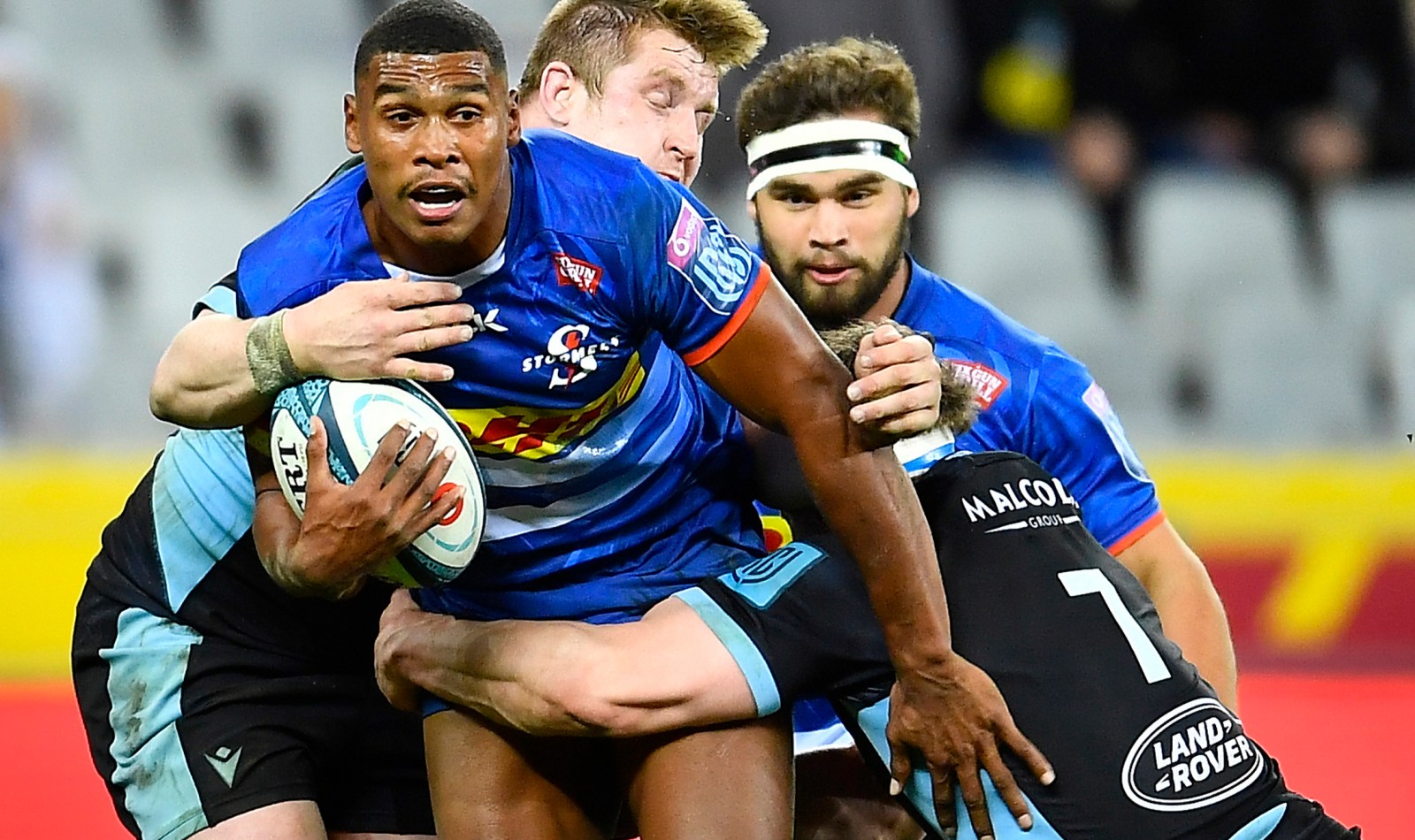 Damian Willemse of the Stormers during the United Rugby Championship match between DHL Stormers and Glasgow Warriors at DHL Stadium on April 22, 2022 in Cape Town, South Africa. Willemse will miss out on Stormers' quarter final clash with Edinburgh due to an arm injury.(Photo by Ashley Vlotman/Gallo Images)

The United Rugby Championship reaches the business end this weekend with the Bulls, Sharks and Stormers reaching the quarter-final.

It’s almost the perfect scenario for South African rugby with three of its four teams in the quarterfinals of the inaugural United Rugby Championship (URC) after two years of struggle.

Covid-19 impacted all sport and South African rugby was not spared. In an ever-changing landscape, South African players endured two frustrating seasons of local derbies until the URC came along.

And while the early stages of the current 2021/22 URC were plagued by postponements due to Covid, no fixture was cancelled and the entire match programme was ultimately completed. That was a minor miracle, but it is also a compliment to the organisers, players, coaches and clubs to do everything possible to ensure the tournament’s integrity in its first year.

The upshot has been a very successful debut season which has quickly established the URC as a key tournament on the global calendar. And the major reason it has been so well received is that the four South African participants — the Bulls, Lions, Sharks and Stormers — have been competitive. In some cases, they have been dominant and that has raised the standard of the competition.

South Africa’s leading teams have been almost unbeatable at home with 22 wins and only two losses between the four franchises. But they fared less well on the road with nine wins, 14 losses and one draw. A full analysis can be found here.

Still, they have been excellent. Players are happy and the days of slogging through nine or 11 time zones to Australia and New Zealand, dopey with jet lag and then expected to compete, are gone.

Now with three sides in the last eight and a guaranteed semi-final, because the Bulls and Sharks clash in the quarterfinals, the early teething problems of the move north seem irrelevant.

It really does feel, with this weekend’s knockouts, that the URC is coming of age as a vital, global competition.

Battle for the semis

The Stormers ended second on the overall log, ensuring that they will have home ground advantage at the Cape Town Stadium in the quarterfinals and the semis beyond that if they advance.

They host Edinburgh on Saturday and will have to do it without brilliant playmaker Damian Willemse.

The Boks’ World Cup winner has been ruled out for the remainder of the URC with an arm injury. It is likely to cost him a Springbok place as well. It’s a massive blow for the Cape Town club at this stage of the tournament.

“We gave Damian as much time as we could to make it for this match, but in the end it was not worth the risk, especially as we have a quality player in Rikus to start at 12,” Stormers coach John Dobson said.

“It also gives the talented Sacha Mngomezulu an opportunity to show what he can do when he comes on.”

The Stormers, with a strong pack spearheaded by Bok props Steven Kitshoff and Frans Malherbe should be able to build a strong foundation for their enterprising backs — even sans Willemse — to ask serious questions of the Edinburgh defence.

The Stormers have made more clean breaks than other side in the competition and in wing Leolin Zas, they have the leading try-scorer with 11 in 18 matches.

Edinburgh though, have the best numbers when it comes to defenders beaten. The numbers suggest an open, attacking contest. But knockout rugby often has a way of making teams play more conservatively.

The sides played to a 20-20 draw earlier in the competition but since then the Stormers have been on a remarkable run, winning their last eight matches.

Edinburgh though, have only lost once to South African opposition and recorded one of only two wins by foreign teams in SA when they beat the Sharks 21-5 in March. They are a formidable team.

The Bulls and Sharks are set for a tough struggle at Loftus with home side leaders in offloads (217) indicating that their blueprint is slightly different to the perception about them. The Bulls like to keep the ball in hand and engage defenders.

The Sharks have struggled for consistency, but they have such a star-studded lineup that there is always a feeling they were one moment away from everything clicking.

The Sharks beat the Bulls 29-22 at Loftus in February and despite going into the match as underdogs they will be quietly confident.

“The Bulls have really got into their stride the last few games, but I think we’ve been bearing it up from day one,” Sharks captain Thomas du Toit said. “We’ve had a few hiccups here and there, but we’re really going forward and we’re bettering ourselves every week.

“The Bulls are not one-dimensional, well not anymore. The Bulls from the past were definitely a little bit easier to deal with or understand, but now they’ve got a bit of variety into their game.

“We have faced them twice already, so we are very much prepared in the sense of knowing what’s coming, but every game’s a different game and they will bring a different scenario to it and a different context — this is a quarter-final so it’s a little bit different.”

Bulls lock Walt Steenkamp said his side were wary of the Sharks pack, especially their scrumming power.

The Sharks have a big scrum,” he said. “The last time we played them, I think we gave away about four or five penalties in that area.

“So, this week, that is part of the things we have worked hard on. That is a big area we will need to be focused on.

“Then we will also need to focus a lot on our own game. It will also be important for us to maintain our discipline.

“Their pack as a whole is very good. We can try to put some pressure in the line-outs, but they are a great pack as a whole and there are no weaknesses in their team.” DM