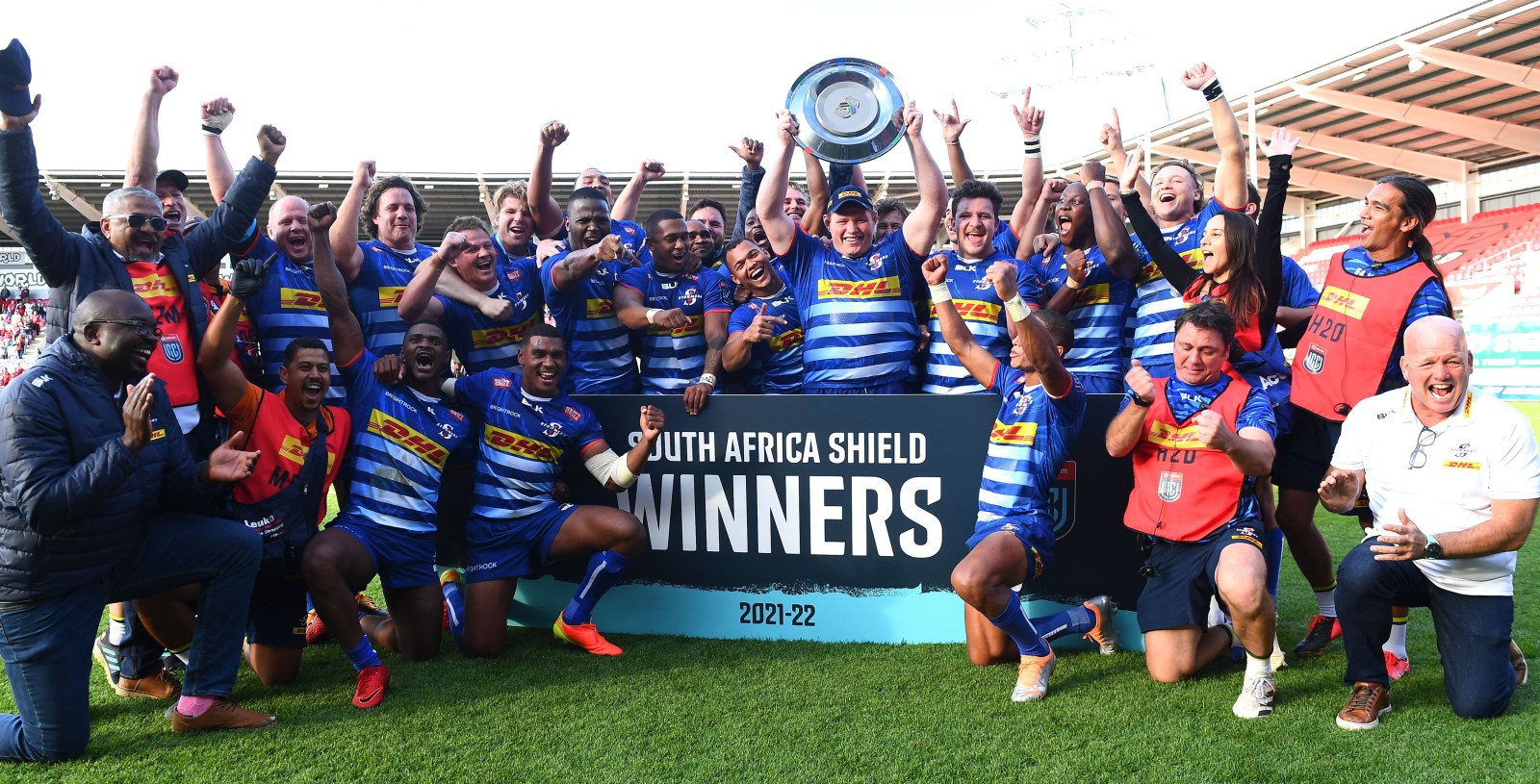 South Africa’s away performances in the United Rugby Championship demand greater scrutiny ahead of the Bulls, Sharks and Stormers’ debut in the European Champions Cup. The local teams’ dominance at home – particularly against Welsh clubs – bodes well for the future.

There’s good cause for South African rugby to celebrate as the inaugural United Rugby Championship (URC) tournament draws to a close.

Three local teams will advance to the URC playoffs. The Bulls, Sharks and Stormers have also qualified for the next instalment of Europe’s elite club tournament, the Champions Cup. Few would have bet on such an outcome at the start of the competition last September.

The Stormers will host Edinburgh in Cape Town in the quarterfinals, while the Bulls will battle the Sharks in Pretoria. The URC league results tell a story about a tournament dominated by home teams – particularly in the cross-hemisphere clashes – and it’s for this reason that the Stormers and Bulls will be favourites to progress to the semifinals.

The Stormers, who finished the league phase in second position and secured home advantage for a potential semifinal, are ideally placed to advance to the decider. But South Africa’s top teams remain dark horses for the title itself. Irish giants Leinster are favourites to lift the URC trophy and reaffirm their status as the trendsetters of this division.

A closer analysis of the URC league results offers up some interesting findings. The away results in particular pose important questions ahead of the Bulls, Sharks and Stormers’ debut in the Champions Cup later in 2022. 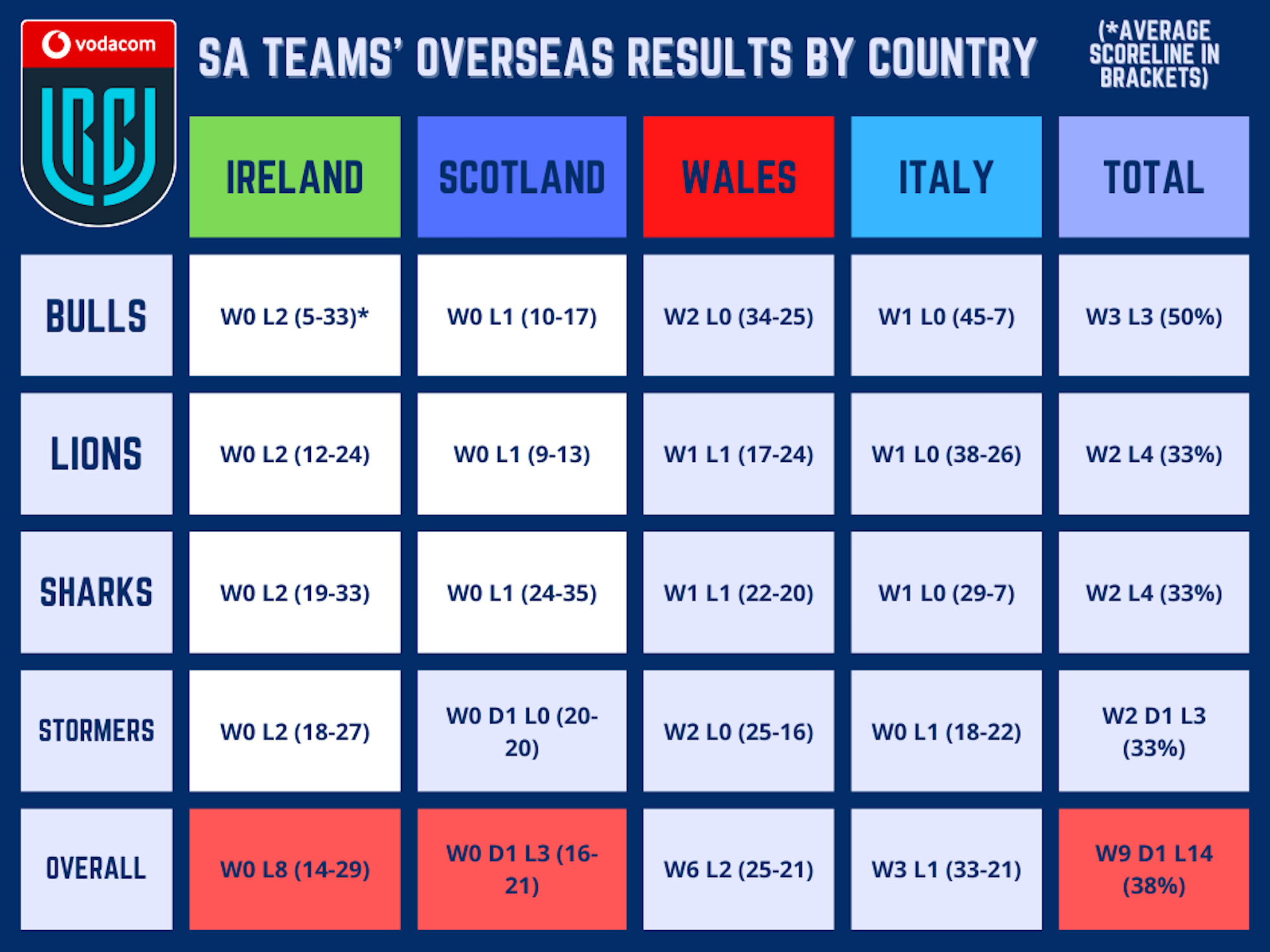 While the four local teams combined for 22 wins in 24 matches on South African soil, they were routinely outplayed in Europe by the Irish and Scottish clubs – who have long set the standard in the Pro14 and Pro12, the tournaments that preceded the URC. It won’t get any easier for the Bulls, Sharks and Stormers next season, when they are pitted against the best English and French clubs as well as the Celtic elite.

Migrating to a European tournament – and shifting to a northern-hemisphere season – has presented significant challenges for the South African teams.

The four franchises toured Europe in September and October last year without their Springboks – who were on national duty. Similarly, many of the northern-hemisphere clubs were without their Test stars when they toured South Africa in March and early April, as these players were rested or unavailable on the back of a taxing Six Nations campaign.

It was only in mid-April and May when the URC delivered more “strength-versus-strength” contests, with game-breaking internationals from both hemispheres on show. And yet, there were a few examples of teams such as Leinster sending weakened sides to South Africa in order to better manage their resources across both the URC and Champions Cup – which run concurrently.

Whatever the context, the South African teams’ results in Ireland and Scotland during the URC don’t make for pretty reading.

Overall, the four South African franchises combined for nine wins in 24 matches staged in Europe over the course of the URC league phase (38%). In Ireland and Scotland, however, the South African collective failed to record a single victory – as they slumped to 11 losses and a draw.

The Sharks’ recent loss to Ulster marked South Africa’s eighth straight defeat to an Irish club. The average scoreline across those eight fixtures was 29-14 in favour of the home team.

The Bulls were the least competitive South African side in Ireland, and this begs the question of how they might fare if they’re asked to travel to Ireland for a semifinal or final in the coming weeks, and how they might perform against top Champions Cup sides in England and France later this year. 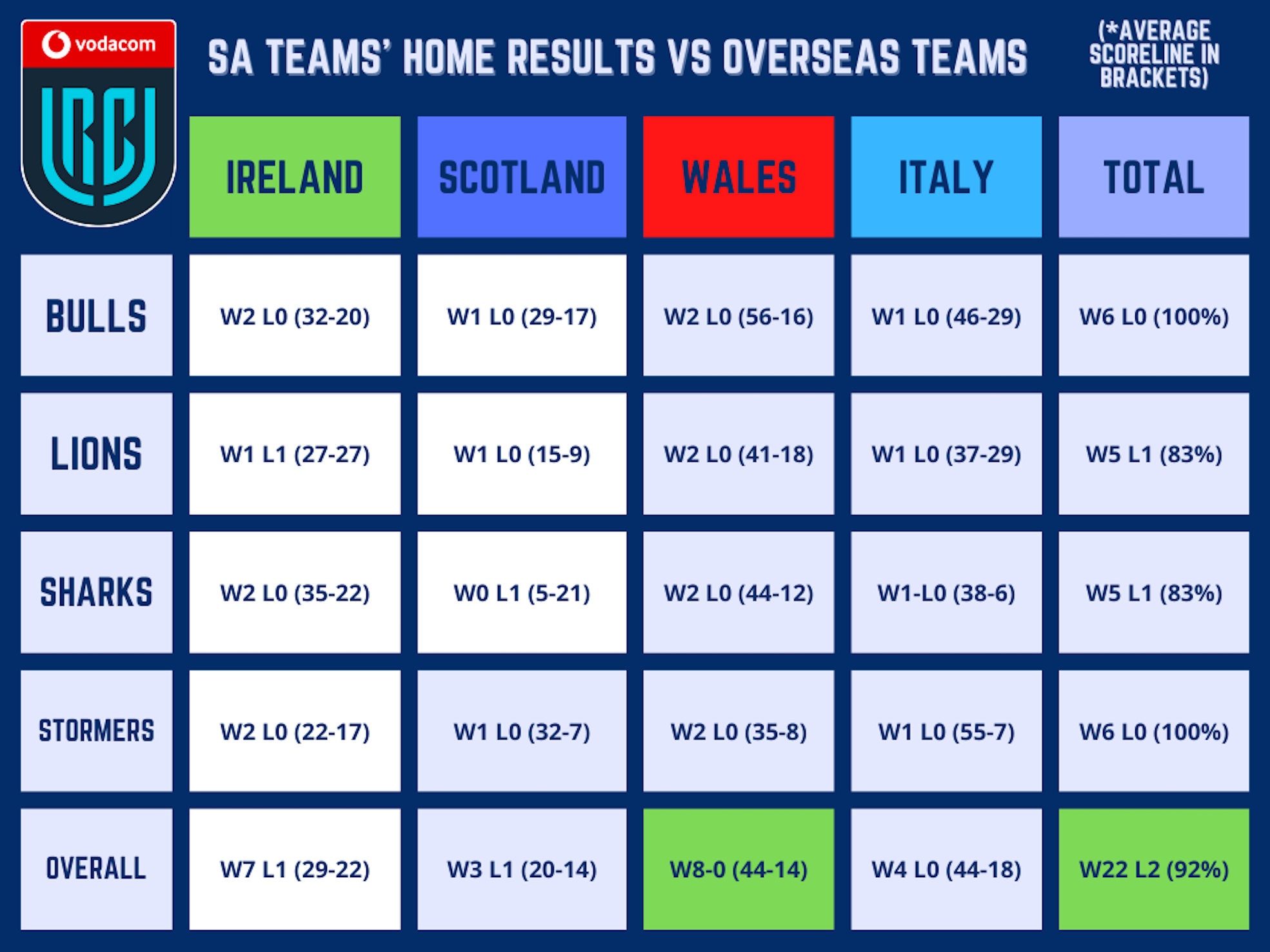 While the South African teams were more competitive in Edinburgh and Glasgow, the Stormers were the only side to avoid defeat. Much has been said about the conditions as well as the refereeing style in Europe over the course of the URC tournament, and the local teams should be better prepared for these challenges next season.

The same could be said for the European teams following their disappointing tours to South Africa. By and large, the northern-hemisphere teams failed to cope with the summer heat as well as the effects of altitude in Johannesburg and Pretoria.

Connacht beat the Lions at Ellis Park, while Edinburgh outmuscled the Sharks in a rain-affected match in Durban. Apart from those two results, the South African teams dominated the tourists.

The Bulls maximised their home conditions to devastating effect. Jake White’s charges claimed six straight wins against foreign opponents, and their dominance during this period is highlighted by an average scoreline of 41-21.

While that average is boosted by emphatic results against weak Welsh and Italian clubs, the Bulls did average an impressive 32 points per game against highly vaunted Irish opponents such as Munster and Ulster.

The Stormers also managed to finish this part of their campaign with a flawless record. They have plenty to rectify if they are going to compete abroad next season, but it’s fair to say that their home form stands them in good stead ahead to perform in Champions Cup clashes against top teams from Ireland, England and France.

Springbok coach Jacques Nienaber will be pleased with the performances of the Bulls, Sharks and Stormers in the inaugural URC, and the fact that three South African teams have qualified for the Champions Cup.

That said, Nienaber will cast his net wide when selecting a squad for the three-Test series against Wales this July. Roughly half of the group – which will include most of the Boks who won the 2019 World Cup final and then beat the British & Irish Lions in 2021 – will comprise players based in Europe and Japan.

Wales coach Wayne Pivac won’t have the same reinforcements at his disposal. As many as 28 of the 33 players selected for the tour to South Africa play their club rugby in Wales.

Welsh rugby has made headlines for all the wrong reasons in recent months, with the administration and national structure under scrutiny. Unsurprisingly, none of the Welsh clubs has qualified for the URC playoffs this season.

The Bulls put more than 50 points past the Dragons and Scarlets at Loftus Versfeld during the URC. Some are predicting a similarly one-sided result when the Boks host Wales at the same venue on 2 July. DM168